As some of you know, the Mojo staff migrates around the country throughout the motorcycle show season. During this time, we get to meet with a lot of incredible people undertaking remarkable challenges. Many of their stories have made it into the magazine over the years, and so this gypsy lifestyle we temporarily endure, in many ways fuels our magazine and our creativity. On a personal level, I’ve always found inspiration and motivation from this time away from home. And I’m not alone.

During the 2015 Vancouver Motorcycle Show, I met a group of people travelling from Germany by motorcycle who also sought inspiration on the road. They had departed from Halle (Saale), in late summer 2014, ridden east across Europe, then through Kazakhstan, Mongolia and Russia. Their ultimate goal is to cross North America and end in New York. 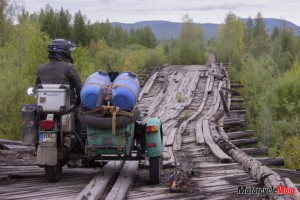 It sounded almost straightforward when I laid it out in my head, but with each question I posed, the answer would cause my mouth to gape a little further until my chin finally came to rest on the table.
While sitting with Efy, Kaupo, Anne, Johannes and Elisabeth, I listened intently to their story, each one picking up where the other’s sentence left off, and never speaking over one another.

They explained their motorcycles for this expedition were a pack of 1980s Russian-made Ural 650 sidecar rigs, each named by the group to match its unique peculiarities. A strategic choice, given they’d be travelling across Mongolia and Russia, where spares should be easy to find, along with help, as they had very limited mechanical knowledge – at least at the start, that is. In fact, most had just gotten their motorcycle licences at the time of departure.
The trip was planned in stages. Part one of the journey had taken them 5000 km east through Austria, Hungary, Serbia, Bulgaria, Greece, Turkey and then up to the Georgian Republic. It was there, near the Georgian settlement of Tserovani, that they made their first winter camp in late November 2014. Their progress to that point was not what you’d call rapid, more like an exploratory pace. 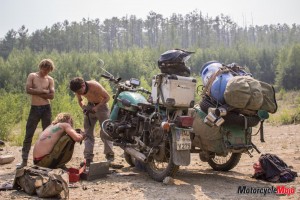 Delays due to mechanical problems with the Urals set them back a little, but also made them expert mechanics, as wrenching on the bikes had become part of their everyday routine. When I had the opportunity to sit down with the group, one of them explained the difficulty of crossing international borders without fingerprints; it seems handling enough fuel and oil while rebuilding Ural engines can in fact cause you to lose your identity.

The more they told me about their travels and the inspirations for them, the more ironic the missing fingerprints became. You see, this group had met through university and are all artists in their own right. They’re a collection of young, creative, energetic and extremely motivated people. I’ll tell you now that they’re also very intelligent, because you may not believe me after you read about their future intentions.

By embarking on this trip, they never intended on leaving their professions behind; rather, they planned to make the world their studio. They would do it as a group, depending on each other, learning skills along the way and experiencing life without the bubble wrap and safety warnings that are strangling their generation. If something needed saying, it was done face to face; if a problem arose among the group, there was nowhere to hide from it, no text message or social media to mask their true feelings. Their individuality, like their fingerprints, faded slightly as the well-being of the group took precedence. Nowhere was that more evident than on the second leg of their journey. 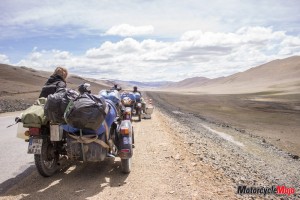 Listening intently to the group, I assumed they’d ridden across to the east coast of Russia, sailed to Canada and were preparing to travel the rest of the way to New York, but I was so wrong.

After leaving Georgia in March 2015, they had in fact made it to Russia, travelled across Kazakhstan and Mongolia, then back into Russia and Siberia. The last portion of this second stage would take them to far eastern…