When a segment of society and a commonality of product come together, it usually means an organization of like-minded people is formed. And so it wasn’t long after the motorcycle was introduced to the masses that the Manitoba Motorcycle Club formed, and is now the oldest riding club in Canada. 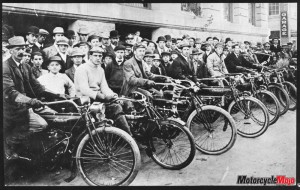 Known as “Chicago of the North” in the early decades of the 20th century, Winnipeg was the third-largest Canadian city before the First World War. This
Manitoba metropolis featured the ever-expanding Exchange District, and the city served as a hub for shipping goods both north and south, east and west. At one time, Winnipeg had more than two dozen rail lines meeting near its core. Not only was Winnipeg an important wholesale business and shipping centre, it was also home to a burgeoning population of motorcyclists. On February 21, 1911, approximately 40 riders met up and formed the Manitoba Motorcycle Club, with a mandate of hosting social activities, competitive events and essentially promoting the sport of motorcycling. Still in existence after 105 years, past club president and lifetime member Ross Metcalfe says the MMC is the oldest such group in Canada, and could be the fourth-oldest motorcycle club in the world – and that makes it a legend in our books.

“Motorcycles were a huge deal here before the First World War,” Metcalfe explains as he gives some background regarding the MMC. “There were no less than a dozen outlets in Winnipeg where you could buy a motorcycle, from a Flying Merkel to a Cyclone and all kinds in between.” Metcalfe says that in 1908, when the Traffic Act came into effect, there were at least 265 motorcycles registered in Manitoba, noting that “Bikes were here big time in ’08, and even more so in 1911, when the MMC was formed.” 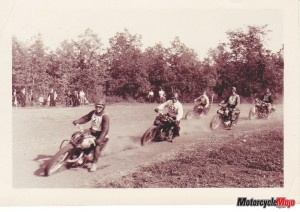 Metcalfe has extensively researched the state of the motorcycle industry in Winnipeg prior to the war. He says dealers were importing machines by the dozens in the spring of 1913, including Harley-Davidsons and Indians. He already mentioned Flying Merkel, but notes that Dominion Cycle on Logan Avenue offered the high-end motorcycle for a price of $360 (plus $15 if credit was required). Marsh-Metz motorcycles were available for $285 through the Winnipeg Cycle and Motor Company, and Excelsior and Triumph at the Consolidated Bicycle and Motor Company. “T. Eaton Co. at Portage and Donald – although one of Winnipeg’s largest department stores – also had a very large motorcycle section right into the 1940s,” Metcalfe adds. There were at least eight other purveyors of motor-cycles in the city at the time.

The founding members were going to initially call the fledgling group the Winnipeg Motorcycle Club. However, in an effort to make the club inclusive across the province, they instead settled on the Manitoba Motorcycle Club. “Most of the club members were Winnipeg-centric, though,” Metcalfe says. “It would take two days to ride just 70 miles back then, and that limited the number of farther-flung members.” Two months after founding the club the MMC held its first official motorcycle run on April 21. The rest of the year saw members devoting their weekends to family rides, participating in parades and competing in racing events. 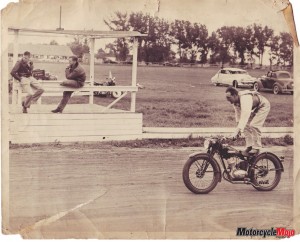 Founding MMC member “Wild” Joseph (Joe) Baribeau was a keen competitor. Baribeau wasn’t born in Winnipeg, though; rather, he hailed from Kenora, Ont., and from the age of 14 began dabbling in all things powered by internal combustion engines. In 1910, the now 21-year-old moved west to Winnipeg and raced motorcycles – particularly V-twin Indians. Kirkfield was a five-mile dirt track at St. Charles, a community on Winnipeg’s west side. On the Kirkfield track that year, Baribeau won a race, and one year later, according to the Canadian Motorcycle Hall of Fame, in September 1911, he set a lap record at Kirkfield when he clocked a mile at 56 seconds. And not a month after that, on October 16, Baribeau set a world record as the first rider to average 60 mph covering 100 miles.
Indian – produced by the Hendee Manufacturing Company – supported Baribeau, and he took a job with them late in 1911. He was moved to Toronto, where the company had set up a new assembly plant on Mercer Street. Baribeau continued to compete aboard Indian motorcycles and was sent back to Winnipeg in 1914 to defend his world record at the five-mile Kirkfield track.

A Holiday for the Races

Racers and manufacturers from across North America attended and competed at this event at Kirkfield, and it was the MMC that hosted the meet. Seeing the importance of the race, Winnipeg city council declared Monday, the second day of the competition, a public holiday, says Metcalfe.
Baribeau retired from competition in 1914 after falling in a race held in Toledo, Ohio. After he married, Baribeau returned to Winnipeg and eventually set up and ran an auto repair shop.
“Joe Baribeau was an important racer, and he helped put the Manitoba Motorcycle Club and Winnipeg on the map,” Metcalfe notes.

In a different kind of competition designed to prove the mettle of their machines, MMC members held a 50-mile reliability run in September 1911. The machines lined up and the event got started just outside the Winnipeg Free Press newspaper building. According to Metcalfe, several manufacturers, eager to showcase the superiority of their particular products, sponsored the event.

Not Just for the Guys

The MMC annually promoted its reliability run, and in 1914, the gold medal winner was Sadie Grimm. She rode her motorcycle 60 miles to Winnipeg Beach, and after four hours in the saddle, was the first person to reach the lobby of the Empress Hotel. Grimm reportedly rode the first 25 miles on gravel, then followed the Canadian Pacific Railway line, pounding along the ties and occasionally dealing with bogs and potholes. “We re-enacted that event in 2014,” Metcalfe says of Sadie’s tackling of what would have been, back in 1914, an arduous and strenuous undertaking. “We traced Sadie’s path, and there were more than 30 women riders helping us celebrate 100 years of women motor-cyclists in Manitoba.”
Many Manitoba-based motorcycle enthusiasts went to war in 1914, and those who returned were eager to pick up where they’d left off in terms of competing.

“In the late teens and in the 1920s, the Manitoba Motorcycle Club became something of a gentlemen’s sporting club,” Metcalfe says. “Members were always dressed to the nines and wore their sweaters and ties.” By the late 1920s, Winnipeg had become a general manufacturing centre and other cities, such as Vancouver, began to develop more quickly. When the Depression arrived on the prairies, Winnipeg was particularly hard hit. “But that didn’t really hurt the motorcycle scene,” Metcalfe explains. “Brand-new Knuckleheads were sold here in Winnipeg, so someone was working to make buying a new motorcycle a priority.”

When the Second World War dawned, the MMC and another Winnipeg group, the Roughriders Motorcycle Club, got together and petitioned the Canadian Army to allow them to form a special shock troop unit. According to a July 19, 1940, Winnipeg Tribune newspaper article, the two groups were “capable of forming a complete motorcycle shock troop body, with its 100 machines, 150 trained riders, mobile repair units and specialized repair crews and mechanics. It has its own instructors and could choose its own officers and [NCOs].” Instead of this unit becoming a reality, however, many members of the MMC, such as Irv Loewen, went off to fly with the RCAF. Some of the remaining MMC members, including Commanding Officer Albert E. Bennett, were called upon to help train military dispatch riders. Throughout the decades, the MMC had a hand in just about every competitive motorcycle event, from flat-track racing, hill climbing and ice racing to motocross and TT racing. The group also organized motorcycle drill teams and performed thrill shows with jumps and flaming board wall crashes.

Tim Moulson of Winnipeg can recollect some of these events. Although he was just six or seven at the time, his parents, Fred and Dot, were actively involved in the MMC. His mom and dad dressed him up as a motorcyclist, with a leather jacket and hat, and during the late 1940s and early 1950s, Moulson was a “mascot” for the MMC. “Dad loved his BSA motorcycles, and we didn’t have a car when I was growing up,” Moulson says. “He competed in flat-track and TT racing events, and also did many of the stunts. I know he got into bikes when he was younger and joined the MMC sometime in the 1930s. After he came back from the Second World War, he was a hillclimb champion and also won many of the other club events.” 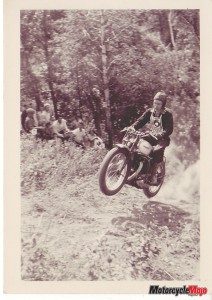 In 1955, Fred loaded up Dot, Tim, his older brother and their dog Sparky in a homemade sidecar attached to a BSA Golden Flash and set off from Winnipeg to explore the U.S.A. and the original Route 66. They travelled to Flagstaff, Arizona, and then up to Victoria, B.C., where the family lived for some time. “I’ve got nothing but fond memories of that trip, and all of the MMC’s motorcycling activities,” Moulson says. According to Metcalfe, the MMC had a long tradition of providing charity support and public service, and by the 1970s and early 1980s, it began operating toy-run events to help children in need. In the 1990s, the MMC maintained social riding events and started a safety awareness run to help kick off Motorcycle Safety Month (May) in Manitoba.

As the MMC neared its 100th anniversary in 2011, the clubhouse was unfortunately destroyed by fire. “We were only a short time away from moving the clubhouse to the Harley-Davidson dealership and making it something of a museum,” Metcalfe says. “The old clubhouse was being used for weekly meetings, and even though it dated to just after the Second World War, there was a great deal of memorabilia dating back to 1911. We lost a lot in that fire, but we’ve got some remnants that can be restored, such as the Dunlop Trophy that was awarded annually for the Reliability Run.” To ensure the MMC would continue in good health, the group amalgamated with the Antique Motorcycle Club of Manitoba in late 2010, and a new crest designed. In 2014, and in recognition of the group’s continued commitment to motorcycling, the MMC was inducted into the Canadian Motorcycle Hall of Fame. The focus of the MMC continues to be road riding, but its mission to promote the sport of motorcycling has never wavered.