Triumph’s Bonnevilles are now thoroughly modern motorcycles, but have they still got it?

Since the rebirth of the Bonneville in 2000, this year marks the first complete revision of the iconic motorcycle. Unlike previous variations of the bike, like the basic Bonnie, the Thruxton and the T100, which were basically the same bikes with different suspensions and trim pieces, these all-new Bonnevilles are distinctly different machines.

We’ve already ridden the Street Twin, the basic model with few frills, a new 900 cc liquid-cooled parallel-twin with five speeds, and lots of appeal. But now we’re in Lisbon, Portugal, to ride the new, classically styled T120 and the sportier Thruxton R. These two Brit bikes use a 1,200 cc liquid-cooled twin and six-speed gearbox. 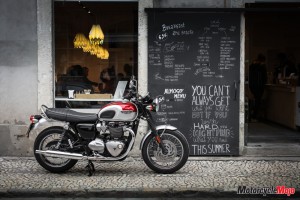 The T120 is the classically styled Bonneville. The more sinister-looking T120 Black is, as the name indicates, blacked out pretty much everywhere and has a tan-coloured seat (it’s my preferred T120 model), while the T120 is adorned with chrome trim. Both T120s come standard with traction control, ABS, Rain and Road ride modes, a lighter-effort mechanically assisted clutch, heated grips, a USB charging port and a centre stand.

Suspension components are basic, with only preload adjustability available in the rear. The bike rolls on an 18-inch front and 17-inch rear wheel. Nissin provides the braking components, which include a pair of 310 mm discs and two-piston calipers up front and a 255 mm disc with a two-piston caliper in the rear. Wet weight has not yet been published, but the number without fluids is 224 kg. Pricing for the T120 starts at $12,900.

Before embarking on the ride, I give the bike a good visual once-over, and I’m impressed with what I see. I’d read a comment somewhere online from a skeptic who moaned about the price increase of these new Bonnies, which he implied was even more unjustified because they are built in India.
Well, any qualms about quality control are completely unfounded, because the fit, finish and attention to detail are beyond reproach. Aside from the faithful reproduction of the classic Bonneville silhouette, it’s the bike’s fine touches that grab my attention. Although not readily obvious, a closer look reveals little details like high-quality fasteners throughout, throttle bodies that mimic old Amal carburetors, unique heated grips with an incorporated switch, and even rubber cable ties that include the word “Triumph” in relief.

Hopping onto the bike reveals a traditionally upright riding position. The flat seat feels a bit firm, though I didn’t spend enough time in the saddle to assess long-term comfort. Clutch effort is beginner-bike light, and the gearbox is so easy to shift, I’m sure you could ride the bike barefoot all day and remain blister-free, though I wouldn’t recommend it.

Rolling away, the first thing I notice is how smooth the new engine is. Power pulses are barely perceptible, to the point where some purists might find the bike too subdued. But subdued it is not, because there’s plenty of pulling power if you roll on the throttle, especially if the engine is spinning at the peak of its torque output, around 3,000 rpm. The engine produces a not-too-shabby 80 hp, up considerably from the previous 865 cc twin’s 67 hp. Torque is also up, now peaking at 77.4 ft-lb, a 27.4 ft-lb increase from the former bike.

All new Triumph liquid-cooled twins now sport a 270-degree crankshaft, so the flat-sounding 360-degree design is gone. Despite the larger displacement and increased performance, the new engine is claimed to be 13 percent more fuel efficient than before, with factory specs showing fuel consumption at 4.5 L/100 km.

The T120 is by no means a rocket ship, but it does move forward in a forceful manner, with a broad, flat powerband that somewhat belies the speedometer’s readings. Throttle response is direct without being abrupt. In Rain mode, the throttle feels sluggish, and I’m not sure the bike even needs a rain mode, given the power delivery is so fluid. And if you doubt your capability in the rain, traction control is there to save the day anyhow.

Handling is on the relaxed side, with modest steering effort required through tight turning transitions, and I feel a slight tendency for the bike to stand up in corners, requiring a bit of effort at the handlebar to maintain a lean. The trade-off is unwavering stability, regardless of speed or road conditions.
Being that this is more retro-standard than sport bike, the suspension is tuned for comfort, and comfortable it is. If you decide to ride at a peg-scraping pace (and they do touch down early), the bike remains composed enough to handle it, but push the bike further and the softly damped suspension will wallow around a bit. Overall, I’d rather have this setup for everyday use than firmer, sportier settings.

And besides, this isn’t a bike designed to carve canyons like a scalpel; it’s designed for managing the demands of everyday riding in comfort and with a fair measure of style. If you want to chase your sport-riding buddies, then you’re better off looking at the Thruxton. 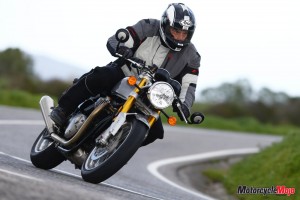 After a morning romp on the T120, we trade saddles for the Thruxton R (the standard Thruxton was not available for testing). While the previous Thruxton and T100 differed mostly stylistically, these new bikes are entirely different machines. Unless you ride the T120 and Thruxton back to back, you really won’t grasp just how much effort Triumph has put in to distinguish the two.

Despite the Thruxton R’s café racer profile, the riding position is less aggressive than expected. The clip-ons actually rise well above the top triple clamp, so the riding position is much more relaxed than that of the Ducati Sport Classics of a decade ago, which the Thruxton resembles. It’s also more relaxed than the first-generation Thruxton, which boasted unusually aggressive ergonomics. There’s plenty of legroom, too. Comfort is hampered by the firm seat, which has me squirming after only about 30 minutes.

Componentry, engines, suspensions and wheels differ greatly between the T120 and Thruxton, and a glance at the spec sheet reveals different chassis specs as well, with the latter’s clearly on the sportbike side of the spectrum.

The Thruxton and Thruxton R roll on 17-inch wheels, but that’s about where the chassis components overlap between the two machines. The basic Thruxton uses a 41 mm non-adjustable conventional fork, and shocks with preload adjustment only. The brakes are the same as those on the T120, and tires are Pirelli Angel GTs. The Thruxton R has a fully adjustable 43 mm inverted big-piston fork and Öhlins fully adjustable piggyback shocks, and it rolls on sticky Pirelli Diablo Rosso Corsa rubber. Brembo provides the front master cylinder, 310 mm floating front discs and radial four-piston monobloc calipers; the rear brake is unchanged from the standard Thruxton’s.

Within two turns, it’s obvious the Thruxton is lighter, sharper and much firmer than the T120. The engine is much more responsive, too, snapping to life with a modest throttle blip.

It feels more visceral and alert, and even transfers more vibration to the rider, though the bike still remains remarkably smooth. Both Thruxtons use a breathed-on version of the 1,200 cc twin, which Triumph calls the “Thruxton spec” engine. It has a higher 11:1 compression ratio – compared with 10:1 for the T120 – and a lighter crankshaft. It produces 97 hp and 82 ft-lb of torque. As with the T120, the Thruxton-spec engine is 11 percent more fuel efficient than previous models. Published numbers place it at 4.6 L/100 km.

The R’s suspension is set Euro-bike firm, which really helps on smooth, winding roads at speed, but doesn’t do much for rider comfort when the roads get rough. This is exacerbated by the hard seat, which is only available in solo form as standard – a pillion seat and passenger footrests are optional.

The R’s sporty nature actually surprises me after just a brief time on the road, as I still have the previous T120 stored in my memory bank. Despite its classic lines, the Thruxton R handles more like a modern sport bike – not R6 nimble, of course, but responsive, precise and a load of fun. It even feels nervous at times, though not disconcertingly so – just enough to keep me on my toes. Snapping the throttle in second gear lifts the front wheel instantly, making this the liveliest Bonneville to ever leave the Hinckley factory.

Music to the Ears

Oh, and the R’s reverse-megaphone silencers emit a very pleasant burble. Although I usually abstain from swapping exhaust systems on any of my bikes, I’d certainly like to hear what the Thruxton sounds like uncorked. Both Thruxton models include a USB charging port, a lighter-effort clutch, standard traction control, as well as Rain, Road and Sport ride modes. Dry weight is 206 kg for the Thruxton and 203 kg for the R. Pricing is $13,200 for the standard version and $15,500 for the R. Available for personalizing your bike are three optional “Inspirational Kits”: the Track Racer, Café Racer and Performance Race Kit. Fit and finish are as good as on the T120, and the Thruxton R garners much more attention from bystanders than did the more subdued T120.

You can call me old fashioned – or just old – but I find the Thruxton R a bit too compromising to be my first choice. I think it would make a great second or third bike in my garage, if I could afford such frivolities. If I were to have just one Bonneville in my household, it would be the T120. That said, here’s a bit you don’t want to hear, especially if you’re keen on signing up for a new Thruxton: According to Triumph, they’re already sold out.