Story and Photos by Glenn Roberts

It’s true that most people with big adventure bikes never take them off-road. While these types of bike are comfortable for the long haul on pavement, those riders are missing a huge opportunity for fun and excitement. How many times have you passed a gravel road or a logging road and thought it would be fun to see what’s at the other end, but didn’t pursue the exploration because you lacked the knowledge and confidence of riding in gravel or loose terrain?
Anyone who rides off-road knows how enjoyable it is to ride off the beaten path. Coming from decades of street riding, I enjoy every chance I get to tackle forest trails. Riding in the dirt not only improves your street-riding skills by teaching you what can happen should you lose traction on the pavement, but, more importantly, also by teaching you how to recover from a slide on loose gravel, sand or rain-soaked pavement.
While it’s fun to challenge traction in the right environment, these big adventure bikes aren’t lightweights, ranging in mass from around 200 to 235 kg. That in itself can be intimidating. Luckily, there is an off-road course to help. 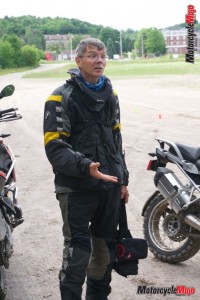 Clinton Smout, a name you may recognize as a regular columnist in Motorcycle Mojo, has a long resumé dating back to 1983, when he began training motorcyclists both on and off-road. He developed his own off-road riding school in 1997, and to date has taught more than 63,000 students of all ages. That number jumps to over 80,000 if the Yamaha Riding Academy at winter motorcycle shows is taken into account. While he and his staff at S.M.A.R.T. Riding Adventures train riders ages six and up the various intricacies of two-wheel manoeuvres, it’s his BMW Performance Riding Centre that takes care of the more advanced techniques on big adventure bikes like BMW’s full GS line.

Smout, who was a BMW Motorrad marshal instructor for the 2014 World GS Trophy competition, is the only BMW Motorrad-certified GS instructor in Ontario, so far, that is. Two of his staff, Amanda Kennedy and John Chemelo – both exceptional riders and instructors in their own right – were in Germany (as we went to press) to attend the tough BMW Motorrad course to also become certified GS instructors.
Smout’s BMW Performance Riding Centre, located at Horseshoe Valley just north of Barrie, Ont., and less than an hour and half from Toronto’s Pearson Airport, has been in operation since 2011 as a one-day course, but the curriculum has become far too intense for a single day. I was fortunate to be able to take part I of the new-for-2016 two-day course from Smout, with Kennedy and Chemelo assisting. Part II will begin in 2017 and will also be a two-day course.
Over the past number of years, I have had some training and countless hours hacking around on forest trails, thanks to my daughter, Emily, and Smout’s school, but taking an advanced off-road course such as this offers a whole other level of training, and I was really looking forward to expanding my off-road knowledge and skills. 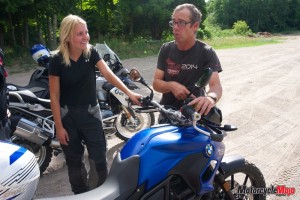 During the two-day course, I rode BMW’s venerable F800GS, a bike that served as a perfect mount for the duration. BMW motorcycles are supplied by the riding centre and include the F-series 650GS, 700GS, 800GS and the R1200GS, all equipped with sturdy crash bars, skid plates and knobby tires. Or, if you prefer, you can ride your own adventure bike on the course, regardless of make. And if you don’t have your own proper protective off-road riding gear, everything you need is also provided.

Also on the course was Wade Dunford, Shawn Taylor, Reza Mashhour (who flew in from Vancouver specifically for the course), David Bowden and Vic Tavaszi (who used to ride in his younger days, but has only been riding for three months in this stage of his life). Most of the students stayed on site at Horseshoe Resort – convenient for those who need to travel to take the course.

The BMW performance course began in a dirt parking lot with basic instruction and slow-speed manoeuvres that involved weaving through cones and tight figure eights, a little loose sand, standing on the pegs one foot at a time, and even shuffling around on the bike to stand with your left foot on the right peg, and vice versa, to fully understand balance and to offset your weight while keeping the bike’s desired trajectory. Simulated ruts and riding over small logs rounded out the first morning.
In addition to understanding that the clutch won’t fry from feathering it so much, we learned how important applying your weight on a foot peg is in order to steer. It’s never a good idea to use abrupt inputs on a motorcycle, but that goes tenfold when in mud and deep sand, and turning the handlebars to change direction will likely result in going down. To efficiently turn in those conditions, you must weight the foot peg to initiate the turn, and it didn’t take long to learn that.

This type of manoeuvre, of course, involves standing on the pegs. If you aren’t used to standing on the foot pegs, it feels very awkward at first, but once used to it, you’ll find it is actually easier for controlling the bike in all conditions off-road. 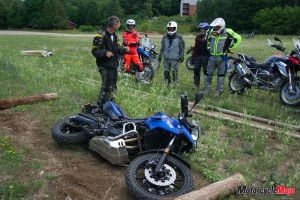 Two very important strategies emerged from the first day’s ride: steering by weighting the bike’s foot pegs and feathering the clutch to control speed. Smout demonstrated how a bike will turn in a considerably shorter radius when leaned over, so leaning the bike at slow speeds requires weighting the outside pegs to prevent the bike from falling over, in essence, creating a V with your bike and your body. The same exercise emphasized the need to feather the clutch to control slow-speed manoeuvres.

After lunch, we put everything we had learned so far to use while out on the trails. Considering the F800GS tips the scales at 214 kg, depending on how much fuel is in the tank, it handled the bush trails as easily as it takes on pavement. The power delivery to the rear wheel is as equally matched for throttle control as the steering and frame geometry is matched to the various terrain that included loose surface ATV trails, some mud and a section designed to practise very tight, slow-speed corners.
The initial training in the morning primed us to ride the trails, but the…