What was once old is new again, and in the case of Suzuki’s new GSX-S1000 family, borrowing from the past means the return of an old friend with some serious credentials.

For fans of motorcycle racing during the late 1990s and early to mid-2000s, it was not uncommon to refer to one single bike as “The King” when discussing the weekends race results, and for good reason: Suzuki’s GSX-Rs took home 10 of 11 consecutive AMA superbike championships during that span. Those premier-class offerings raced on Sunday and were sold on Monday in showrooms all across North America. And the sales numbers – as they often do – reflected what was happening on the podium. 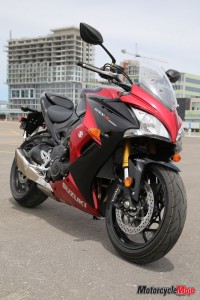 Nearing the end of its unprecedented reign, the GSX-R1000 was known for its power delivery, in particular, its torque. While most bike manufacturers sacrificed mid-range to achieve stratospheric top-end output, the Suzuki was managing to do both. That particular motor from the 2005 GSX-R1000 is still coveted for its long-stroke design, which trades peak revs for more torque. It’s also considered by many fans to be the best all-around performer Suzuki ever made. As time marched on, this mill was replaced by newer technology, but not forgotten by enthusiasts – nor by the engineers back at Suzuki.
Unfortunately for the OEMs and their increasingly complex superbikes, time didn’t march very far before sales of sport bikes, and all other motorcycles in North America, took the proverbial long walk off a short pier. In search of new ways to attract aging customers to large-displacement sport bikes, the OEMs began offering more street-biased, high-performance bikes. Enter the sport standard: a sport bike with a more ergonomically friendly riding position. This category has been around for many years, but its participants were often cobbled together with obsolete components that were best left on the shelf. Recently, more hard-edged examples that are literally nothing more than a superbike with a half fairing and high handlebar have elevated the class to the very pinnacle of performance and pricing. Within the hierarchy, there’s a small group of bikes that occupies a happy medium between cost and performance, and this is where Suzuki’s new GSX-S1000F hopes to exist. 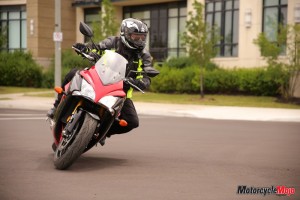 The fully faired GSX-S1000F ABS is the more formally dressed twin to the naked GSX-S1000 ABS. The only significant differences are a fairing and windscreen, which do provide some protection from the wind – that is, until you hit 100 km/h, at which point the airflow over the low-mounted screen starts to buffet the rider’s chest and head. Personally, I’d forgo the additional 5 kg added by the fairing and opt for the naked version, but the decision is mostly one of aesthetics, so if you’re into that signature Suzuki bird-of-prey look, then this is the one for you.
Our test unit came in black and red, but you can also get it in a matte grey on black, or traditional Suzuki blue and white. Pictures don’t do this bike justice, and it needs to be seen in person to appreciate how compact and muscular it is. Throw a leg over the
810 mm saddle and you’ll be pleasantly surprised by how narrow the newly designed rigid aluminum frame is, especially for something cradling an inline-four. It’s actually lighter than the frame on the current-generation GSX-R1000, as it doesn’t have to wrestle with quite as many horses. The aluminum-alloy rear swingarm, on the other hand, is borrowed directly from the current superbike.
There are in fact many components that have been pilfered from the parts shelf to create this new bike, but they are by no means obsolete. For starters, there’s the familiar Brembo monoblock calipers and 310 mm front discs, which are eminently capable, probably more so than most riders will ever need. The bite starts out soft and builds quickly, with good feel for what the front tire is doing. The single-piston Nissin caliper and 220 mm disc on the back worked perfectly for low-speed manoeuvring and for scrubbing that little bit of speed to tighten up a turn.

Another welcome sight is the 43 mm KYB fork with full adjustability that can be dialled in to suit just about anyone and any situation. Not quite as welcome is a rear Showa shock that felt out of place compared to the rest of the package and was very soft as it arrived from the factory. It needed to be stiffened up significantly to match the performance of the front suspension, especially for aggressive riders or those approaching 200 pounds.

At 214 kg fully fuelled, the GSX-S1000F is a lightweight in its class, and with the motocross-style Fatbar to use for leverage, it handles like it. Turn-in is almost too quick at low speed, with the bars tending to flop into the turn, but once up to speed, changes in direction are virtually telepathic; in fact, with all that leverage, it’s easy to make too many corrections mid-corner. Your best bet is to pick a line and hold those bars as if they’re made of glass.
While the handlebar places you in a more comfortable configuration than sportbike clip-ons would, the positioning of the pegs has not migrated quite as far from their sporting origins. The pegs are one of only a couple of items keeping this from being a full-on sport-tourer. On the plus side, there’s lots of room to lean before anything touches down. One of the bike’s most enjoyable traits is how narrow it feels when transitioning your weight from one side to the other and the ease with which it’s accomplished. My short legs often make inline-fours feel as though I’m straddling a wine barrel, unable to lean off the bike or move around freely. Not the case here. 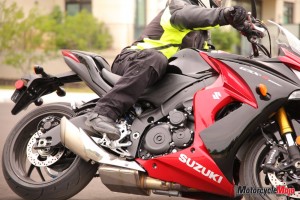 That brings us to the motor. Borrowed from the 2005-2008 GSX-R1000, the long-stroke 999 cc inline-four produces 145 hp at 10,000 rpm and 78.2 ft-lb of torque at 9,500 rpm. That’s down a little compared with the original specs for this engine, due primarily to different valves, camshafts and tuning focused on a more widespread power band. The pistons are lighter, and the cylinders now wear a Suzuki Composite Electrochemical Material (SCEM) coating for reduced friction. Bore and stroke are untouched at 73.4 x 59 mm, preserving the power-rich nature of the beast. But really, all the numbers and marketing initialisms in the world mean absolutely nothing without getting to turn the throttle yourself. When I said it has personality, I’m not referring to the light-switch power delivery and top-end rush of acceleration we associate with high-revving four-cylinders – no, there’s more substance here. Don’t get me wrong, when the needle passes 9,000, there’s still plenty of personality, fabulous sounds and mind-bending acceleration; it’s just not easily accessible without breaking a lot of laws. And that’s okay, because the mid-range is where you’ll make fast friends with the GSX-S1000F, and where you’ll want to spend all your time getting acquainted with this charismatic powerplant.

Not only did this bike borrow a race-proven engine, it borrowed the sweet-shifting, close-ratio six-speed transmission as well, and to make it even more interesting, they added two teeth to the rear sprocket, reducing the overall gearing and boosting an already mighty mid-range punch. The side effect is increased revs at highway cruising speeds, where you’ll find a buzzing that travels through the bike at around 6,000 rpm. However, that vibration signifies the engine is in the meat of the power and you’re a small flick of the wrist away from a totally different kind of buzz.

Despite having lost a few horsepower from its original application, this combination accelerates on the road faster than even the current GSX-R1000, and it does so while emitting a fabulous-for-stock exhaust note. The airbox induction noise is equally aggressive, drowning out everything else with a howl when the throttle is whacked open – a feat that is easier than ever on a Suzuki sport bike thanks to selectable traction control, accessed by a rocker switch on the left handlebar. This is only the second bike from Suzuki to employ electronic traction control (the first being the 2014 DL1000), and in this form it uses three settings as well as an option to turn it off. Setting three is best suited for wet or slippery surfaces, while setting two is a good all-around option if you’re just getting used to the capabilities of the GSX-S; setting one is a nice safety net for aggressive riding. Turning it completely off didn’t feel any different from leaving it in its first setting, and exploring that fine line is not something I had occasion to do with a borrowed bike on public roads. The system doesn’t default to any particular setting; instead, it reverts to wherever it was before the bike was turned off, so make sure you’re in the correct setting before pulling away.

And that brings us to a surprising little feature that Suzuki snuck in this year. When letting the clutch out at a stop, the engine rpm automatically increases to assist with pulling away. I barely noticed it at first, but after a few minutes in traffic, it became very obvious and I was soon able to pull away from a complete stop without applying the throttle. At least it made for a little fun in morning gridlock.

Electronics are a big part of the allure of bikes like this, and it has to be said that this Suzuki is not entirely cutting edge, at least not in terms of rider-selectable options. The new digital display is well laid out, with all the pertinent information present, like a speedometer, gear indicator, trip meter and traction-control settings; there’s even a programmable tachometer. But there are no menus to negotiate or bar-mounted scroll wheels to manipulate, no electronic suspension, power modes or anti-wheelie settings to mull over. And we might as well enjoy it while we can, because this is probably going to be one of the last superbikes produced with so little electronic intervention.

Even without all the latest gadgets, this is without doubt a superbike. The GSX-S1000F ABS is capable of turning in blistering lap times and blowing even a race-prepped 600 cc sport bike into the weeds on any straightaway. Admittedly, it’s not as sharp or focused as a pure sport bike, but that’s what makes it more enjoyable – all the performance benefits in a comfortable and practical package. Just throw some soft luggage on the back, source a taller windshield, relocate the foot pegs and maybe add those two teeth back onto the rear sprocket, and you’ve got a bargain sport-tourer/track day weapon.

At $12,999, the GSX-S1000F ABS is the least expensive in its category, and that’s by design. They went to the parts shelf on this one and chose to use components that allowed for a specific price point. We all know Suzuki is more than capable of building a bike with the latest electronics suite, a 200 hp engine, and suspension and brakes sourced from its AMA championship-leading GSX-R1000. The problem is, that bike would cost thousands of dollars more. From a business perspective, this choice makes sense. From an enthusiast’s perspective, it’s not the latest and greatest, and it’s showing up to the party a couple of years late, but this package is more than just the sum of its parts. The people responsible for the GSX-S1000F concept were obviously GSX-R fans or were at least listening to them. Now that Suzuki has a proper offering in the sport-standard segment, it just needs to get us aging sportbike enthusiasts out for a test ride and let the combination of practicality and performance sell itself.