Any day on a motorcycle is good, even when you’re outside your comfort zone

The summer of 2015 was truly a phenomenal one, as the Pan Am and Parapan Am Games came to Toronto. Maybe, like many people, I didn’t really pay too much attention when the Games were awarded to Toronto in 2009. And maybe, like many people, I also was not aware that the Pan American Games are the world’s third-largest international multi-sport event held every four years, surpassed in size only by the Olympic Summer Games and the Asian Games. It was also pretty impressive to find out that close to 7,000 athletes from across Latin America, South America, the Caribbean and North America were coming together to compete in 36 Pan Am and 15 Parapan Am sports. Interesting, but what does this have to do with motorcycling? 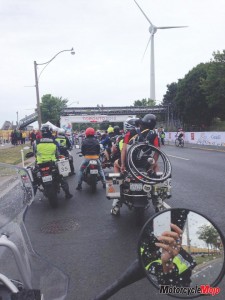 Along with 14 other motorcyclists, I had the distinct honour of participating in both the Pan Am and Parapan Am Games in the most glorious way – on the actual course. It came in the form of providing motorcycle support for the cycling and marathon events. Now, I thought myself fairly primed for this event, having done support for bicycle races, marathons and charity events in the past, but nothing could have prepared me for the intense level of competition among these world-class athletes. It was late in 2014 that I was contacted to see if I would be interested in providing support motorcycles. I immediately said, “Absolutely,” with no real thought as to what to expect. I got in touch with a number of avid motorcyclists and instructors I’ve had the pleasure of working with in the past and elicited the same initial response. Honestly, it then went to the back of my mind over the winter hibernation that all motorcyclists go through, but by mid-March 2015, the confirmation was given from Richard Price, manager of sport for the Pan Am Games, that all was a go. Motorcycle support was required for a number of “road” events, both for the Pan Am Games in July and for the Parapan Am Games in August.

A Variety of Tasks 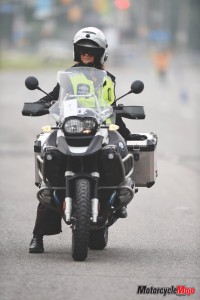 It didn’t start getting real until July. Our first step was to get registered into the volunteer system, which included background checks, to receive our accreditation. Only people with accreditation would be able to get into the venue and then onto the field of play, which was the actual closed course. It would also allow us to be fed during the working hours of the events we were scheduled for. The organizers had already made note of the list of riders I had provided so that they could be tracked in the system and assigned roles for the various sports and complete online training. The team of riders had to also obtain their licences through Cycling Canada so that we all qualified for riding in the “peloton” (a term used to refer to the main group or pack of cyclists in general) for the road cycling competition. Whew! Eventually, we received a breakdown of events for each rider and their roles. For the Pan Am Games, I was tasked with carrying an official for the triathlon competition, media for the marathon competition and a commissaire for the cycling road-race competition. For the Parapan Am Games, I was assigned to lead the race. The action started at the beginning of July, when we had to pick up our uniforms and accreditations, and never really stopped until the closing days of the Parapan in mid-August. Our venue was down by the waterfront on Lake Shore Boulevard, from Ontario Place and into High Park for the triathlon, marathon, and cycling. The time trials venue was in Milton, near the new velodrome. 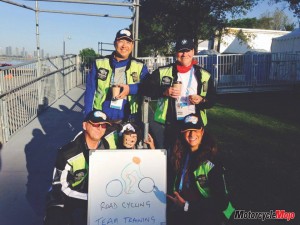 My first day on the job was the triathlon route familiarization on July 8, with the actual events taking place on the 11th and 12th. I was carrying Jon, an official for both male and female races, and I witnessed firsthand the heartbreaking side of competition when bad luck forced one of our Canadian athletes out of the race early: another athlete’s bike struck a pylon, which then struck the Canadian’s bike and damaged a tire. To see the crushing disappointment immediately in front of me when we stopped to assist, without the filter of a television screen, was an experience I won’t soon forget. It also reinforced that as riders, we have to be mindful when carrying passengers to educate them on how we wish them to act. I had advised Jon to wait until I was stopped and had the motorcycle secured before he dismounted. In the heat of the action, telling me to pull over so that he could get to the Canadian, he almost jumped off the bike before I had even put my foot down. There may have been two Canadians down at that point.

During the marathon competition, I hosted a photojournalist from Chile named Hector. He was fantastic to work with and again provided another level to carrying a passenger, as his camera and lens was almost as big as he was. We quickly developed a routine throughout the two days we spent together, and I have some fantastic photos as evidence.

And then (cue music) – there was the road cycling event. Nothing, absolutely nothing, prepared me for being part of a caravan of at least 35 vehicles travelling behind a large pack of cyclists (the peloton) topping ridiculous speeds along our city streets. If you are at all familiar with Toronto’s High Park, let’s talk about Ellis Park Road and, in particular, Olympus Avenue. They turned this into an upward hairpin on the course: a narrow residential street lined on both sides by the crowds who came out to support the athletes.

Now, on its own, and me piloting my own motorcycle, would have been no problem. But I was carrying Ann, a commissaire, and we were to stick with her official’s car to pass notes back and forth. I kid you not. I had to negotiate this upward hairpin, going at approximately less than 3 km/h while attempting to pick my line, with bicycles, cars, motorcycles, other support vehicles and people with cameras. It was 10 times around the course for the men and six times for the women. This section was easily the most challenging and heart-pumping experience of the Games on a motorcycle.

A completely inspirational day came on August 8, with the para-cycling road race. Athletes with physical impairments competed on handcycles, tricycles or bicycles. Those with visual impairments competed on tandems with a sighted “pilot.” For the road race, I was the lead for the handcyclists. With their low profile, these athletes really sneak up on you, and I not only had to keep my eye out low and to the sides, but on my speed as well. I was privileged to be able to witness firsthand Canada’s Mark Ledo receive gold in his classification. Canada also took the bronze. Not to minimize the Pan Am athletes, but what these athletes could do with limited arm function, complete loss of trunk and leg function, amputations and other activity limitations was truly inspiring. They most definitely defined the phrase “anything is possible.”

To be quite truthful, I may have been part of the masses who considered the Pan Am Games the instigator of all nightmare traffic conditions for the better part of summer 2015. The traffic congestion and costs provided plenty for everyone to complain about.

Certainly, I wouldn’t have gone down to watch any of the events live. But instead, I got to ride my bike down the HOV lanes; ride closed city streets along Toronto’s waterfront; meet athletes, officials and volunteers; work with amazing people; and be part of the Games – it was absolutely spectacular. There were really early mornings and late evenings, but I would not have changed the experience for the world.

Yep. Undoubtedly, the best seat in the house.