Moto Guzzi’s beginnings were tied to aviation, so it seems fitting that the Italian company named its first entry into the bagger category after the American heavy bomber

The bagger, which is a stripped and slammed version of a full dresser, is a purely American phenomenon, and there are two ways to look at it: It’s either the devolution of the dresser,
sacrificing touring practicality for a streamlined silhouette, or it’s the evolution of the cruiser, adding saddlebags and a fairing to a low-slung, foot-forward machine. The three main American bike makers – Harley-Davidson, Indian and Victory – all produce different variations of these streamlined touring cruisers, and in fact, the segment is important enough that Honda stripped the Gold Wing to produce the F6B. Even BMW has teamed up with American custom bike guru Roland Sands to build an experimental bagger based on the K1600GT, called the Concept 101. The traditional bagger, however, is American made, so one made in Germany might be a bit of a stretch. Perhaps equally unlikely is a bagger made in Italy – yet here it is: the 2017 Moto Guzzi MGX-21 Flying Fortress. 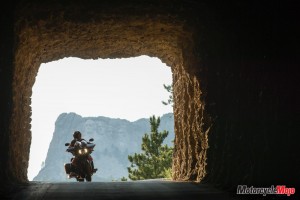 Blacked-Out in the Black Hills

Aimed squarely at the North American market, Moto Guzzi chose the mother of all biker rallies to launch the MGX-21: the 76th annual Sturgis Motorcycle Rally in South Dakota, where the Black Hills provided the ideal backdrop to test this blacked-out bagger. Although MGX-21 designer Miguel Galluzzi now heads Piaggio’s Advanced Design Center in California, he has created a few memorable machines along the way, including the 900 Super Sport and Monster for Ducati, when he was at Cagiva; as well as the Aprilia Dorsoduro, Shiver and RSV4, among others, during his current tenure at Piaggio. 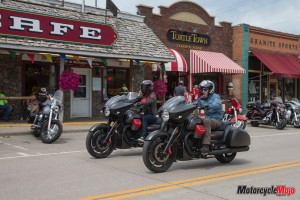 So, the guy has a keen eye for style, and this is evident as soon as you see the MGX-21, because it strikes an imposing silhouette in the metal – or carbon fibre might be a better term, since the big Guzzi is adorned in the lightweight material almost from axle to axle, including the front fender, fuel tank panels, saddlebag lids and other trim pieces. Galluzzi took a rather sinister approach to the bagger, avoiding chrome entirely and instead using matte black and the composite material throughout. The only highlighted items are the cylinder heads and front calipers, which, instead of being plated in the gleaming reflective stuff, are bright red.

Stuffed in a Sideways V-twin 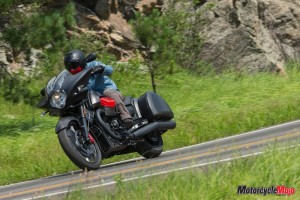 The angular batwing fairing contrasts the rounded lines on the rest of the bike, but the overall effect is quite stylish. Even hard-core Harley riders took notice of the MGX-21 while parked on Main Street, Sturgis, and most of them had nice things to say – at least those who were actually aware of brands other than Harley. Many passersby had never heard of Moto Guzzi, while others thought the company had stopped producing motorcycles decades ago, which is the reason the Italian bike maker came to Sturgis in the first place: to increase brand awareness. One guy even wondered how we’d managed to get the engine in sideways. Beneath the bodywork is a 90-degree, 1,380 cc eight-valve V-twin that produces 95 hp and 89.2 ft-lb of torque, and drives the rear wheel via a six-speed gearbox and shaft final drive. The single-plate clutch has a moderate pull at the lever but releases smoothly with a wide friction point. One thing I really enjoy about the engine is that it shakes side to side at idle, thanks to its rubber mounts; it’s very reminiscent of a V8 in a hot rod. The rubber mounting also quells vibration to an almost electric smoothness once you get rolling. 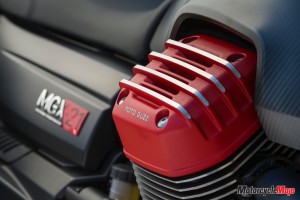 The bike’s seat height is low at 740 mm, but ergonomics are man-sized with lots of legroom to the foot pegs, which are comfortably mounted just a smidgen ahead of mid-position. The handlebars are a moderate forward reach, but they, too, are comfortable, especially since the fairing cuts wind to the torso, so you’re not always pulling forward at speed. The handlebars are non-adjustable cast-aluminum, likely designed that way to deter owners from swapping them out for ape hangers. As mentioned earlier, the Flying Fortress is big, and quite heavy at 341 kg wet (although lighter than the above-mentioned competitors). It takes a heroic effort to lift it off the side stand, and manoeuvring it around the parking lot is a good enough workout to save you money on a gym membership. In fact, at low speeds, it’s probably the heaviest-steering motorcycle I’ve ridden recently. The combination of raked-out steering geometry, a cast 21-inch front wheel (carbon fibre covers conceal the spokes), and a fork-mounted fairing with incorporated sound system and speakers really add heft to the front end, causing it to flop over when turning at low speeds – so much so that Guzzi engineers had to affix a small spring-loaded shock under the lower triple clamp to counter the heavy weight as the fork reaches its steering stops.

I was somewhat curious about this device, so with the help of another moto journalist, I propped up my test bike with the front wheel in the air just to see how it works. When the fork is centred, there’s no resistance, allowing free movement side to side. However, as the fork nears the steering stop on either side, it takes progressively more effort to swing it over before it hits the stop, my guesstimate is 5 kg at the handgrip. This unusual system is invisible once speed picks up, as it’s really designed to assist parking lot manoeuvres. 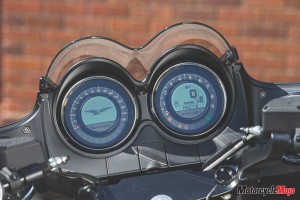 Having misread a map, another rider and I took a few less-travelled back roads south from Sturgis toward Custer State Park and, after about 30 km along a smooth, winding and curiously vacant road, discovered that the pavement ended. Ever the adventurers, we continued on the dirt roads, where the big baggers nonetheless rolled along unperturbed. The only hitch was that we weren’t briefed on the full operation of the bikes before leaving and couldn’t figure out how to turn off the three-level traction control. I managed by finding a sweet spot in the least intrusive level 1,
feeding just enough throttle to keep the rear tire on the edge of spinning. We later learned that to turn off the traction control, you must scroll down to level 1 using the thumb rocker switch on the left handlebar, then hold it down for a couple of seconds. Maybe it was better the traction control was still on, because we returned the bikes to our wide-eyed hosts covered only in dust instead of peppered in stone chips.

The engine is remarkably smooth and it has a wide-ish power band, but if you want to quickly get by slower traffic (of which there is plenty during the Sturgis rally), you have to drop at least two gears, the engine pulling hardest between about 5,000 rpm and its indicated 7,000 rpm redline. The Brembo supersport-spec radial front calipers provide very strong two-finger braking, though the rear feels a bit wooden. ABS is standard in case you tend to squeeze too hard on the lever.

On pavement the steering is neutral and relatively light, but the bike prefers long, flowing bends to tight turns. It flows through long, sweeping curves quite gracefully at speed, unless you hit a dip or bump mid-turn, which causes the bike to weave quite noticeably before settling down again. Despite its long, swept-back appearance, the MGX-21 has abundant cornering clearance, and it leans surprisingly far before foot peg-feeler sparks fly. I added 10 clicks of rear preload (the only suspension adjustment available), which further increased cornering clearance without inhibiting ride quality. It should be noted that the roads criss-crossing the Black Hills – even the dirt roads – are impeccably maintained, so it’s no surprise that I found the suspension quite compliant. Of course, no ride in Sturgis is complete without a slow cruise down Main Street, where the MGX-21 really turned heads, and where I discovered that it doesn’t bake you with excessive engine heat.

On the highway, the fairing protects you from the windblast to about shoulder level, and what wind you do feel above that is smooth and free of buffeting; a taller touring screen is available for added wind protection. The saddlebags are very easy to open and close with a single latch and key, but capacity is a scant 29 litres per side and they are shallow—my leather jacket alone was enough to fill one. The bike also has cruise control, but it lacks a resume function, so it has to be reset any time the brakes are applied. It also has a USB port that lets you connect a media device or smartphone to the sound system, but the port doesn’t charge the device, which is curious, given you can also connect via Bluetooth – so why the port? Another oversight is that the ignition switch doesn’t have an accessory position, which would enable you to listen to the sound system when parked without having to turn on the ignition. And finally, since I’m nitpicking, the turn signals are not self-cancelling.

Moto Guzzi won’t sell boatloads of the MGX-21 Flying Fortress, and the company doesn’t expect to do so. The bike is a unique take on the bagger, and like all baggers, it’s designed primarily to look good. And it does. It’s a premium motorcycle with excellent fit and finish, and it’s also fairly exclusive, which adds to the appeal for potential bagger buyers. However, it also demands a premium price at $23,990, which puts it within reach of the $25,299 Harley-Davidson Road Glide and right on par with the Victory Cross Country. And that alone might make it difficult to swing buyers away from the traditional made-in-USA baggers to one with an Italian flair.