Regardless of the theme, a motorcycle museum is great place to connect with your inner gearhead

Let’s face it. If you’re a motorcycle junkie like I am, you love examining the details of all two-wheel creations – particularly the old ones that fully expose all the intricate workings of linkages, levers and cables. But it isn’t always easy to find a wide selection of vintage motorcycles in one place.

Few and Far Between 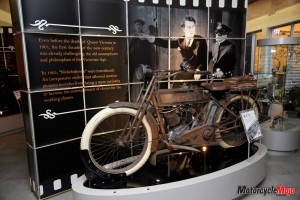 I could be wrong, but in my experience, there are less than a handful of mainstream museums in Canada dedicated to the motorcycle. Quickly coming to mind, there’s L’Épopée de la moto in Saint-Jean-Port-Joli on Highway 132 on the eastern side of the St. Lawrence River in Quebec; Dreamcycle Motorcycle Museum on the Trans-Canada Highway just east of Sorrento, B.C.; and the Deeley Motorcycle Exhibition located at Trev Deeley Motorcycles on Boundary Road in Vancouver, which incidentally is Canada’s oldest Harley dealership.
Sometimes you get lucky and happen upon a personal collection. I once found a small, privately owned motorcycle museum many years ago at a crossroad while riding in western Newfoundland, but I couldn’t tell you now where it was. Overall, it’s pretty slim pickings for a lover of all things in the world of two-wheel mechanicalness. Fortunately, I was able to visit the Deeley Exhibition while in the Vancouver area. It wasn’t my first time visiting the museum, and it certainly won’t be my last. As with any well-orchestrated museum, the theme changes as different machines are pulled from the vast 250-plus bike collection of more than 50 brands that span 120 years of motorcycle evolution. The first time I went was to see the End of Empire display; this visit’s subject was Cycles and Cinema.

A Star Is Born 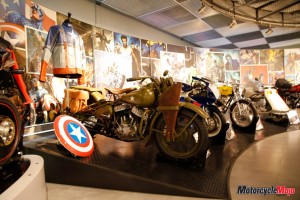 Obviously, there is a direct connection to some movies where the motorcycle plays a leading role, such as in Easy Rider, On Any Sunday, The Wild One and The World’s Fastest Indian, and those are easy to put plaque text to the accompanying machine, although the original movie bikes are not the actual ones on display; they are either recreations, as is the case with Captain America and the Billy Bike, or they are a similar year, make or model of the bike in the film, as is the case with hose from the World’s Fastest Indian and The Wild One.

But in many Hollywood movies, the motorcycle is not the star and generally takes a back seat to the storyline, lucky to have a cameo appearance. I can’t attest to the display’s accuracy and types of motorcycles used in movies that hit the silver screen several decades ago, and in some cases as far back as vaudevillian days. I thought some of the displays might be a stretch of the imagination but I didn’t care if the motorcycles made sense relative to the displayed movie text. I’m a motorcycle buff, not a movie buff, and I was only there to study and admire the bikes. The Deeley Motorcycle Exhibition is a class act, and like any motorcycle museum, is well worth the price of admission for any two-wheel gearhead to spend an afternoon.