We’ve all heard the song lyrics “I am woman, hear me roar,” but have you ever thought much about what this means? Sure, insert jokes here about keeping on a woman’s good side or trying not to upset her. Trust me, I’ve heard them all. For a minute, though, I want you to think about your sisters, daughters, wives and lady friends. We all hope for the best for those closest to us, right? We hope that the women in our lives will develop into something great; that they will have a voice, make changes in the world and be part of the greater good. So yes, those lyrics speaks to women having a voice and sharing their wisdom. However, now I’m going to throw a wrench in the plans. What if that roar was also the low, rumbling sound of the dual exhaust on a tricked-out Harley-Davidson Sportster? What if that roar was a group of 50 women on motorcycles, thundering through a city of over two million people, stopping traffic and turning heads? Now that’s the roar that we’re talking about. This roar is the inner lioness that exists in all of us female motorcycle enthusiasts. 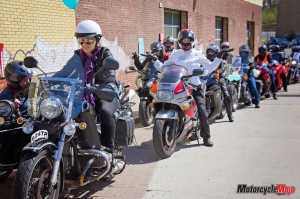 For some, the lioness comes out more often than for others. Those lionesses are the women who live life on the edge, who always seem to be on an adventure and who don’t care too much about what others think. However, for others, the lioness quietly lurks, waiting for the right opportunity to pounce and announce her presence to the world. These are the women who are loyal, nurturing and always there when you need them, yet they quietly forget to take care of themselves at times. That is, until the stars align and the time is right for her to take on the full potential that she is. For many female motorcyclists all over the world, that opportunity is International Female Ride Day, held once a year on the first Saturday in May. 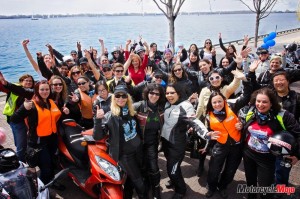 I often get asked why. Why is it so important for women to announce to the world that they ride a motorcycle? Why do they need a special day for this? Well, my response is simple: We ride because we can, and we create a buzz around this because we’re proud. Damn proud. Women have been riding motorcycles since before they could vote or were allowed to wear pants (that’s right, you try to pull off a dress on two wheels). Kudos to the Van Buren sisters for challenging that stereotype.
Getting on two wheels feels like putting on your Super Woman cape; you suddenly transform into this alter ego/lioness who commands attention on the road and has the confidence of a supermodel on the runway. It’s an amazing sight to see that transformation. However, this change doesn’t happen overnight. It’s a progression, like a seedling that takes time to grow into a beautiful flower. I’ve seen this transformation firsthand.

An Open Invitation Around the World 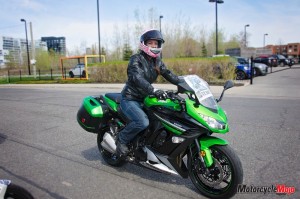 Not long ago, I was working at a motorcycle apparel store, and a woman came in to purchase a new jacket. I took that opportunity to get to know her a bit more and subtly asked if she had heard of the upcoming International Female Ride Day. She shook her head, quietly stating, “Oh, I couldn’t do that.” I could see the fear and intimidation in her eyes. She was nervous about getting outside her comfort zone, and so I challenged her, welcomed her and encouraged her to join one of the local Female Ride Day events. There was a slight sparkle in her eyes, and I knew that the transformation had started. It wouldn’t be long before I saw her at a future International Female Ride Day.
Women worldwide from Ireland, Hungary, India, Kenya, New Zealand, the United States, Canada and elsewhere united on May 7 to celebrate the 10th anniversary of this event. I joined Vicki Gray, creator of International Female Ride Day and Motoress, in Toronto for a fun-filled day of riding through the city, lunch (compliments of Kawasaki Canada), prizes and camaraderie with fellow riders. Dozens of women attended, many new to the event and some who were veteran Female Ride Day participants. One woman had travelled from Boston to join the group, and share the exciting news about her plan to travel the world on her bike on a journey of self-discovery and adventure.

Riding a Kawasaki Ninja 1000, my alter ego was front and centre. I went from “Jessica the businesswoman” to “Jess the fierce biker chick.” This bike made me feel powerful, alive and oh so confident. Gone was any shyness or apprehension I may have had, replaced with strength, determination and a bit of mischievousness. I felt like my true self. I felt part of a greater whole.

That day, we started off at Toronto City Hall, which made for the perfect photo op for our group. We all gathered in front of the controversial Toronto sign, while CityNews Toronto filmed the action. I’m sure we were a sight to see amid blue balloons and decorated bikes, which included cruisers, sport bikes, a scooter, trike and chopper. Vicki rode along with the group on a Kawasaki Z1000, with a proud, gleeful smile on her face throughout the day. It’s amazing to see how something she started 10 years ago has grown to become an international event.

As a group, we rode to BMW Motorrad Canada for refreshments, and then continued on a route through the city. For a country girl like myself, I always find it fascinating to ride through the city. My senses were in high gear as I navigated with the group through traffic, pedestrians and other community events. People stopped to watch us and take pictures as though we were celebrities. We weren’t celebrities, though – we were just women on motorcycles, enjoying a day that we’ve taken as our own.

New friends were made that day, stories were shared at each location we stopped at and I learned a bit more about myself. With hugs, goodbyes and promises to connect another time to ride, we all went our separate ways. I packed my luggage (and some leftover pizza) into the hard saddlebags on the Ninja 1000, which seem to be a bottomless pit in terms of what they can hold. The ride back home was uneventful and quiet compared to the day I had, but it gave me time to reflect and think about the fun that was shared. My lioness had retreated for the time being – that is, until another opportunity comes up for her to make an appearance.