Push your personal limits to see the world around you, regardless of the style of bike you ride

Many people feel constrained by the type of riding they can do with their motorcycle, and with the vast spectrum of machines offered in today’s industry, it’s no doubt we consider some bikes to only offer one type of riding. I’ve always believed that the rider makes the bike, not the other way around; however, for some, this may not be the case in our modern riding world. I came to this realization through a conversation with another motorcyclist during a short motorcycle trip this past fall.
While on a ferry crossing the Columbia River in British Columbia, I scouted out the owner of the only other bike on board for some good two-wheeled conversation to help pass the time. It was a couple travelling on a Triumph Tiger 1050. 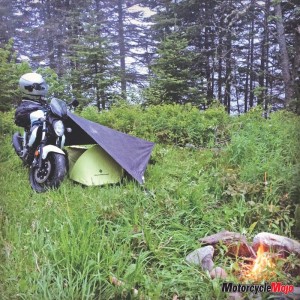 As we spoke about our motorcycles, along with how the passion of travel fuels us, I made a comment that the off-road excursions must be fantastic on the Tiger. The rider looked at me with an inquisitively surprised look and mentioned that he wouldn’t attempt any off-roading with his motorcycle. I looked at him with a sense of curiosity, as I had guessed that I’d done over 5,000 km of off-road riding on my 2009 Suzuki Gladius SFV650 this past season alone. When I told him this, he chuckled under his breath in disbelief that I would be able to ride off-road with my two-wheeled beauty. My little 650 sat there with slick street touring tires and no bash bars or any protection of any sort for the bike, which was splattered with mud from top to bottom. It was clear that he had assumed it would be out of its element riding anything other than smooth tarmac. 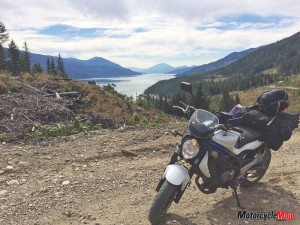 I think the motorcycle industry saw the initial spark of adventure touring with the 1979 release of Ted Simon’s book, Jupiter’s Travels. In it, Simon describes departing on the trip in 1973 and travelling through 45 countries on his 500 cc Triumph Tiger 100. It inspired both riders and non-riders alike to travel and look beyond the horizons that had been set by our society. In 2004, with the release of arguably the best-known motorcycle adventure story, Long Way Round, Charley Boorman and Ewan McGregor again brought to light a new plane of existence in travel. They created a stunning and captivating show that would be watched by millions, again sparking the inspiration for riders and non-riders to push the boundaries of their travel. They also drastically shifted our views on what type of motorcycle should be ridden and how riders plan their travels. After the release of Long Way Round, BMW’s sales skyrocketed, and with the release of the R1200GS in 2004, the company saw the highest sales ever of one particular model. This ultimately shifted the motorcycle industry from cruiser-style touring to adventure touring, changing the perceptions that had been set in stone for bikers for so many years.

Of course, for some of you, this theory of challenging the abilities of your bike may not apply; you may already have what you consider a very versatile, multi-faceted bike. However, for others, you must adapt and see the opportunity in owning something that you may not at first find ideal. This unlikely partnership can often turn into a bond perfected by the growth of both man (or woman) and machine. My motorcycle has gained a personality all its own – her name is “Betty,” she’s pretty unsuspectingly badass and knows how to handle herself.

From getting stuck in snow, fishtailing through deep sand, summiting countless mountains and experiencing the unfortunate and unexpected demise of a deer, Betty has put me through hell and back, but with some fun, exhilerating rides in between. She and I have been together for over 50,000 km and I don’t plan on stopping now.

Ultimately, the idea of exploring any road with your motorcycle can only be accomplished with competent skill and knowledge of your bike. Having a background in riding off-road is an absolute necessity. Another key point to think about is the greater factor of risks while out riding: motorcycle breakdowns, crashes and animal encounters are all very real factors that come into play while riding off-road. Being prepared is essential, and having a riding partner with a similar experience level and passion as you can be the difference between a great ride and a disaster.

No matter what you have for a motorcycle, it’s clear to any rider that exploration is not a subject for the faint-hearted. For some, the idea of exploration is limited to the pavement that we see before us. However, for those who’ve experienced the pure awe of being somewhere that very few people have experienced, it’s an addiction for which the only rehab is to keep riding and discovering. To gain the awareness in the vast wilderness and see the beauty of this planet via two wheels is a sacred experience. So go ahead, get lost, explore and challenge yourself and your boundaries.

It was the late David Bowie who said it so perfectly: “I don’t know where I’m going from here, but I promise it won’t be boring.”