The first time Cliff Morgan saw a motorcycle he knew he had to have one. It was 1961, and the trouble was there weren’t many machines available in his hometown of Conception Bay South, or anywhere else for that matter, in Newfoundland and Labrador. At 16 years old, Morgan did manage to find an old BSA that had made its way over from the mainland, and he paid $15 for the hulk. He never managed to get it running, and although it was still a project, he made a profit when he sold it for $25.
With that money and a little extra earned while working on a farm, Morgan finally bought a war surplus Harley-Davidson 45 WLC. He gently coaxed the old H-D 45 around Conception Bay South, and in the early 1970s worked his way up to buying a Harley-Davidson FLH that had been retired from the constabulary service. “I rode that bike for as long as I could, and owned it at a time when there were very few other Harleys around here,” Morgan says. Parts were hard to come by, and the only way he could have the bike serviced was to take it to the mechanic who looked after the police machines. “Because of the parts situation and the lack of any real service, we never rode too far,” Morgan says with a laugh.

A Group for All Riders 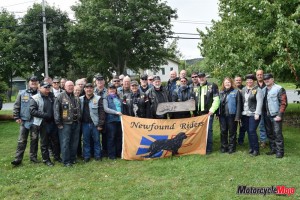 It’s hard to imagine that Morgan had any idea his early motorcycling experiences would lead to the formation of a group dedicated to helping some of the lesser-fortunate children of Newfoundland. By the mid-1990s, Morgan had been motorcycling for close to four decades, almost exclusively aboard Harley-Davidson machines. “The Harley Owners Group came on the scene, but it wasn’t inclusive of riders on different makes,” he says. “So, a group of us [including Gordie Collins, Bob Peyton and Mel Strong] started the Newfound Riders, and basically, we wanted to raise money for children.”
The Newfound Riders, now with close to 100 members, has become much better organized and includes the Newfound Foundation. In recognition of the group’s dedication to community service, and especially to meeting the needs of children, the Newfound Riders are this issue’s featured legend for the province of Newfoundland and Labrador. 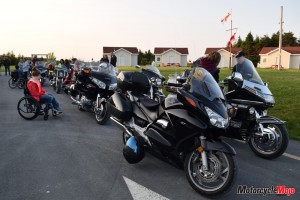 One of the first events the fledgling Newfound Riders held to kick off fundraising included raffling off a quantity of Lamb’s Navy Rum. After the raffle, the small group of motorcyclists had raised more than $2,000. The group repeated these efforts for a few years, but soon learned that some of the charities the Newfound Riders wanted to give the money to were leery of the funds being connected to the sale of alcohol. Continuing to meet with that resistance, the Newfound Riders had to reconsider its approach. It’s around this time in the life of the Newfound Riders that Robin Laing of St. John’s fulfilled a boyhood dream. Since he was a teenager, Laing had wanted a motorcycle but could never afford what he yearned for most – a Harley-Davidson. He’d buy raffle tickets for machines and hope for the best, but that plan never proved fruitful.

In 2000, however, Laing was finally able to purchase a Harley-Davidson Fat Boy, and through a circle of friends was introduced to Morgan. Laing learned about the Newfound Riders and shortly thereafter became the organization’s president. While Laing doesn’t think he deserves the credit, he did have a hand in reinvigorating the somewhat flagging group, as its membership soon jumped to 80 or more riders. 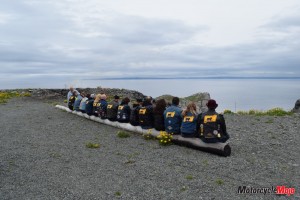 Now a past president, Laing continues the story of the Newfound Riders: “The charities we wanted to give the money [raised by selling the Lamb’s rum] to didn’t want the money,” he recalls. “So, we set up the Newfound Foundation, with the objective of helping children in need who might otherwise fall through some cracks.” According to Laing, the foundation was formally set up in 2006, and has since managed to raise close to $250,000. The days of selling raffle tickets on rum are long over, and the group now annually raffles off a new Harley-Davidson. Newfound Riders takes delivery of the motorcycle in late August, and for the past number of years has displayed the machine at the Princess Auto store on Aberdeen Avenue in St. John’s. Tickets, at $20 each – only 3,999 are printed – are sold until just before Christmas. The draw takes place live on VOCM radio between Christmas and New Year’s.

The money from the draw goes into the bank and provides funds for the foundation, together with other charities the Newfound Riders wishes to assist, such as the Juvenile Diabetes Foundation and the Candlelighters Association. To access foundation funds, the parents or guardians of a child with specific needs can apply through the Outreach and Social Work division of the Janeway Children’s Health and Rehabilitation Hospital in St. John’s. “The hospital lets us know if a child needs something like a respirator or a wheelchair – or something else, like meals or another piece of equipment – and the foundation, and by extension the Newfound Riders, decides whether to fund it,” Laing says. Other needs the foundation might support include providing transportation or accommodation costs for out-of-province medical treatments and help to cover the costs of drugs, where there might not be any provincial or insurance plan coverage.

As the name would suggest, the Newfound Riders is essentially a group that exists to ride motorcycles. To that end, weekly rides are held every Thursday throughout the summer months. There are also a number of special rides in which the group participates: the Ride for Sight, the Ride for Dad, the Canadian Army Veterans’ “No Surrender – No Retreat” ride and the Glenn Kennell Memorial Ride for Cystic Fibrosis.

One of the most important rides on the Newfound Riders’ schedule, however, is the Constable Sam Jeffers Memorial Motorcycle Ride. Sam Jeffers of Carbonear was a member of the Royal Newfoundland Constabulary, and served as a motorcycle officer. On September 18, 1957, while on duty at a busy St. John’s intersection, he was hit by a car and suffered serious head injuries. This was a time before helmets, and Jeffers never fully recovered from the brain trauma. He lived the next 43 years at the Waterford Hospital before he died on September 4, 2000. “We wanted to promote motorcycle safety and awareness,” Laing says of how the ride got its start. “We also wanted to honour a motorcycle enthusiast, and in 2003 approached Sam Jeffers’ brother, Ellis, to ask his permission to have a motorcycle run in the family name. Ellis said yes to the idea, and donated several hundred dollars to our efforts.”
The funds raised through the Sam Jeffers Memorial ride are given to the Newfoundland and Labrador Police and Peace Officers’ Memorial Association. According to Laing, the money raised (which is also matched by the Newfound Riders) goes toward maintaining the police memorial located at Confederation Building.

To further commemorate the memory of Jeffers, in 2013, the group commissioned and installed the Sam Jeffers memorial plaque and monument on the grounds of the town council building in Carbonear.
Laing says all the charity rides are very scenic. “Most of our populated area is on the coast,” he notes, “so nine times out of 10 we’re riding near water on winding, twisting roads. The scenery is quite stunning and it changes minute by minute, too; it could be barren, it could be trees, it could be ocean.” 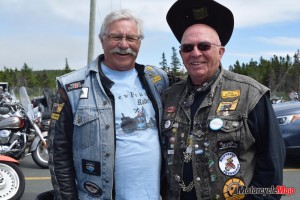 In 2016, the Newfound Riders celebrated a significant milestone with its 20th anniversary RumRunners’ Rally, an event that again supports the group’s Newfound Foundation. Held in early July at the Jack Byrne Regional Sports & Entertainment Centre in Torbay, the rally offered three days of rides, games, entertainment and prizes. There were Newfoundland-based motorcycle dealers and custom-bike builders, together with travel-related exhibits, and the rally drew thousands of enthusiasts from across Eastern Canada and the United States.

The first day of riding fell on July 1, and that’s Memorial Day in Newfoundland and Labrador, when the province pauses to remember the infamous fight at Beaumont-Hamel during the first day of the Battle of the Somme. Hundreds of soldiers from the Newfoundland Regiment died in the advance that took place on that day in 1916 – exactly 100 years ago. Rides departed from the Jack Byrne Arena to three different Memorial Day services, including the parade to the National War Memorial on Duckworth Street in St. John’s. Laing no longer has the 2000 H-D Fat Boy that brought him to the Newfound Riders. He traded that machine, with 92,000 km on the odometer, for a 2010 Ultra Classic. With the riding he’s done with the group, and by himself through the northeastern states and provinces of Eastern Canada, he’s now got more than 45,000 km on the bike. He’s just one member of the Newfound Riders group who continues to log thousands of kilometres while touring on two wheels in support of the group’s Newfound Foundation. Laing is also thankful there are now several Newfoundland-based motorsport dealers, including Mile 1 Harley-Davidson and Atlantic Recreation in Mount Pearl and Freshwater Suzuki in St. John’s. These dealerships continue to provide parts and service to all Newfoundland riders, unlike when his friend Cliff Morgan first started riding and was nervous about travelling very far…