Is Kawasaki reading a page from its own history book and rekindling the horsepower wars?

Deafening wails ricochet off every structure in the tranquil little town and careen into the surrounding countryside like sonic projectiles from a three-barrelled Gatling gun. If the neighbours had slept in, there’d be no need for a caffeine kick-start now that the local menace has so conspicuously announced its presence. Something welled up inside me that quiet morning when the H2 fired up – I believe it was terror mixed with the realization I may have wet myself. In my defence, I was only about 12 years old and the fire-breathing 750 cc two-stroke triple Dad had put together, for at least the third time, was now wearing open pipes. The vibrations from the new modifications enabled the Kawi to literally do a pirouette on its kickstand with just a twist of the giant foam grip, and by the time it had turned 180 degrees, you couldn’t see the other end of the bike for the sweet bluish smoke. That original Kawasaki H2 from the early 1970s is the bike that solidified my love for machines with a decidedly devious side. In fact, our own H2 had sadly lived up to the morbid nickname of widow maker bestowed upon the model when its previous owner met an untimely end.

Out of the Haze 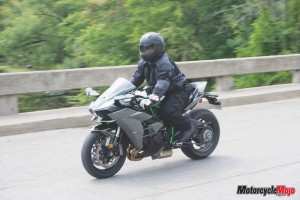 Fast forward a couple of decades and my brain emerges from the haze of a childhood flashback just in time to nod, acknowledging the staff from Kawasaki as they give me instructions on how best to avoid escaping Earth’s gravitational pull by using the correct mode, which is activated by pressing the … “Sorry guys, you lost me at ‘Here are the keys!’” After a few more agreeable nods on my part, and an assurance I’d return the 2015 H2 press bike in a week’s time, looking just as pristine as it did at that moment, they appeared satisfied and left me to the task at hand – a task, I should mention, that involved driving in bumper-to-bumper rush hour traffic and 40-degree heat for the better part of an hour as I snaked my way north out of the city. The reward for my efforts sat imposingly over my route home, its black underbelly illuminated by flashes of lightning while depositing a great deluge on the roads ahead. Stopping halfway home to stow my camera gear and close all the vents on my jacket gave me time to reflect on an enlightening first few kilometres aboard Kawasaki’s new flagship. Having already written a tech piece on the H2 and its incredible 200-plus hp 1,000 cc supercharged powerplant, electronics suite and overall drool-worthiness, I felt prepared for the experience. But I was wrong – and in some rather unexpected ways, at that. 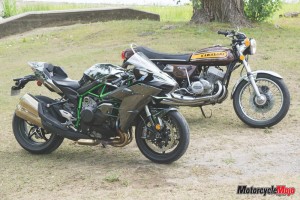 First, the bike is even more wickedly fast than I expected. Nothing else I’ve ever ridden accelerates like the H2, thanks to the immediate power delivery from idle to redline; where a ZX-10R or similar four-cylinder sport bike will accelerate almost as quickly, it can only do it while in the very top of the rpm range. The H2, on the other hand, can accelerate at an astonishing rate from any rpm, in any gear and at any time. And that’s what makes it feel completely different from every other production bike made today. Well, that and the hysterical whistling and chirping emanating from the supercharger and the airbox’s pressure release valve mounted just ahead of the rider’s crotch – pandering to the male ego? Perhaps. Beastly power aside, this bike possesses a few other surprises, like the ability to putt around in the lower rpms like a civilized commuter. Even the seating position is more relaxed than it might appear, something I discovered on a 500 km one-day round trip to meet up with Ian Taylor, the owner of the classic H2 you’re seeing in the accompanying photo. 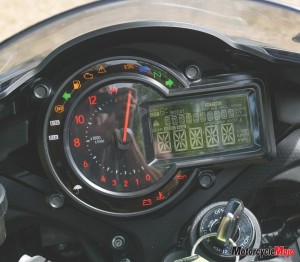 While the bike is fairly well mannered and less of a torture rack on long rides compared with other sport bikes, it does still have a very heavy clutch pull (this is remedied in the 2016 models, which have a lighter clutch) and it will toast your right foot if traffic spends more time stopping than going. The biggest issue the H2 has in terms of real-world usability is an extremely abrupt power delivery off idle. In town, it’s always in the back of your mind and it also affects cornering, where it becomes difficult to hold a line if you need to pick up the throttle. This is most likely due to a combination of a compromise in fuel mapping for emissions purposes and a ludicrous amount of power.
But let’s be honest here, who’s spending $28,600 on an H2 for urban commutes, especially when it
chugs fuel at a rate more befitting something with four wheels? I averaged 8.1 L/100km with some restraint, though a heavy hand will increase that number significantly!

Ride the H2 in wide-open places or preferably on a track and the true intentions of its designers become clear; the heavy clutch disappears with the use of the impeccable quick shifter on upshifts and the weight of the pull feels just right for managing downshifts. At speed, exhaust heat disappears, much like the surrounding scenery and the seating position puts you inside an eerily calm bubble of air that could only have been tailored by countless hours of wind tunnel testing.
Developing the bike’s aerodynamics and, by association, the exterior design, with its sharp edges, ever-changing angles and minimalist bodywork (just try finding a spot to secure a suction cup mount for a camera. I dare you) have resulted in a sinister yet functional bike that looks like no other, especially in its mirror-coated black paint job. 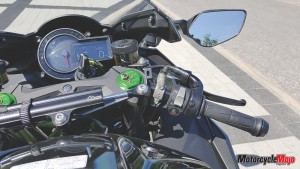 In terms of on-road performance, the Brembo brake components live up to their billing, hauling down the 237 kg wet weight of the H2 with little effort and plenty of feel. The front fork is a fully adjustable KYB ASO-II (Air-Oil Separate) unit, the first of its type used on a production street bike. The design was originally developed for motocross applications and has a particularly smooth action. The rear piggyback Uni-Track shock is also fully adjustable and performed superbly with my 190 pounds on board. The steering is a little heavy compared with most sport bikes, no doubt due to the extra weight, and transitioning into and out of corners takes some effort at the bar. The overwhelming feeling is one of stability and composure, and that’s reassuring, given the performance on tap. An Öhlins steering damper adds to that stable feeling, helping to tame the front end after inevitable wheelies or even under hard acceleration as the front end gets light. I didn’t notice any significant head shaking, so I’ll assume it was doing its job well.

Heart of the Beast

And speaking of jobs well done, it’s time to give kudos to the team that developed the powertrain for the new H2. This 998 cc inline-four is not the engine used in the ZX-10R. It’s an all-new design specifically engineered to operate under high loads at high rpms with relative ease. The engine was created around its oversized oiling system, to ensure maximum cooling efficiency. With engine in hand, designer Kohei Yamada attempted to find a supercharger capable of meeting performance and size requirements for the project, but none existed. His solution was to turn to Kawasaki’s own Gas Turbine & Machinery division, which designs and produces jet turbine engines. The centrifugal supercharger they came up with is among the most efficient and compact variants ever created.
The 6.8 cm-diameter forged impeller at the heart of this supercharger can spin at over 130,000 rpm, its six vanes building an immense amount of pressure that is then rammed into the aluminum airbox and subsequently inhaled by the engine at a volumetric rate approximately equal to one bathtub’s worth of air per second. This all translates into a 200 hp motorcycle – when it’s stationary, that is; once in motion and under full acceleration, the H2 makes use of the ram-air effect through its left-side mounted air intake, further increasing its peak power to around 210 hp.

Ensuring the gobs of power are transferred from the engine to the rear wheel is a six-speed dog-ring gearbox, similar to those found in MotoGP and F1. While most motorcycle transmissions use a shifter fork to slide the gears into position, this unit allows the gears to stay stationary, instead moving the much lighter dog rings to engage a gear. That also means it can shift faster and handle more stress. You can feel the incredibly satisfying positive engagement of beefy mechanical components at the shift lever with every gear change. Even more impressive is the speed and smoothness at which those shifts are accomplished when you give a slight nudge to the Kawasaki Quick Shifter, though it’s limited to upshifts only, leaving downshifting to your left hand and the slipper clutch should you get a little premature in selecting a lower gear. With the model I tested I found it very difficult and even frustrating to find neutral.

There are in fact many features on the H2 whose duty it is to assist and protect the rider. They include Kawasaki traction control, with three modes plus an off setting; Kawasaki intelligent anti-lock brake system; power modes to limit and tame throttle delivery; the above-mentioned slipper clutch; launch control; as well as selectable engine brake control. During my week with the H2, I tried to fiddle with all of them, and in the end found that simply leaving it in full power mode with an intermediate setting on the traction control and regular engine braking was ideal. Thankfully, the bike remembered my settings each time I turned it on, saving me the need to fiddle with the left bar-mounted directional buttons and dash menus.

For all the technology and options packed into the bike, I was surprised to find a very traditional and uncluttered dash. A left-side mounted tachometer is the most prominent feature – as it should be, with the digital portion on the right displaying speed, electronics settings, odometer and trip functions.

With everything set just as I liked on the H2, the riding experience was awesome, and I’ll say again, there just isn’t anything like it out there. As crazy as the original H2 was in its day, the new version is just as bonkers in its own way. My personal connection to the brand and heritage of the model brought out memories and feelings I hadn’t experienced in a long time, especially while riding in formation through the countryside next to an original H2 just like my father’s. That ride is perhaps the high point of my career in the motorcycle industry, so a big thanks goes to Ian Taylor for helping us out.

That first day aboard the H2 in the heat, traffic and torrential rain illustrated perfectly just how special a bike I was riding; even when the rain and humidity had invaded every piece of my riding gear, the only thing rolling through my head was amazement at what Kawasaki had created.