The Colonies welcome a new adventure

A few years back, Editor Roberts and I were strolling around the Toronto Motorcycle Show and stumbled upon a unique-looking adventure bike. It bore a resemblance to something you might see contesting the Dakar or Baja 1000, with its high-mounted instrument cluster and windshield towering above the rest of the crowd. We managed to snag a brochure and corner a representative from the booth. Both of us came away from that first meeting with more questions than had occurred to us to ask, and over the intervening three-plus years, my list of questions, and interest in that fine-looking British bike, continued to build.

After the Red Tape 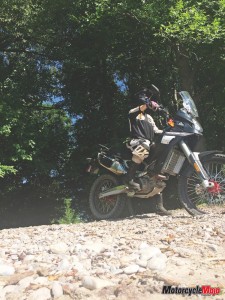 Three years after that first encounter, I was swinging a leg over the first Canadian press bike outside Old Vintage Cranks in Acton, Ont. Right off the bat I was pleasantly surprised at how manageable the 890 mm seat height was, and even more so once the suspension had settled under my weight. There’s also a taller seat option, as well as options to lower the bike even further.
In fact, this would be a good time to mention that virtually every part of the bike can be spec’d by the owner: everything from the suspension manufacturer down to the shifter lever and pegs. In the case of our test bike, we had the optional soft-luggage brackets; soft-shell, three-piece Tough Bag kit; solid mounted bars (rubber mounting optional); an adjustable windshield mount; some gnarly motocross pegs; a basic skid plate (a much beefier one is available); and no functional tachometer on the very basic and universal- looking gauge pod.

That last one may stand out for some of you, but I can assure you there’s really not much need for a tach, because the 449.5 cc BMW single-cylinder engine will tell you when it’s time to shift the five-speed transmission and when it’s time to open the throttle even more. The 40 hp on tap and 31.6 ft-lb of torque is sufficient on the road and gets up to highway speed easily, with quite a bit in reserve for passing. The tall windshield and gauge pod make cruising around at speed a comfortable affair, while the narrow seat isn’t all that bad to spend a few hours on. While the seating position was ideal, the vibration through the solid mounted bars was not, and my hands would ring like tuning forks after more than an hour’s ride on the highway. But that’s to be expected from a single with no bar end weights installed; mind you, the compromise pays dividends off-road, where the communication between the rider’s hands and the front end is fantastic. 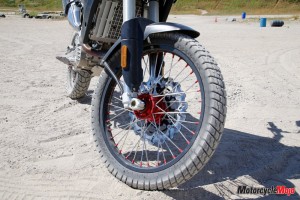 All the components on the GP450 are premium quality, and that starts with the 47 mm inverted front fork with rebound and compression damping (WP suspension is optional). The rear shock is equally adjustable and can be firmed up enough to deal with most off-road terrain, short of maybe the local motocross track or extreme enduro situations. The front and rear hubs are impressive machined units wearing handsome red anodizing, as are the triple clamps and bar risers. Brake components are from Brembo, and they act on a 320 mm front disc and 240 mm rear. There’s absolutely nothing to complain about here, with great stopping power and feel at both ends.

The 21-inch front and 18-inch rear Dunlop Trailmax tires are fine for on-road and provide decent grip without much road noise, but they somewhat limit the off-road abilities of the bike. If you’re going to go hard on the trails, get something with a more aggressive tread. Where you will find no compromise is in the design of the aluminum Bond-Lite frame. Much like the chassis on some Austin Martin vehicles, this frame uses both fasteners and bonding agents to secure the 15 forged and machined segments together. The strength and low mass of the unit are major contributors to the fantastic on- and off-road handling of the GP450 Adventure and its diminutive 125 kg dry weight. The aluminum swingarm looks to be of equal quality and very closely resembles the one used on several KTM/Husqvarna models. 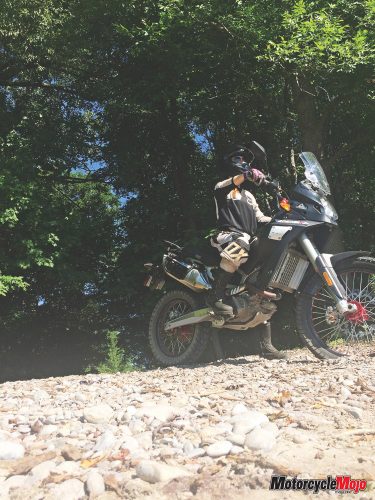 One of the more impressive features of the GP450 is the 20-litre under-seat fuel tank. It keeps the centre of mass low in the chassis, unlike many of the tall adventure bikes, which get top-heavy when fully fuelled. With an average fuel consumption of about 4.5 L/100 km, this bike is an ideal companion for getting to and exploring trails less travelled. I tested my own theory by loading up the soft luggage and heading north to try to find as many unfamiliar dirt roads and trails as I could on the way to visit family for several days. By the time I arrived at my destination some four hours later (usually a two-hour drive), I’d gotten lost three times by intentionally chasing dirt tracks into the bush. At one point, I found myself under the wing of a lonely old pontoon plane on the bank of a grass-lined river, enjoying the uncertainty of it all.

The one and perhaps only stumbling block for the CCM GP450 Adventure is the base price of $13,499, and we can blame our poor exchange rate for some of that. By choosing the upgraded S model ($16,499) or Supermoto RS model ($16,999 with both on- and off-road wheel and tire sets), or just by checking a few of the many option boxes, that price starts to increase quickly. I absolutely love the bike and found myself trying to justify the RS version to myself. Admittedly, it’s a tough sell, but you are getting what you pay for in terms of components and overall performance. Come to think of it, there aren’t many other stock bikes with the combined touring efficiency, low weight and bushwhacking abilities of this CCM.