The word Gaia loosely translates as “Mother Earth” in Greek mythology. So, how long would you spend planning a four-year motorcycle trip around Gaia? Three months? Six months? A year? Manu Torres from Spain and Ivana Colakovska of Macedonia spent – well, they didn’t plan it at all. In fact, they didn’t even know anything about motorcycles, but they thought that seemed like a good way to travel around the world because it was cheap and accessible. They just needed a bike. 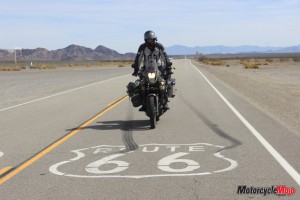 The first dealer in Greece laughed at them when he heard their plan – as did the second. But the third saw the determination in their eyes and decided to help them. He took the time to talk with them about what they were taking on, and when the pair convinced him that they were sincere, he sold them a Yamaha XT660Z Ténéré. And that was the beginning of the trip.

The beginning actually goes back a bit further. First, they had to meet, which they did when selling jewellery to tourists on the beach in Mykonos, Greece. The two hit it off, and started travelling together, just here and there in Europe at first. They didn’t have much money, but neither is a worrier.

A short trip to India came next, where Torres and Colakovska had their first exposure to motorcycle travel. They spent three months travelling two up (she doesn’t ride) on a Royal Enfield and learned that a motorbike was a great way to travel. “It was a terrible motorbike,” says Torres. “It broke down every day. But people would appear – tools would appear – they would swarm around the motorbike and somehow it would be fixed, then they would just disappear.” Colakovska laughs. “It was like magic!” she adds. And that’s when they were bitten by the moto-travel bug.

Three years ago, they bought the Yamaha and started what they call “Around Gaia.” I ask them about the planning. “We just go,” Torres says in his typically understated way. He is a man of few words. That’s pretty much his answer for everything. How did you survive the cold mountains? How did you survive attempted robberies? How did you deal with Colakovska’s badly broken leg? How do you deal with being together 24-7 for the past three years? “We just go.”

Next to the lanky, understated Torres, Colakovska is a petite firecracker. I ask her how their relationship has survived. She rolls her eyes at Torres and laughs. He seems unperturbed. “He does not change. I change,” she says. She gives me some examples of how Torres has not changed. He looks on passively. Then from Colakovska: “I used to be more . . . easy to get angry, blow up. Now I’m more calm. Things work out. We just go.” 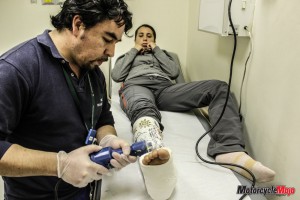 Again, I’m back asking about planning. After all, I am the king (or “knucklehead”) of being unprepared, but these two – they wore tennis shoes for half the trip until Colakovska broke her leg, for God’s sake. They really didn’t plan anything! Did they at least have a GPS? No. “We opened a map and picked three points: Australia, Argentina and Alaska.” And they settled on three rules: no GPS, just ask for directions and never pay to sleep anywhere. “Then we go.” I’m sensing a trend. That was their entire planning stage.

So we move on to their experiences while travelling through [at the time of this interview] 41 countries over the past three years. There are many notable memories, too many for this article. In Kazakhstan, they had to ride through mountains so high that they got altitude sickness and Colakovska had to have oxygen. Conditions were so dire that she cried, and Colakovska gives the impression of one who does not cry easily. The only thing they saw on the road was wolf tracks. They had to sign in at an army outpost at the start of the mountain road so the army could check off that they made it out alive on the other side (although no one came looking for them even though it took two weeks to ride the 800 km road). It was so cold, they had to stop every 100 km at the nearest village to warm up in someone’s hut while their clothes thawed over a fire. They were completely unprepared for the snow and freezing conditions. This was one of the times that Colakovska thought about going home. But they just kept going. Villagers would welcome them into their homes and provide extra layers of clothing for them, whatever they could spare, which wasn’t much. The conditions could have killed them. But “We just go. Now we don’t worry about weather anymore. We survived.” 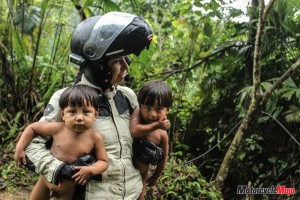 So I ask, “Why?” Why take on this incredible challenge with no planning and very few resources (they’ve had almost no money from day one)? “To meet people,” Torres says – they are killing me with these simple answers. Isn’t life supposed to be more complicated? Aren’t we supposed to plan everything to death, buy expensive gear and worry about the stock market? Nope. Just mix with people, spend time with them, don’t shut the door and, most importantly, learn from them. You run into a problem, you find the solution, there, on the road. My middle-class North American brain is having some trouble processing this state of mind. Torres appears unconcerned with my struggle to comprehend.

In India, a family in a small village took them in. It was a great honour for the father to host them in his two-room home. One room is for the animals so they won’t fall victim to predators, and the other for the family. Their host insisted they sleep in the family bed while he sleeps on the floor at the foot of the bed to keep an ear open and ensure no one messes with their bike. In the middle of the night, the father heard a sound and fearlessly rushed outside with a bow and arrow to protect the Yamaha.
In Australia, the greatest threat was a kangaroo. Apparently, they like to jump into the light created by vehicles after dusk. No one wins in that situation.

In South America, on a snot-covered road, the bike went down and Colakovska put her foot out to try…