If there’s one thing you must do, it’s experience the Algarve

“If you do one thing in your life, come to ride in Portugal,” said Gwyn Barraclough, one of the guides on our recent ride around the hills and dales near Vilamoura, Portugal. Gwyn’s thick Yorkshire accent made the phrase even more stirring as the words resounded in my ears the entire week we spent darting around the Algarve region of Portugal on the Off Road Skills Portuguese Paradise tour. 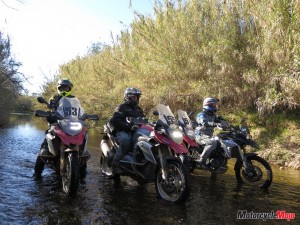 The formula is not complicated: You arrive on Sunday, go through the basic paperwork and have a welcome drink. Monday morning, the organizers hand you keys to a brand-new BMW R1200GS and divide you into similarly skilled groups; you then proceed to ride the wheels off the GSs until you have had your fill – and then some. Our group was made up of some very adept riders from the U.K., one from Romania, and Dualsport Plus’ Clint MacBride and myself from Canada. Two other Canadians, Neil Pond and Brian Barr, joined us, but were slotted into other groups.

A Man With Experience 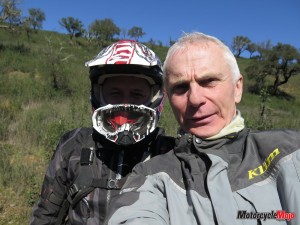 If you are not familiar with Simon Pavey, he is one of the most experienced off-road riders on the planet, with 10 Dakar Rally participations under his belt. Along with Pavey’s numerous other significant accomplishments in off-road competition, his Off Road Skills GS training facility in Wales is one of the most highly regarded rider training schools in the world.

As a pre-season incentive for his students, Pavey and his team organize a trip to the warmer weather. For the past seven years, he’s taken a truckload of BMWs to the south coast of Portugal to share his passion with 48 riders. In speaking with many participants, I learned that everyone appears to be having the trip of a lifetime. Pavey’s intimate knowledge of the Algarve back roads makes for a thrilling week of riding on two-track farm roads and seemingly endless forest access roads that wind in and around the low hills of rural Portugal. He also throws in some single-track, gnarly hill climbs and long, stony riverbeds that are all considered public roadways. Often, we’d ride long distances on some truly tiny unmarked dirt paths, then suddenly come face to face with a road sign in the middle of nowhere.

If the challenging off-road sections aren’t enough, the sinuous paved roads are just as much fun and virtually void of traffic. The pavement is smooth, grippy and chock full of arcing corners. In fact, the riding conditions in this part of Portugal are so ideal that many motorcycle media launches are held in the immediate area. 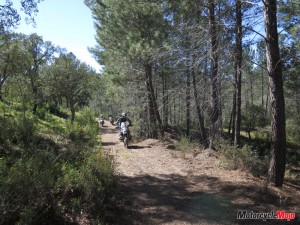 The Portuguese Paradise tour is not for someone who prefers to chinwag; it’s for riders who prefer saddle time to socializing. The entire five-day tour was spent riding, with only short coffee breaks and about an hour for lunch in a different restaurant each day. Having said that, our group truly enjoyed one another’s company, and by the end of the week, we all felt like a band of brothers, exchanging contact information and plenty of high-fives.

Pavey’s good-natured demeanour and his team of easygoing guides created much of the tour’s magic. It’s apparent early on that everyone shared the same interest in riding and enjoying the journey. The guides are well versed in riding and were quick to offer tips and encouragement.

Each group had a custom-tailored day’s route according to their abilities and desires with convenient stops, well chosen for their location and food selection. One of the nicest things about the tour is you never have to open your wallet during the day, because all meals, coffee, snacks and fuel are included; only the evening meal is up to you. As Vilamoura is a tourist destination, there’s a wide array of places to eat in its marina, and the quality of the food is superb.

Vilamoura sits on the Atlantic coast and can be quite busy during the tourist season. The week started out easy. On the first day, we warmed up with some pavement riding while heading north out of the city. Thankfully, our tour took place in early March, during the off-season, and we had the run of the place. It wasn’t long before we hit narrow farm roads lined with low stone walls that wound around small plots of land. The roads in the area generally had a hard, stony surface with a thin coating of gravel.

On Monday morning, I could feel the anticipation in the air; by Wednesday, everyone was at ease and used to riding with one another, and the tour flowed like maple syrup over pancakes. We branched off one day. Pavey took me, MacBride and Pond on a private tour to shoot the photos you see here. With a smaller group, he improvised the route and our ride turned into a freestyle festival that got pretty extreme. We came back duly impressed with the R1200GS and its impressive ABS that successfully tackled some daunting downhills in the Enduro Pro mode.

The Thursday evening night ride into Vilamoura was the highlight of the tour, especially the single-track trail section through the bamboo stands. The pace was notched up and the fun factor reached its peak. By Friday, I really felt as if my riding had improved. Although the distances were not great, the amount of time holding onto the handlebars in such a wide variety of situations – sometimes difficult – really pushed my limits and left me in near-disbelief about what the big BMW could do in off-road conditions. As I packed up the gear and headed for the airport, I couldn’t shake Barraclough’s words out of my head: “If you do one thing in your life, come to ride in Portugal.”

And Pavey’s Portuguese Paradise Tour makes it entirely possible. Gwyn Barraclough is one of those fixtures in motorcycling who has been around longer than nearly anyone else and has seen it all. As a 13-time ISDE (International Six Days Enduro) rider, he has some fascinating stories to tell. Once we started comparing notes, it came up that we had both had ridden the ISDE in Cerdanya, Spain, in 1985. It was my first Six Days event. O

nce I returned home from this trip, I looked through a book I’d recently bought about that very same ISDE. Sure enough, there in the entry list was Barraclough’s name – he was number 253; I was number 255. In one of those strange coincidences, he and I rode on the same minute for six days 35 years ago. Riding with him in Portugal seems to prove that if you stick around long enough, history does repeat itself.