BMW celebrated its 100th anniversary in 2016, and the company held four celebrations globally, revealing four concept vehicles, one for each of its subsidiaries: BMW, Mini, Rolls-Royce and BMW Motorrad. The Vision Next 100 concepts are BMW’s interpretations of the future of mobility in the next century. Perhaps outlandishly styled, these four vehicles represent technologies – existing and future – claimed to make the world safer, more convenient and cleaner for road users. I attended the final such party in Los Angeles, where the BMW Motorrad Vision Next 100 bike was revealed, and its technology will either astonish or frighten you. My emotions lie somewhere in the middle. 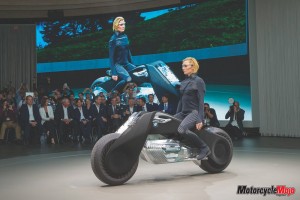 Automakers are currently working on autonomous cars – cars that will be able to drive themselves with minimal or no input from a human, other than to punch in or dictate a destination. The Rolls-Royce Vision Next 100 concept is designed with no front seat and no driver controls whatsoever, not even a futuristic joystick. Carmakers are looking to remove the single-biggest collision-inducing factor from the driving equation: the human. Let’s face it, most collisions are operator induced, so it’s not that farfetched for carmakers to want to remove the operator from the driver’s seat.

And car companies have already begun the extraction. Cars are already equipped with adaptive cruise control that maintains a safe distance behind other vehicles without the driver having to provide any input. Cars can even slow down to a stop in traffic and resume the preset speed once traffic gets moving again, and they can apply the brakes should the driver neglect to do so in an emergency. Lane-keeping functions keep a car within its lane without having to touch the steering wheel, and some cars can even go around bends.

Electric carmaker Tesla leads the way in this self-driving world, with cars that can change lanes autonomously, when they determine it is safe to do so, as soon as a turn signal is triggered when moving. Tesla uses GPS in its cars to predict road conditions, and will automatically set speed limits in urban areas, when configured to do so. 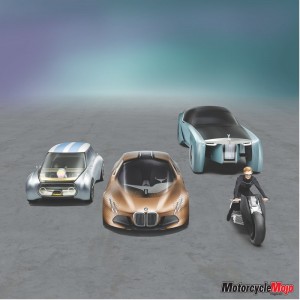 Probably the next biggest such technology to be made commonplace will be connectivity – the ability for vehicles to communicate with one another, receiving and transmitting information about location, traffic conditions and even weather conditions so the cars themselves can adapt to the environment, and take measures in advance to avoid possible collisions if they are deemed a potential threat. If you think you’re immune to this kind of electronic intervention because you ride, well, you should expect to see it on motorcycles in the future, because at least one manufacturer is working on the technology.

BMW Motorrad presented the Vision Next 100 concept bike, a three-dimensional, life-sized interpretation of what the German motorcycle maker sees as the potential future of motorcycling. And its designers are making a very bold statement. Videos of the bike in action feature a helmetless rider wearing a skin-tight body suit. By today’s standards, portraying an improperly attired rider, especially in promotional material, is taboo. But BMW believes its futuristic two-wheeler will be safe enough that its rider won’t need protective riding gear. The Vision Next 100 bike will have several active rider assistance features, including the ability to right itself.

During the presentation, BMW’s concept bike was ridden on stage, and once the rider stopped, she kept her feet on the foot pegs without extending any kind of stand. The futuristic self-balancing bike will use a system of gyroscopes that will not only hold it up when at a stop, but will also assist or enhance handling. BMW has no intention of removing the rider from the riding equation – after all, what would be the point of a riderless bike? However, the company would like to enhance rider safety, which is the ultimate goal of any motorcycle maker. 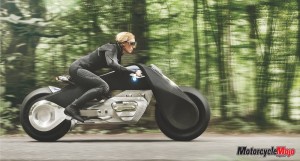 Other safety technologies will be incorporated into the rider’s gear. In BMW’s future, which the company predicts will be close to 30 years rather than 100, motorcycle gear won’t include armour to protect the rider in case of a fall, but will instead include technology to help prevent the fall in the first place. Futuristic riding goggles will provide protection from wind and debris, but they will also provide an interactive head-up display that will include aircraft-like information about the motorcycle’s actual attitude, lean angle and other info in relation to the horizon, and compare that data with a comparative overlay of a suggested line. Should the rider fail to react to the actual situation, the info will be relayed to the bike’s computer, and when combined with the self-balancing technology, the bike will take corrective measures. Yes, folks, this is what the future might hold. Scary stuff. The riding gear itself will either heat or cool depending on the weather, so there will be no need to continually remove or add layers.

Connectivity will also be part of the Vision Next 100’s safety package, connecting the bike, the rider and other road vehicles in a constant flow of information, with the goal of reducing collisions, but also, as demonstrated with the Tesla’s GPS guidance, a measure of auto-adaptability. If the bike senses an upcoming twisty road, it might automatically switch to Sport mode; if there’s a divided highway up ahead, it’ll switch to Comfort mode.

The concept motorcycle’s bodywork seems to hide the suspension components, but in BMW’s futuristic view, the bodywork/frame will act as the suspension, and steering. The one-piece frame on the futuristic bike will extend from the front wheel to the rear, and will flex when steering, reducing the amount of parts needed to build the bike, and subsequently, the weight. Yet-to-be-invented frame materials will be flexible, yet rigid where needed, so the bike’s chassis will actually flex when steering input is introduced into the handlebar; there will be no steering neck, no swingarm pivot – just flexible material articulating in response to rider input and road conditions. At least, that’s what BMW fortune tellers are hoping.

One common theme among the four concepts showcased by BMW, as well as other concept vehicles presented by other manufacturers, is the choice of powertrain. All four Vision Next 100 concepts feature alternative fuel power sources. The exact type of energy source is yet to be determined – more likely, yet to be invented – but one thing is for sure: it will not be gasoline.

Gasoline has become today’s tobacco; it’s not regarded as safe or clean, and it’s getting a bad wrap among the younger generation, who are the ones that will be shaping the future of transportation. Fortunately for us, BMW admitted that motorcycles will be among the last vehicles to lose gasoline propulsion, so we’ve still got some time to go out there and make some internal combustion noise.

If you balk at some of this new technology, the reality is that many people just aren’t trustworthy of the responsibility of operating a vehicle, so it’s inevitable. And don’t forget, people initially resisted ABS and traction control, both of which are becoming more and more prevalent on two-wheelers. It’s highly unlikely that the BMW Vision Next 100 motorcycle will ever be produced, at least not as it was presented in Los Angeles. However, you should expect to see at least some of these futuristic technologies on production motorcycles in the not-too-distant future. Frightening or not.