The Motor Company blends old and new, hoping to strike the right balance

It’s hard to ignore the elegant simplicity of an air-cooled engine, or the unique sensory assault that comes along with whacking the throttle open on one. Those traits have certainly not been lost on the long list of owners who’ve developed an attachment to the various generations of air-heads over the years, and who continue to let the Motor Company know exactly what they want from the next generation of bikes. It’s no wonder Harley-Davidson has spent so much time engineering modern solutions for this age-old design. I suppose then, there’s great irony in the fact that I’m testing a 2017 Road Glide Special, packed full of electronics and amenities, yet the big news is that the all-new V-twin still has cooling fins.

The brand-new Milwaukee-Eight family of engines is the ninth big-twin platform created by Harley-Davidson, and it exemplifies its commitment to maintaining long-standing traditions and keeping loyal customers happy. 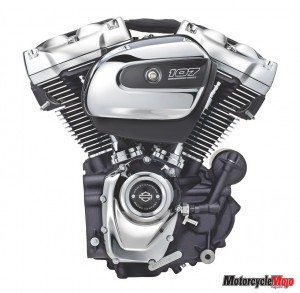 This all-new family of powerplants is available in three flavours: First up, and featured here in this test, is the 107 big twin air/oil-cooled variant, which will power the Street Glide/Street Glide Special, Road Glide/Road Glide Special, Electra Glide Ultra Classic, Road King and Freewheeler models. The Twin-Cooled 107 (liquid-cooled and air/oil-cooled) option, with its two front-mounted radiators, will power the Ultra Limited models, Road Glide Ultra and Tri Glide models. The third option is the Twin-Cooled Milwaukee-Eight 114 big twin that can be found in the CVO Limited and CVO Street Glide models. All the powerplants have been designed with an emphasis on heat management, while still retaining the finned cylinder heads and uncluttered appearance of a classic Harley mill.

The 107 ci engine in the Road Glide Special is said to deliver 10 percent more torque than its predecessor, and much of that is thanks to the new eight-valve layout, with those four additional valves netting a 50 percent increase in intake and exhaust flow capacity. Each cylinder is now home to two sparkplugs, ensuring efficient ignition in the shallow combustion chamber, which differs greatly from the hemispherical two-valve chamber in the Twin Cam engine. The combination presents the least amount of surface area for heat to penetrate into vital engine components. The area of greatest concern for heat buildup in this motor is the bridge between the two exhaust valves on each head, where hot gases leaving the combustion chamber heat a very small area from both sides. Engineers have dealt with this by circulating oil through the bridge and back out of the head and into a small chin-mounted radiator. The “strategic” oil cooling in the heads solves the heat issue to some extent, because the engine definitely runs cooler than previous generations. 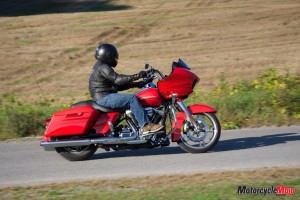 A single chain-driven, four-lobe camshaft and traditional 45-degree architecture is not what we’d call groundbreaking, but again, the simplicity of the design has its benefits – one being fewer moving parts, another being less mechanical noise in the drivetrain. And they weren’t kidding: there’s a lot less valve-train noise compared with the Twin Cam or the previous Evolution engines.

Power from the Milwaukee-Eight engine is ample, without being intimidating, and is well suited to two-up touring or blasting from stoplight to stoplight. What was most notable, however, is the way it manages to settle into that Harley lope at idle and then make it completely disappear once on the move; I repeatedly marvelled at that fact, and it doesn’t matter what speed you’re going, either – if the wheels are turning, the Road Glide’s ride is velvet smooth. During development of the Milwaukee-Eight, engineers tested a counterbalancer that eliminated 100 percent of the engine’s vibration; however, testers rejected it because it lacked the proper Harley “feel.” In the end, they settled on a counterbalancer that eliminates only 75 percent of engine vibration.

Having recently tested the Low Rider S and its Screamin’ Eagle 110, I was surprised at…