As important as earth is in supporting life, for plenty of motorcyclists, it has played another critical role – many riders got their first taste of powered two-wheel freedom riding on dirt.
Take, for example, Hans Christensen of Calgary. He and his brother, Soren, grew up on a farm near Lethbridge, Alta. In the early 1970s, dirtbikes figured prominently in their youth as they tore around the family property. Eventually, the boys gained enough experience to become quite competitive in organized motocross races aboard 125 cc and 250 cc Husqvarna machines.

But when Christensen’s two young sons entered the picture, he quit the racing scene and sold all the dirtbikes. It wasn’t long, however, before Adam and Jason were listening to Dad telling stories about dirtbiking. Plus, they’d often travel to the family farm, where there were still a couple of bikes. Not surprisingly, the two siblings soon expressed an interest in riding.

A New Generation of Riders 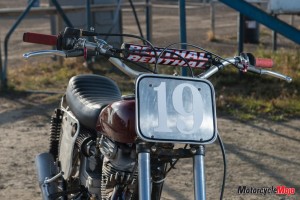 “In the mid- to late 1990s, [Adam and Jason] had Japanese dirtbikes and I had a KTM to chase them around,” Christensen says. At that time, the family was living in California and there were some good off-road riding areas where they could get out and hit the trails.
Then, in 2001, after moving back to Calgary, the Christensens took up motocross racing, participating in events at Wildrose MX Park and other tracks in Alberta.
“It was just the competition that was fun, and the boys did well in some of their events,” Christensen says. “But then we got interested in vintage-class racing. I’d always really liked the old stuff, and a fellow I worked with was into vintage racing and I think that filtered through to me.”

The three of them joined the Vintage MX Alberta club, a group of off-road enthusiasts hosting race events around the province. According to its website, the club has seven machine classifications, with enough diversity to accommodate just about every motocrosser that was manufactured prior to 1990.
Christensen picked up pretty much where he’d left off, acquiring a few 1970s-era Husqvarna two-stroke dirtbikes. His youngest son, Jason, however, was interested in old four-strokes, as he’d seen Steen Hansen competing aboard his BSA Gold Star. The single-cylinder overhead-valve British racing machine made an impression, and Jason started searching for a similar motorcycle to campaign. 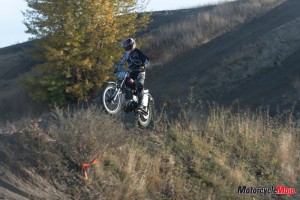 What he found for sale south of Seattle was a circa 1953 Matchless G80CS. The Christensens talked to the seller via phone, looked at a few pictures and bought the Matchless without actually seeing it in person. The motorcycle was shipped to the Montana/Alberta border, and that’s where they picked it up.
The Matchless G80CS (C for Competition and S for Spring frame) model is a machine that can trace its lineage to 1935 and pre-Second World War motorcycle production of the G3 model.

After the war, Matchless offered the G3L, a 348 cc single; and the 497 cc G80. Stroke in both engines was the same, at 93 mm, but the larger-capacity powerplant had a bore of 82.5 mm. Overhead valves were operated by pushrods, and the four-speed right-foot shift Burman gearbox was separate from the crankcase. Dry-sump lubrication saw oil carried in a right-hand-side oil tank.

Matchless added the Competition, or C, models to the range in 1946, and rear suspension was added in 1949 to the road-going machines. In 1950, the engine received an all-alloy top end, and then the following year, the rugged G80C became the G80CS with the addition of the rear swingarm. Ignition was by Lucas magneto, which in 1952 moved from behind the cylinder to in front, and the carburetor was a
1-3/32-inch Amal. 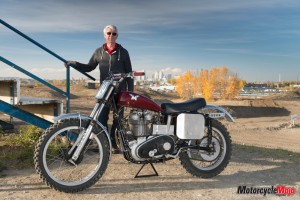 As purchased, the Christensens’ circa 1953 Matchless had been set up by the previous owner for flat-track racing. That included the low-level exhaust and a small fibreglass fuel tank. The rear wheel is thought be from a Bultaco, while the 35 mm forks were made by Metal Profiles. Better known as MP, Metal Profiles was a precision engineering firm that supplied lightweight telescopic forks to many manufacturers in the British motorcycle industry. The front hub is from a Suzuki TM400.

With fluids checked and gas in the tank, it didn’t take Christensen long to work out the starting drill. But after a few laps around the motocross track, it became apparent some changes were necessary. First, the oil tank mounts cracked. Christensen cut and formed from aluminum a new tank to sit above the rear engine mounting plates, and had a local welding shop run the beads to hold it together.

The seat needed to be changed, and the one now on the bike was originally at home on a Hodaka. To give the Matchless better bump-absorption abilities, rear shocks were upgraded to units from Progressive Suspension and the fork springs were changed. Modern cross-braced handlebars were also installed.
“The intent was, Jason was going to use the Matchless,” Christensen says. “But then he found a 1960 Jawa, and I bought the Matchless off him so he could afford the Jawa.”

Christensen had the top end off the big single-cylinder engine after his first season and discovered a valve had been making contact with the piston. He rectified all this, and says the Matchless has been relatively bulletproof and very reliable with a Mikuni carburetor on the intake manifold.

After finding an aluminum primary chain case at the Millarville Vintage Motorcycle Swap Meet, Christensen plans to replace the pressed-steel case currently on the Matchless. While the primary drive side is apart, the clutch will also be upgraded.

“It’s a hodgepodge of Matchless parts that functions very well,” Christensen says of the 500 cc motocrosser, adding that it “weighs about 350 pounds, and it’s heavy on the track. But it’s not a bad-handling bike – it corners well and it doesn’t mind traversing the rough stuff.”

He does, however, point out a downside: “What gives me the fits are the reversed foot controls, with the right-side foot shifter and the left-side brake. Many times I’ve pressed on the shifter expecting to slow down, but that only engages a higher gear. On a track, that’s not what you want to be doing!”

Also in the Stable

The Matchless is just one of a fleet of vintage motocross racers campaigned by the Christensen family. As alluded to, they also run a 1960 Jawa Metisse, plus a 1971 Husqvarna 250 eight-speed, a 1973 Husqvarna 125, a 1974 Husqvarna 125, a 1978 Honda CR250, a 1979 Honda CR125 and a 1981 Husqvarna 125.
Even with all those other bikes in the stable, Christensen remains impressed by the Matchless. He says, “It’s a great machine. It always starts, always goes out and makes its motos, and always makes it back to the pits. I haven’t even adjusted the points since we’ve had it.”