Texas: hot, flat, dusty, uninteresting roads, not at the top of my list to ride – how wrong can one be? Deep in the heart of Texas, between Austin and San Antonio, and running some 322 km west is the Texas Hill Country, a bucolic, rugged terrain with wooded canyons, towering mountains, mind-blowing scenery and endless winding paved roads with speed limits we can only dream of. One year ago, I was here in a car and I determined that I must come back with my motorcycle.

In the mid-1800s, a German exodus led to more than 20,000 people settling here, and today it’s still referred to by the old-timers as the German Hill Country. The town of Fredericksburg, in the very heart of Hill Country, and nearby towns Bulverde, New Braunfels, Boerne, Walburg and Luckenbach all derive their names from the old country. Around 1850, Baron Otfried Hans von Meusebach founded New Braunfels, followed by Fredericksburg. The Inn on Baron’s Creek in Fredericksburg derives its name from the baron himself and is our home for some late-March riding. Lined with galleries, boutiques, wineries, breweries and German restaurants, Fredericksburg’s Main Street is a mix of Tex-Mex-Deutsch. 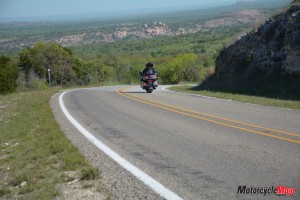 The morning is perfect as Tina, Hank and I rendezvous with our friends Rich and Liz at their RV site. Leaving town on State Road 16, we follow the wandering Pedernales River to Kerrville. From here, the Junction Highway follows the Guadalupe River as it twists and turns and tumbles its way southward. High limestone cliffs make great diving platforms above the emerald-green waters, and the cypress-lined riverbanks complete the Monet-esque tableau before us. Rounding a bend, a long fencerow with a cowboy boot atop each post reminds me of the shoe trees often seen in Ontario.

Texas 83 runs us south to Leakey, where we pick up Ranch Road 337, the first of the “Three Sisters.” These three famous – or for some, infamous – roads, Texas Ranch Roads 335, 336 and 337, are the most renowned bike roads in the Hill Country, or maybe all of Texas. A sign warns that 10 motorcyclists have died here since 2006, and with a high population of deer and free-range cattle, I understand why.

The flatlands thread their way into canyons and then back again, and as I glance down at the pavement blurring by, I notice its coarse, granular surface. Fantastic traction, but don’t fall off: this is like coarse-grit sandpaper and would peel a rider like a ripe orange. 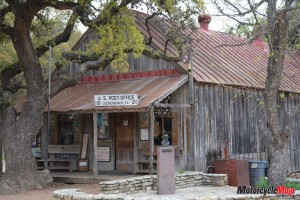 In Camp Wood, I’m ready for a Texas smoked beef brisket sandwich, so we look for Two Fat Boys BBQ, where I stopped last year, but it’s gone. Disappointed, we wander through town and, suddenly, there it is, Two Fat Boys, at a new location. But we are disappointed yet again; it’s closed today. As we wonder what to do, a friendly lady appears out of nowhere, and then Chug, one of the “Fat Boys,” strolls out from behind the restaurant. “Y’all shouda ben here on the weeken,” Chug says. “Wur closed on Mundees. The Chicken Coop café just up the road in Barksdale is open.” So we head up Twisted Sister number two, RR 335, and settle for chicken. But the homemade buttermilk pie at the Chicken Coop more than makes up for missing out on Chug’s offerings.

As we motor along at a brisk pace, gated entrances to regal Texas ranches blur by on our way into Nueces Canyon. With the sweeping curves, powdery white limestone cliffs rise up on one side and expansive panoramas stretch for kilometres across the valley, making it hard to concentrate on the riding at hand. I imagine more than one rider has succumbed to this bewitching scenery. 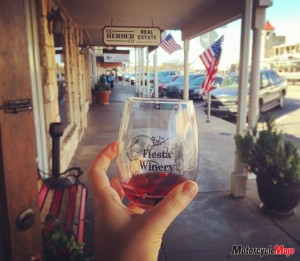 At Texas 41, we go east a couple of kilometres and then catch Sister 336 south. The Angus range cattle have little interest in us as we guardedly make our way past these docile bovine beasts. The occasional sound of a cattle grid is a constant reminder that these warm-blooded mammals are imminent, roving roadblocks. Again, the road rises upward from the valley floor and begins its sinuous pathway threading through the hills. Enjoyable for me, but not so much for Tina, as I hear a gasp through our intercom. We settle on a mutually agreeable pace, but I can’t help feel that it’s a shame to waste such good corners.

Leaning hard, my shoulder close to the cliff, we emerge from the apex of a magnificent high-speed right-hander, and as we straighten up, I spot a man frantically waving his arms beside a huge broken-down truck blocking our lane. Adrenaline rises as I squeeze hard on the brakes, my tires squishing against the hot sandpaper surface. Hastily checking for oncoming traffic, I warily pass by the truck. My heart rate finally returns to normal, but I’m reminded of that caution sign a few kilometres back. 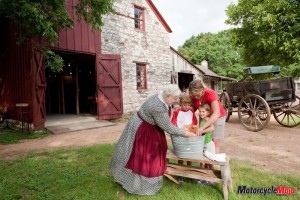 Rolling down from the hills over the last cattle grid and onto flat land, the Sisters diminish as we burn along 83 and then 41, where the 75 mph speed limit quickly ticks away the kilometres. Long stretches of tall fence on either side leave us wondering why, until we see antelope, deer, buffalo and a sign telling of an exotic pay-to-hunt farm.

It’s been a good day, and back in Fredericksburg, an authentic German meal at the Rathskeller Restaurant, located in the basement and former morgue of the historic Keidel Memorial Hospital. The setting gives us the perfect backdrop to reflect on the day’s ride over dinner before retiring for the night.
The next morning, just east of town, Ranch Road 1376 brings us to a tiny sign at the side of the road. We are in Luckenbach, population 3. Made famous by Waylon Jennings and Willie Nelson, Luckenbach is named after founder Jacob Luckenbach, who came here in 1830; it’s more of a place than it is a town. As is said, “Many people come here expecting Fiesta Texas and instead find Siesta Texas.” Luckenbach has reinvented itself from an Indian trading post to a post office and now a general store selling memorabilia. On any given evening musicians play here, and you can simply listen, join in or dance. Behind the general store, a small stage backs onto Grape Creek, but more often than not, musicians sit and play on an old wooden bench between a couple of spreading oak trees. And as the sign says, “Everybody is somebody in Luckenbach.”

A few kilometres from Luckenbach, bypassing Blanco, we find Ranch to Market Road 32, the Devil’s Backbone. Ghost stories abound about this scenic ridge and especially at the Devil’s Backbone Tavern. A sign on the wall says: “Old Ghost Warning: If doors and windows open and close by themselves, and you hear strange noises, just ignore it. It is just our ghost trying to get attention. He thinks it’s funny.” The room is filled with cigarette smoke from local characters playing cards at a table and the ceiling is covered with dollar bills. This is a breeding ground for tall tales and consumption; or maybe it is consumption first and then tall tales. No food here, and it’s midday, so we follow the ridge down into Wimberley for lunch at the Cypress Creek Cafe. Afterwards, we find Purgatory Road, and as we turn onto Farm to Market 306, a massive grass-covered tiered hill rises up on our right, the mighty Canyon Dam. At 2,080 metres long and 68 metres high, the dam was built by the Army Corps of Engineers to control flooding on the Guadalupe River.

Here, at the Canyon Lake Spillway, we catch River Road, a spectacular road following the Guadalupe River. Lined with cypress trees, the Guadalupe is a recreational paradise, an angler’s and cottage-goer’s dream, and with a road that has few straight sections, a 32 km motorcycling utopia. Steel Wheels and Four Legs At New Braunfels, the Hueco Springs Loop Road swings us west to Texas 46, and just after 4 p.m., we arrive in the “Cowboy Capital of the World,” Bandera. Saddled horses at hitching rails wait patiently for their riders right next to a line of parked motorcycles.

Over dinner at the Old Spanish Trail Restaurant, with bar stools made from real saddles and a “John Wayne Room,” we learn of the early days when Bandera was a feeder to the Old Spanish Trail. It’s said that the buffalo were so bountiful back then that a pair of cowboys had to wait for two days for a herd to pass so they could move on. Bandera is a typical western-movie-set town boasting some of the largest motorcycle events in Texas: Thunder in the Hill Country, Rumble on the River and the Oilman’s Hill Country Ride, to name just a few. On some weekends, the town is packed with steel horses. When we leave the restaurant at dusk as the drizzle begins, I’m faced with two of my greatest negatives, riding in the rain and riding after dark. The deer population of Texas is unrivalled and I don’t want one sprawled across my windshield, so we take it easy and finally arrive safely back in Fredericksburg at twilight.

Our last day dawns bright and warm as we wind northward along Ranch Road 965.

The roadway is lined with bluebonnets and Indian paintbrush, just two of the many Texas wildflowers that adorn the highways. Ladybird Johnson, President Lyndon B. Johnson’s wife, had all the medians in the area seeded with wildflowers. LBJ was just one famous citizen of this area, another being Admiral Chester Nimitz, Commander of the Pacific Fleet during the Second World War. Born to the daughter of a butcher, he grew up to command the largest naval armada in the history of the world. Sweeping downward through a curving limestone rock cut, a huge, pink granite monolith commands the horizon: Enchanted Rock. Originally, the native Commanche and Apache Indians called it “Spirit Song Rock” because of its groaning and creaking noises.

These nighttime noises come from the rock contracting after being heated by the sun. Tiny, moving ant-like specks on its smooth surface are people climbing its 133 vertical metres to the summit for a spectacular view of the Hill Country. The roadside is an emblazoned wash of blue as we ride south to the Willow City Loop, a private road that gets us up close to the wilds and wildlife of Texas. Twenty-one kilometres of second-and third-gear riding wind us through the rugged hills and valleys filled with sagebrush and scrub trees, indicative of the harsh, dry climate.

Cattle grids again remind us to watch for free-range cattle. After a right down 281, we are in Johnson City, the boyhood home of LBJ, America’s 36th president, and his so-called Texas Whitehouse, which is a popular tourist attraction. Lunch today is Texas smoked beef brisket in Driftwood at the Salt Lick BBQ, made famous on television’s Food Channel. Texas smoked beef brisket and another exciting day of riding in the Hill Country. Friendly people, amazing food, hilly country, crooked roads and perfect weather – how wrong could I have been? Texas is now right at the top of my places to ride.