Growing up, I was fascinated by the hyper-masculine motorcycle culture: Evel Knieval, after all, was my neighbour’s cousin. Though I never did personally meet the daredevil as a kid, he was the closest connection I had to a celebrity – an association I was sure added to my “cool” factor.

But today, with my 50th birthday approaching, what’s “cool” and curious is the growing number of female friends and acquaintances who are taking up riding in their 40s, 50s and over. So I decided to dig deep to understand what is driving women at these stages in their lives to step into the motorcycle scene, a culture traditionally associated with masculinity and rich with highly exaggerated gender stereotypes. Or is it that these female riders are in fact driving an agenda? Perhaps it’s both.

To find the answer, I interviewed three women: Debra Muir, Brenda Yamkowy and Kim Hicks from the Grande Prairie area in northwestern Alberta. Muir and Hicks are new riders; Yamkowy is a seasoned biker of 17 years. All three are professionals, are married with grown kids, are in or near their 50s and own their own bikes. And while none of the women is a stranger to adventure (Muir is a mountain-biker, Yamkowy hikes and backpacks the globe and Hicks backcountry quads), it’s clear that not only does riding a motorbike provide a sense of pride, but also a sense of empowerment. 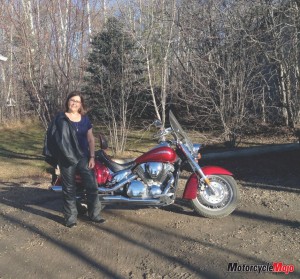 “I feel empowered by doing something I was too scared to do,” Hicks says. “It’s really not about what others think of me, but what I think about myself.” Interestingly, all the women spoke of concerns around safety; yet it was their fear, or rather conquering that fear, that was part of the attraction to biking. And a transition in life to empty nesters was part of the motivation. “When the kids were young, I made sure I kept myself safe,” Muir says. “Now my kids are independent, and I want them to think of their mom as someone who is not afraid to take on new challenges, not someone sitting at home making pies.”

Yamkowy, who recently completed a graduate degree, also spoke of resisting stereotypes about gender and aging. “I never wanted to settle and be a housewife,” she says. “I’m always trying to be better, to look for the next challenge.” 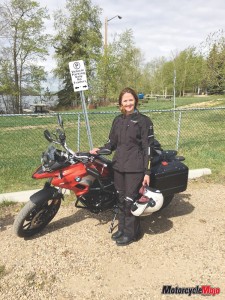 What is apparent is how each woman values family, and how riding served as a catalyst to redefine themselves as mothers and wives. All three seized the opportunity to become role models for their kids – ironic, considering two of them said they never would have allowed their kids to ride a motorbike before they were adults. And all three concur that riding is a way to connect with their spouses.

Hicks reflects on this new stage in her marriage: “It’s a time in our lives when we can afford to buy bikes and see more and do more that isn’t about the kids.” Says Muir: “Brian and I are at an age where we need to find hobbies, and this is something we can do as a couple.” Yamkowy, who has ridden her bike around Canada and as far south as Sturgis, South Dakota, says that getting a bike just made sense: “My husband loved riding and I wanted to be able to spend time with him.”

As I chatted with the women, it was obvious that riding their own bike is their way of maintaining control while participating in what they consider a risky activity. These women, with…