In 1969, I left the world of roads and flew to the Arctic in an old DC-3 on skis. I landed in Cambridge Bay, a hamlet on Victoria Island in Canada’s western Arctic populated mostly by Inuit, as well as a fair number of “southerners” at the Dew Line site, airport and a few contracting businesses. For a 20-year-old guy who liked bikes, I thought my three-year stint “Up North” would bring some cool experience, but, alas, with a regrettable deprivation of the two-wheel kind. Cambridge was a fly-in community, but I found that there were at least 20 km of gravel and dirt roads.

My buddy Neil and I learned that one of the airport guys had a Suzuki 80 street bike for sale, perhaps a 1967 model (no registration or plates were necessary then). I can’t remember much about the bike, but it had a kick-start and it was two-stroke, so it was pretty simple overall. We rode that bike to the Dew Line bar, up dirt roads to the river and a fishing lake, all around town (and at least once through the community hall at a Saturday night dance). We rode it in the winter, too, across the newly frozen bay in front of our house to jig for fish, and we could see them moving under the tires. We had paid something like $300 for the bike and definitely got our money’s worth. I sold my share to my replacement when I transferred to Gjoa Haven on King William Land, which is near the spot where Sir John Franklin’s ships Erebus and Terror were finally discovered at the bottom of the ocean. 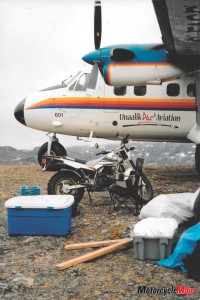 I left the north in 1972 to return to university in Ontario, and at that time I was blessed to own a Honda CB350, followed by a new 1974 Honda 750-4. Lots of roads and a few speeding tickets in those days.
Having finished my degree, I was back Up North – seemed as if I couldn’t stay away. I landed in Resolute Bay on Cornwallis Island as manager of the local Inuit cooperative. Resolute is the second-most northerly community in Canada, which means long, dark and cold winters. The summers are short and give some relief, but it never really gets warm. I had a sweatshirt that read, “Resolute Bay: North of Summer.” Having said all that, one day I happened to notice an ad in the current Playboy magazine that was making the rounds. There was a beautiful colour spread of a 1978 Yamaha XS650 Special, a candy-apple red twin with chrome fenders. I drooled over that magazine in a way I never drooled over it before, and in less than two weeks, I had that bike delivered to me on a chartered DC-4 from Edmonton.

Tough Life for an XS 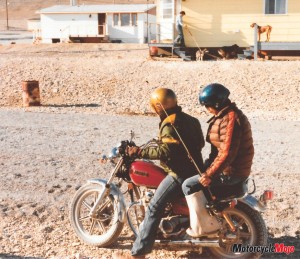 Resolute had about 15 km of road, most of it between the Inuit community and the “upper base,” consisting of the airport and business/contracting nexus. That bike in that place made me a bit of a laughing stock with some of the upper base folks, but I didn’t give a hoot. The Yamaha, the most northerly 650 street bike in Canada for sure, gave me a lot of psychological satisfaction for a short part of the year.

Though it was a street bike and I wore grooves in all the well-gravelled road surfaces, it also made some trips over some pretty rough terrain and some spongy tundra to a fishing lake. The bike rarely got beyond third gear. After a year in Resolute, the bike (and my dog) went south with brother Mike while I relocated to Grise Fiord on Ellesmere Island, most northern Canadian community, with a population of 90 and perhaps only 5 km of road. Mike and our youngest brother, Randy, used that Yamaha 650 Special for well over 10 years.

Fast-forward to Frobisher Bay, on Baffin Island in the eastern Arctic. I was again back Up North, and I stayed in that one place long enough to see the community’s name change from Frobisher Bay to Iqaluit (“Place of Fish”) in 1987, and the territory split from the Northwest Territories to become Nunavut Territory in 1999. As the capital of Nunavut, the city grew and accumulated more roads along the way. Perhaps the total kilometre value of the roads mushroomed to 30, including the “Road to Nowhere,” and the road to the abandoned Dew Line Station and to the dump. I was finally below the Arctic Circle again (just barely), so summers were relatively long and sweet. In Iqaluit, we got over three months of decent weather for motorbiking, compared to hardly two months in Cambridge Bay and Resolute Bay. I have to add that the seasons may have been short compared to southern Canada, but the near 24-hour daylight sure helped to take the pain away. 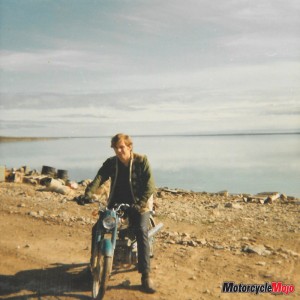 What did I do? I got a TW200 Yamaha shipped up from Ottawa, and so did my buddy Dave. That bike, a four-stroke with big tires, was perfect for Iqaluit, as far as two-wheelers go anyway. Most Inuit and Qallunaat (southerners) actually ride quads up there, useful around town and on the land for fishing and hunting. But, some of us like the two wheels. I rode the usual grooves into the gravel roads. Some of the roads, thanks to Iqaluit’s capital status, were even paved! Riding to the Sylvia Grinnell River and up to the old Dew Line site were favourite rides. It was a hoot and the bike never let me down. My daughter, Jean, wearing a sealskin riding jacket, took her road test for her bike licence in Iqaluit on the rider-friendly TW200.

One thing about a two-wheeler: It’s easy to throw it into a boat or even an airplane to go fishing. You can carry a tub of Arctic char on the back rack, or even a caribou. On one particular fly-in fishing trip to York Sound from Iqaluit, I used the TW200 to do some armed patrols of our tenting area just up from the coast. The area was thick with polar bears and we always had to have a rifle within reach. We had high-
voltage electric wire strung around our tents, and we had our valiant little dog, Cujo, to yap if any intruders came around (valiant but reluctant to sleep outside the tent).

I have been out of the Far North now for more than a decade. I hear that Iqaluit now has four TW200s there, a handful of other dirtbikes up to 250 cc,
a KLR 650, and even a couple of Harleys, the last of which are pretty much limited to the four kilometres of paved road. Motorcycles in Nunavut run the gamut from being practical to being the fruit of unrequited two-wheel passion and foiled touring dreams fuelled by long winters of 24-hour darkness. There’s no one easy answer to the question, “Why?” So better not to even ask it.