Canada to Cuba on Two Wheels

While it isn’t impossible to take your bike to Cuba, it certainly isn’t easy. But this intrepid traveller has found a way

Story and Photos by Larry Simpson

My Cuba journey is already six weeks old by the time I have ridden from Nova Scotia through the United States to Mexico’s Yucatan Peninsula. It’s pretty much a blur now, yet there are some indelible memories of the U.S. southwest and the west coast of Mexico, some of the latter being mixed with the dark side of things, including endless speed bumps and drug cartel shoot-outs along my route. As always, we filter out the bad and keep the good – the serendipitous encounters and experiences that dot the journey. 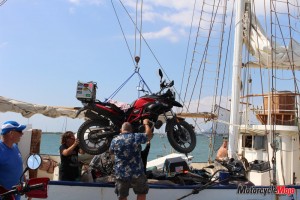 Near Cancun, my bike and I board the sailboat Stahlratte, my mission being to experience Cuba by motorcycle before it is overwhelmed by a projected four million American tourists per year as the U.S. trade embargo unwinds.

From the port city of Cienfuegos, my exasperation with two days of bureaucratic inefficiency soon fades and, legitimized with a Cuban licence plate, I point my front wheel toward Santiago at the southeast end of Cuba, the second city after Havana and my favourite. I have good friends there, having been to Cuba many times and travelled by rented car and bicycle, bus, train and even by thumb. But now I’m here on my own motorcycle! The Pope is gone, President Obama is visiting and the Rolling Stones are arriving next week. I feel connected to history in the making.

For Richer or Poorer 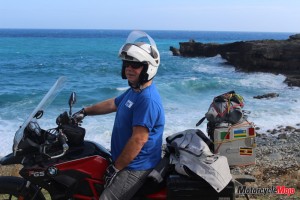 My first waypoint is Trinidad, famed for its UNESCO-recognized heritage and its cobbled streets with horse-drawn carriages. The twisty road through the mountains is as therapeutic as the brief stop. Heading south beyond Sancti Spiritus, I literally come to the end of the road and have to hit my brakes at those coordinates where the Russian subsidies dried up. I take secondary roads through small towns and cities that do not have bypasses and continue to Bayamo to spend the night in a casa particular (like our B&Bs), where prices are up 30 per cent over the last two years. I see that the trend of owners of casas particulares and paladares (private restaurants), not to mention taxi drivers and hookers, making much more money than state-paid doctors and teachers has only accelerated. Those paid by the state in the old Cuban pesos struggle, while those with access to CUCs – the convertible pesos pegged by the U.S. dollar and used by tourists and upper-class Cubans (yes, access to CUC defines class now) who work in tourism (hence tips) and those who receive remittances from family in the U.S., mostly Miami (Little Havana) – rush into the consumer frenzy for cellphones, electric scooters and Miami fashions in government-owned “dollar stores.”

I am thrilled as Santiago’s rugged urban charm fills up my visor and hammers me with nostalgia. This has to be one of the best places in the world, rivalling even Cape Town, to sweep out of the mountains and arrive at on two wheels. Santiago is the most Caribbean city in Cuba, known as the origin of Son music, and heralded as a heroic city by Fidel Castro. 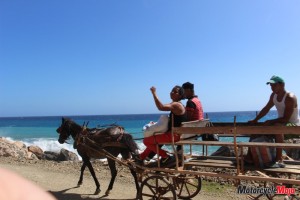 My good friends Andres, an electrical engineer, and his wife, Asela, an actress, are both state employees. When I take them out and buy them dinner and beer at 1 CUC a bottle for the potent Bucanero beer, this is a treat they cannot afford on their combined monthly state salary, equal to 40 CUC a month. Out on the town, I see cellphones and laptops everywhere in new Wi-Fi hotspots in reinvented public squares. People are dressing fashionably and are eating better, too, not as thin as they were 20 years ago when circumstances had them eating less and walking more.

After a couple of days of reminiscing with friends and pondering the changes sweeping Cuba, it’s time to move on. While relaxed “Cuba time” predominates, the clock on the Stahlratte is nevertheless ticking away on my three-week stay. Andres wants to join me for the first leg of my trip, westward to Pilon on the enchanting coast road sandwiched between the Sierra Maestra Mountains and the blue Caribbean. This road is my favourite in all of Cuba, but this time I will take a long-anticipated turn northeast into the mountains on an elusive dirt road that is impassable for a good part of the year. This route is a challenge for a solo rider on a bike with off-road capability, more so with a passenger.
The road gets wilder as we head west, and…