“Be there, don’t just get there,” says adventure motorcycle rider Oliver Solaro of the northern grandeur that is the Yukon and of time spent on one of its most famous roads, the Dempster Highway.
“I’m not kidding,” Solaro continues. “There is actual physical nourishment in the air up there. It’s such an experience. It’s very difficult to fully take in the beauty and incredibleness of the Dempster Highway and the surrounding scenery, and whether you do it by ATV, car, motorcycle or bicycle, you have to stop frequently – don’t try to just add on the miles. You’ll be doing yourself a disservice.”

It’s one of the must-ride roads for any adventure rider, and also this month’s Legend – the Yukon’s Dempster Highway.
“It’s already a super road,” Dick Van Nostrand of Dawson City, Y.T., says of the Dempster, as it connects his city to Inuvik in the Northwest Territories. “But, it’s going to become the go-to destination of the world for adventure riders once the road is completed to Tuktoyaktuk. Once that’s through, you’ll be able to dip a wheel in the ocean at Tierra del Fuego in South America, ride north, and dip a wheel in at Tuktoyaktuk, or vice versa.” 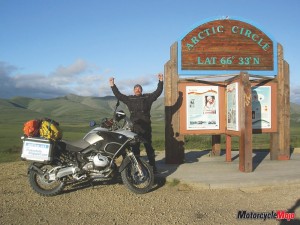 Construction on the Dempster extension from Inuvik to Tuktoyaktuk began in early 2014, and gravel crews working in each direction met in the middle in April 2016. There’s plenty more work yet to do, but it’s expected to open in the fall of 2017.
According to the YukonInfo website, the Dempster Highway is steeped in history, and was named after William John (Jack) Duncan Dempster of the North-West Mounted Police, who served in the area from the late 1890s to the early 1930s. The highway was originally a river-based trade route used by the Gwich’in First Nations, and Dempster would have learned the course from them. He then travelled the frozen ribbons of water via dog sled to cover the distance between Dawson City and Fort McPherson to the north.

Fast-forward to the mid-1950s. While it was the lure of gold that first brought prospectors to the Yukon, it was the quest for other resources – mainly oil – that fuelled further development. Canada’s prime minister in 1958 was John Diefenbaker, and it was his Conservative government that put a priority on constructing a road system in the Yukon, which became known as “Roads to Resources.”
After a route for an all-weather road had been selected, the bulldozers and graders arrived. However, between the years 1959 and 1963, only 116 kilometres of the road had been built, and when an expected oil boom at Eagle Plains became a bust, further construction of the 7.5-metre wide road was halted. Officially called Yukon Territorial Road No. 11, it was dubbed “the Road to Nowhere.”

Nothing changed until the early 1970s, when word of an oil pipeline in the Mackenzie Valley reinvigorated what would eventually become known as the Dempster Highway. Construction picked up where it had left off, and the road was finished in 1978. It wasn’t until August 18, 1979, that an official opening and dedication ceremony took place. Thanks to a committed group of Yukon residents who lobbied the government, the road was named after Jack Dempster.
A brass plaque, unveiled on opening day, states: “Dempster Highway. The first Canadian highway to cross the Arctic Circle linking Southern Canada and Arctic Canada.” It’s a 737 km-long two-lane highway that sits atop a gravel berm that varies from 1.2 to 2.4 metres thick. The berm protects the permafrost in the ground under the road, thus preventing the highway from sinking into the tundra. The Dempster joins the North Klondike Highway near Dawson City, and snakes its way north to Eagle Plains, and on to Fort McPherson in the Northwest Territories before connecting to the Mackenzie Highway, ultimately ending in Inuvik. 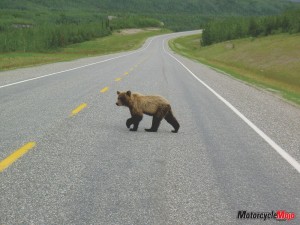 A travelogue published by the Yukon and Northwest Territories governments says, “Where does ‘north’ begin and what is it like? Perhaps the answers lie along the Dempster Highway. This is the only road in Canada that takes you across the Arctic Circle and into the land of the midnight sun, where north is a way of life, not just an arrow on a map.

“The Dempster leads you into a unique landscape, passing through land that until 190 million years ago was the coastline of ancestral North America. It takes you through the lands of the Hän, Gwich’in and Inuvialuit peoples. It introduces you to the winter habitat of the Porcupine Caribou herd. And it takes you across a portion of Eastern Beringia – the vast refuge that escaped continental glaciation during the last ice age.”
Only the first 8 km of the south end of the Dempster is paved; the rest is an all-gravel surface. And it pays to be prepared if planning to ride the highway.
“I left knowing nothing of the road,” Solaro says. “I made it there and back, but the best message I can pass along is to absolutely plan ahead.”
In 2006, Solaro left Caledon, Ont., riding a brand new BMW R1200GS Adventure. There was less than 2,000 km on the odometer, and he travelled west to spend time riding around the Prairies before heading north to Dawson City – arriving there in time for the Dawson City Music Festival, held annually in late July.
Had he rolled into Dawson City in mid-June, Solaro would have encountered the Dust 2 Dawson (D2D) Motorcycle Ride (Not a Rally!) event. The ride began in 1992, when four riders showed up in Dawson City and vowed to make it an annual pilgrimage. That’s when Van Nostrand, who owned the Downtown Hotel at the time and himself a motorcycle enthusiast, began to coordinate with Dawson City officials on a variety of riding events.

“I was in awe of these adventure riders, and I was also a little jealous of them having that kind of ride and thought this could be the basis for others going further, too,” Van Nostrand says. “It went from four to eight to 12 riders, but once the Internet got going, word about D2D rapidly spread.”
For Dempster Highway Adventure Motorcycle Research, a 78-page paper published in June 2015, researchers conducted telephone interviews in Phase 1, followed by online surveys in Phase 2 of the study. The goal, quite simply, was to take the pulse of the average adventure rider in relation to the Dempster Highway.
The paper provides a concise and in-depth look at the motorcyclists who use the highway. For example, the document highlights the fact that most riders of the Dempster “were male, between the ages of 45 and 64, and were either retired or worked in a professional/managerial setting. More than three-quarters of past riders had at least a college/technical diploma, and almost half had an annual household income over $120,000.”
Other interesting information from the research relates to the make and model of motorcycle most riders used to tackle the Dempster. 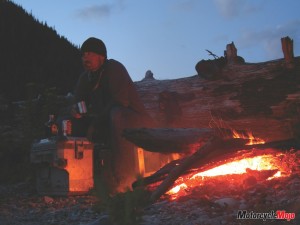 It states: “The most popular motorcycle on the Dempster Highway was the BMW R1200GS Adventure, closely followed by Kawasaki KLR 650, although it’s noticeable that almost half of the riders were on a motorcycle manufactured by BMW. Smaller displacement (500 cc and smaller) motorcycles were rarely used. Only two respondents indicated riding smaller motorcycles, and only one of these rides were within the last 10 years. Additionally, all but two motorcycles were designed to be dirt-road-friendly to some degree.”

The D2D event is also cited in the research as an important stepping-off point for motorcyclists visiting Dawson City before riding the Dempster.
“We see in excess of 250 people each year for the dinner, and that’s when the Dawson City firefighters cook for us,” Van Nostrand says. “But, there can be as many as 400 motorcycles in town for this gathering of like-minded motorcyclists, either heading up the Dempster or heading back. We get people from all over the world attending D2D, including Europe, New Zealand and Australia.”

In his own interaction with the Dempster, Solaro learned just how quickly the wind could wreak havoc. “I had a south wind from Eagle Plains, and I naively thought it was the fairing cutting through the air,” he says. “But it wasn’t the fairing – it was the wind giving me an extra push. Down in a gulley, that wind caught me and literally blew me over.”
Solaro does note that “As long as the road is dry, it offers great traction.” But when he ran into some rain and snow, it was a different story. “That’s when the road surface becomes really greasy and snotty. It’s really slippery and it almost pulls you down into the surface. After a rain, it doesn’t take too long for it to firm up again, though.”

Going back to the Dempster Highway Adventure Motorcycle Research for a moment, the paper asked those who have completed the ride whether there were any issues finding fuel, and if anyone experienced serious mechanical problems.

About the fuel, most riders had enough thanks to large-capacity gas tanks. The only real complaint was about the fact there’s no gas station at the start of the Dempster Highway, and riders had to return to Dawson City to top up before venturing up the road.
Half the riders had no mechanical issues, while those who did suffered mainly from flat tires.
There was one more serious incident that involved a broken chain puncturing an engine case. A local Dawson City welder, TIG welded the hole closed, and with help from Van Nostrand, the anonymous motorcyclist performed further work to his machine and completed the ride, making it back home to Fort McMurray in Alberta.

Despite the rider’s trials, this comment found in the research paper reflects how most motorcyclists feel about travelling the Dempster Highway: “Awesome trip of a lifetime, and I would love to do it all over again.”

Solaro, who says he took physical nourishment from the very surroundings during his northern motorcycle ride, would agree. “I get a wide-eyed, little-boy grin every time I think of the Dempster Highway.”
And as of late 2017, should Solaro, or any other adventure rider choose to motorcycle in the north, the Dempster Highway will take them all way to Tuktoyaktuk.