It’s 7 a.m. and dawn is just breaking on this chilly September morning in rural New Brunswick. I’m sitting on a borrowed Honda CRF250L in a staging box that’s marked on the ground with fluorescent orange paint; also painted on the ground in front of it is a big letter B. Two other boxes, one on each side of us, bear the letters A and C. The boxes are big enough to hold four motorcycles side by side, and there are four rows of bikes behind us. I’m part of Team Media along with Mojo scribe Costa Mouzouris, Jacob Black from Auto Trader and Jim Vernon. We wait for our signal to move forward to the starting line. 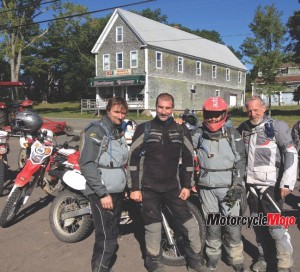 The boxes designate one of three different routes for the Fundy Adventure Rally (FAR), a rally that was created by Rob Harris in 2014 after several years of mapping and documenting back roads, logging roads and trails in the Fundy area of New Brunswick. The 2016 rally, however, is a little different from previous years. Rally master Harris had lost his life in a motorcycle accident a few months earlier, so this group of about 120 riders, from as far away as the American northeast and Ontario, and points in between, have gathered to not only test their off-road mettle in Eastern Canada’s de facto adventure rally, but to pay tribute to an easygoing, well-liked rally founder of Canada Moto Rallies and Canada Moto Guide.

In fact, Harris had been asking me to attend his rally since its inception, but owing to other commitments, I was never able to make it. This time, though, I cleared my schedule to ensure I could enter in the excitement and camaraderie that naturally comes from riding in an off-road event that meant so much to Harris.

Headquartered at Adair’s Wilderness Lodge, 25 km southwest of Sussex, the rally is based around the previously mentioned A, B and C routes, and a less challenging on-road scavenger hunt.

Harris spent years developing the route system with the help of local riders and the N.B. Dual Sport Club. Taking notes, marking up map books and determining a grading system for every road and trail, Harris was able to flesh out the following three classes: A routes are paved and gravel roads; B routes are for lightly armoured bikes (skid plates, etc); while the C routes are better suited to experienced riders with properly prepped dual-sport or adventure bikes and 21-inch front wheels. The routes also meet up at various points so the riders can switch up the day’s six sections they choose to participate in.
Harris was no stranger to running rallies. He started the Mad Bastard Scooter Rally and the Dusk to Dawn Rally over the last 10 years, and it’s this experience and his mapping abilities that enabled him to conceive the FAR. But it was his wife and business partner, Courtney Hay, who was instrumental in the implementation of the 2016 Fundy rally.

A Little Help From Friends 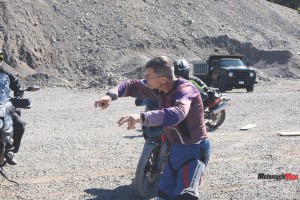 Every event depends heavily on volunteers, but the death of mastermind Harris put the rally in jeopardy for obvious reasons, and Hay couldn’t do it all by herself. Harris had been working with Charles Landry the previous year, and Landry was an important spoke in the wheel helping Hay, as were Eric and Terri Russell, along with their daughter, Kara, and volunteers like Vernon and Genevieve Desrosiers, long-time friends of Harris’, and others who pitched in to make the event happen.

It wasn’t just the goings-on behind the scenes that made the event successful. There were evening and afternoon seminars by off-road guru Lawrence Hacking, Honda product expert Warren Milner and off-road GS-certified training by Mojo’s own Clinton Smout.
Honda and BMW were also there providing dual-sport demo rides. As an added bonus, this year’s rally will see the three Canadian finalists for the BMW GS Trophy chosen from Canada’s three western, central and eastern GS Challenges.

Adventure rides are not to be taken lightly. The terrain can be gnarly and dangers can lurk around any corner, so it’s best to be prepared. On Friday night, there was a mandatory two-hour riders meeting hosted by Eric Russell, with input from Terri and Hay. Items on the agenda included rally guidelines; a new starting system (which proved to be very efficient); discussion of the A, B and C routes; following tracks on an appropriate GPS unit and on supplied maps; a Q&A session; and safety and emergency procedures, which led into Terri’s explanation of the Spot tracking device.

Spot stepped up as a major sponsor by supplying a Spot GPS device to all teams. The device would accomplish two important facets of the rally – to track the teams from rally headquarters to know exactly where they were at any given time, and to provide GPS coordinates to emergency services if so required. The coordinates would also facilitate picking up broken-down motorcycles.

Ride Your Own Ride 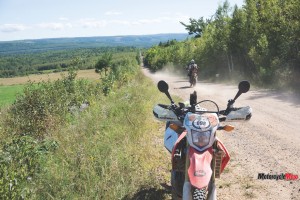 Team Media determined we’d leave on the B route as more of a strategy than anything else. The C box held too many teams, and we based our strategy on the fact that we wanted to get on the road and not wait behind a dozen or so teams for our chance to tackle the 500 km route, which is just a small portion of New Brunswick’s massive trail and logging road system. Second to that strategy, three of us in Team Media were on borrowed bikes from the Honda demo truck – Mouzouris was riding the XR650L, and Black and I were on a pair of CRF250Ls (Vernon was on his own CRF250L) – and we wanted to return them in the same condition, so we thought we’d start easy on an intermediate level.

Black, the youngest on our team, was already handicapped. Three weeks earlier he had an argument with some hay bales while road racing at Canadian Tire Motorsport Park and broke his left hand. Determined not to let a little thing like that get in his way, he cut his cast off while en route from Ontario to the rally.
We were lucky the fog that the Fundy coast is so famous for never really materialized, allowing us to see the beautiful far-off vistas of farms with pastoral scenes of what appeared to be perfectly manicured squares of green, and fields dotted with cows and round hay bales, all bathed in the early morning light of the rising sun.

The rural New Brunswick scenery is simply outstanding, with some of the prettiest country scenes I’ve ever seen.
Weather can also make or break a ride. We got lucky there, too, as I’m told that a tropical storm blew in during the 2015 rally, making things extremely soggy for the riders.

I must say, I prefer bigger bikes, but the bone-stock CRF250L worked flawlessly in almost all conditions. There was only one time, going up a hill filled with medium-sized rocks, that a bit more power would have been welcome, but downshifting early enough would have solved the problem. I, however, was too concerned about navigating and I let the rpm get too low – I didn’t want to lose momentum by pulling in the clutch, but there wasn’t enough power to get out of my situation without a lower gear – and was stopped dead when the bike wouldn’t roll over a rock and it fell over. There was no damage done, and that whole scenario was entirely my fault. Honda’s DCT technology would have saved me from that embarrassing situation by automatically shifting into the proper gear for me. My only complaint with the bike is that it’s light and the rear brake was like an on-off switch that locked up easily, which was great for sliding into corners.

The CRF250L could very well be the best value on the market for a competent small-displacement dual sport, and I look forward to trying the longer legs of the new CRF250 Rally.

Starting off on the B route worked well for us, as we were on the road in just a few minutes while the C box continued piling up with four-rider teams. For our second section, we had chosen a C route, but then switched back to a B route once they met up again, as we had been warned at the riders meeting that the C3 section was the most difficut. – remember, we had borrowed bikes and Black’s hand was in less than perfect condition. It seems the warning was accurate. Many riders got through it unscathed, but one ended his day with a broken leg and another had to be rescued after suffering a broken ankle.

Team Media continued the rest of the day on the C routes that consisted of broken bridges, water crossings with the odd beaver dam thrown in for good measure, large gooey mud holes, exposed culverts, hills with lots of rocks and roads with loose gravel in the corners. We finished the day’s ride in about 11 hours, well within the allotted 12-hour time frame, garnering us a Silver award. Had we finished all C routes, we would have come away with a Gold. Maybe next time!
Kudos to the organizers and volunteers. From my seat, the event ran without a hitch. Registration is open now for the fourth annual 2017 Fundy Adventure Rally, which runs earlier this year, from August 17–20. For more info, to register or for a comprehensive list of items to bring and things to consider, go to fundyadventurerally.com.