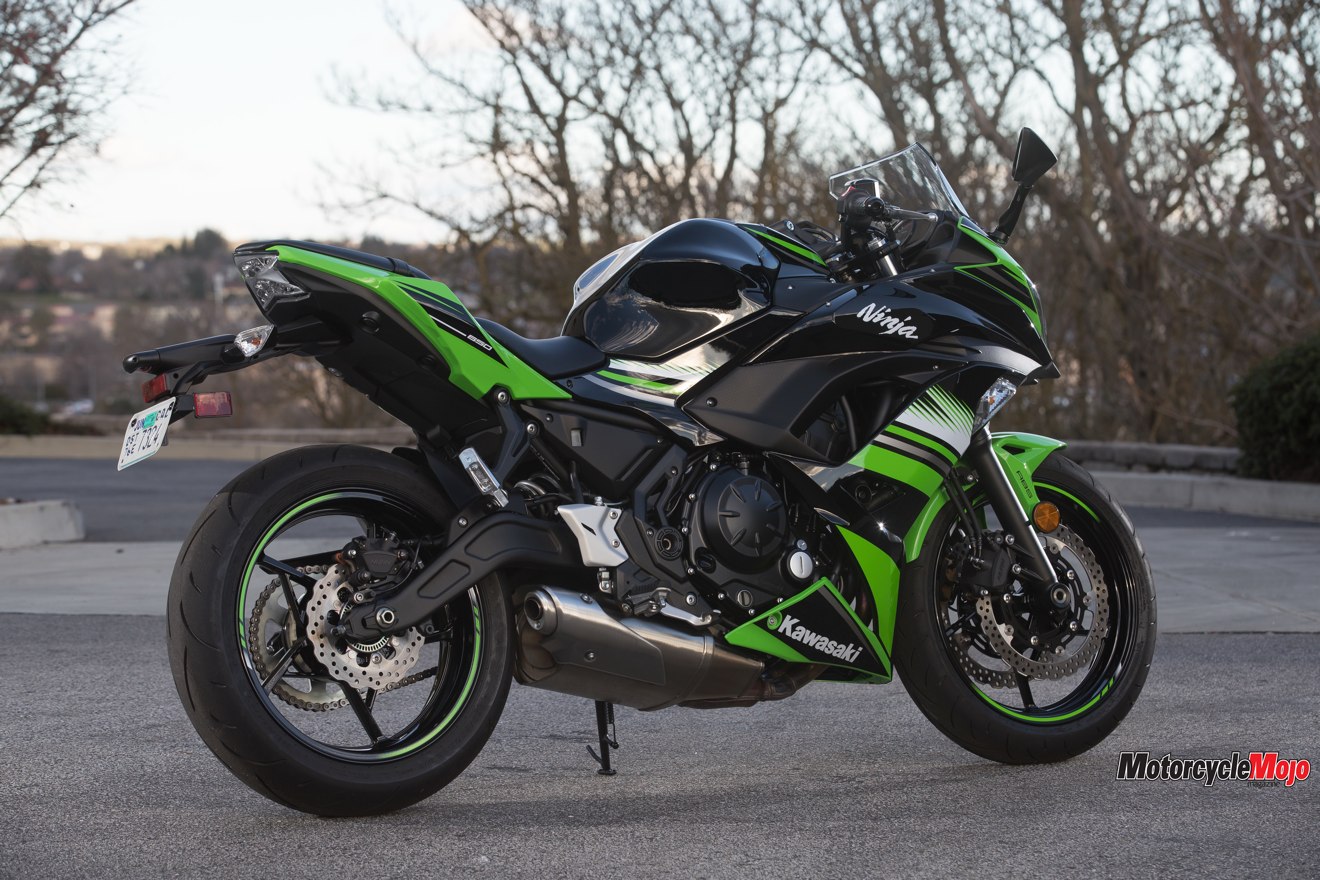 Kawasaki has a relatively long history of producing parallel-twin sport bikes, dating back to the 1983 GPZ305. It was a lightweight entry-level bike that mimicked the then new styling of Kawasaki’s bigger GPZ sport bikes. In 1988 came the Ninja 250, which has enjoyed an unbroken production run leading right up to today’s Ninja 300. In 1994, the company introduced the EX500, which proved a very popular choice among budding riders and racers alike. It, too, enjoyed a lengthy production run before Kawasaki pulled the plug on it in 2009. It was dropped because for three years it had been competing on the Kawasaki showroom floor with the Ninja 650R, which was introduced in 2006. 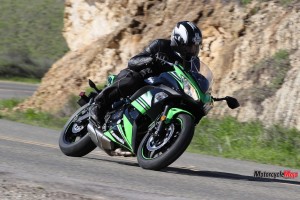 The 650R offered riders an accessible, affordable sportbike option that was much more modern and more powerful, and handled better than the EX500, but with more manageable power and a more comfortable riding position than the ZX-6R supersport. The 650R also featured distinctive styling among other Ninja models, utilizing a unique steel frame with large-diameter tubing up front, a single square-section backbone in the rear and a single shock absorber offset to the right side of the bike, which became the bike’s hallmark design feature. The bike received a major overhaul halfway through its life cycle, but it retained these characteristic styling traits. 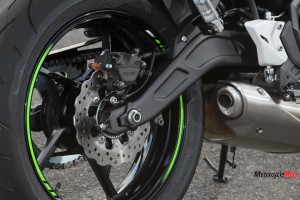 We travelled to Paso Robles, California, to ride the new Ninja 650 (Kawasaki has since dropped the R), which has been completely redesigned for 2017. And the change is radical – everything is new. About the only thing that is similar to the outgoing model, aside from the name, is the engine, though even it has seen a major revision. The 649 cc parallel-twin’s basic specs, such as bore, stroke and compression ratio, are the same as before, but the cylinders no longer have steel liners, which reduces weight and brings them closer together for a narrower engine. Within a redesigned cylinder head are new cams with slightly milder timing, and the throttle bodies are 2 mm smaller in diameter, at 36 mm. These changes combine with revised engine mapping to increase peak torque by 1.5 ft-lb to 48.5, while increasing available torque in the lower rev range. Gearbox ratios are unchanged, but the clutch is now mechanically assisted to reduce lever effort, and it incorporates a slipper function. 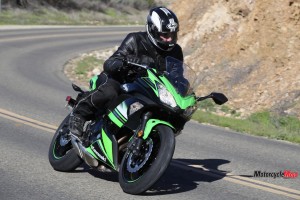 The frame is an all-new steel trellis design that weighs an astounding 8.6 kg less than before. And that’s not the only component that has seen a reduction in weight: the wheels, swingarm, engine and various other components are lighter than before, bringing the total weight savings to 19 kg, which is unheard of in a single model upgrade. Hard-core racers would be hard pressed to remove half that amount for the racetrack.
Steering geometry is more aggressive and much more sportbike-like, with less trail (99 vs. 110 mm) and a steeper rake angle (24 vs. 25 degrees), while the wheelbase remains at 1,410 mm. If you’re not yet convinced of just how sporty the new Ninja 650 is, take note that its chassis geometry is now almost identical to that of the ZX-6R, while wet weight, at 192 kg (426 lb), is identical to the 6R’s wet weight.

The bike’s lines are now much sharper, more angular and sportier, aligning the 650’s styling more with the company’s supersport Ninjas – much like that original GPZ305 looked like its bigger, sportier stable mates. Although the 41 mm conventional fork is retained, the 650’s trademark exposed shock absorber is gone, having moved to the centre of the frame and connected to the swingarm by linkage instead of directly. The fork has been retuned primarily to compensate for the weight reduction, while the rear suspension is more progressive through its travel, mostly due to the added linkage.

More Comfort in a Sporty Stance

The riding position has been changed for a slightly more sporting stance. The hand grips are farther forward and lower, though the foot pegs have also been moved forward and are a bit lower, while the seat height has dropped 15 mm to 790 mm, which is relatively low for a sport bike. Without a previous model on hand, it’s hard to tell what the changes actually feel like; the riding position is nonetheless much more accommodating than any supersport machine, placing you into a modest forward lean with a very easy reach to the handlebar. At six feet tall, I found the legroom a bit cramped, but Kawasaki does offer a 25 mm taller accessory gel seat, and I’d take it.

When you’re seated, the view forward reveals a neat new instrument cluster that features a prominent analogue tachometer with a digital readout to the right, and an array of warning lights to the left. The digital display has a black background and grey digits, providing an attractive, upscale appearance you’d expect on a high-end supersport machine. Display info includes gear indicator, time, coolant temperature, twin trip meters, fuel economy readout and fuel gauge. There’s also a programmable shift light that works in conjunction with the display’s backlighting, which changes hue from white to pink (at 500 rpm before the selected shift rpm) to red, when it’s time to shift.

This light show isn’t visible in daylight, though the yellow shift light is. You can also shut the system off. Looking down, you’ll also see an unusual three-piece cast handlebar bolted onto the top triple-clamp. This was designed to give the Ninja 650 a slightly more upscale look than the tubular handlebar used on the Z650 naked bike, with which the Ninja 650 shares platforms.

Unfortunately, the temperature in Paso Robles was very unseasonable during the bike’s press launch, dipping to just below freezing when we took off in the morning, with forecast highs barely touching the double digits. Recent rainstorms had also caused several road closures in the area, which forced our hosts to remap our route. Despite this, some of the roads we did travel on were strewn with debris, gravel, sometimes mud and often running water. This, of course, also prompted our lead rider to set a modest pace.

Although there were no previous-generation Ninja 650s on hand, I have spent some hours on one several times in the past, including last summer, and I remember there was really nothing unpleasant about it. I also remember it felt lazier and more top-heavy than the new bike. This 650 is narrower between the knees and it does feel much lighter, whether at a standstill or at speed – a 19 kg reduction in weight will do that, after all.

Clutch effort is light, and the bike launches with very little throttle, accelerating away with a light throbbing vibration that gives the engine an almost big-twin feel. Although the engine isn’t electric smooth, it is mostly vibration-free until about 110 km/h, where some buzzing is felt in the fuel tank and seat, though the handlebar and foot pegs remain buzz-free, as do the mirrors, which offer a clear, almost unobstructed rear view.

Although the pace was relatively subdued owing to the poor conditions, I did perform a few full-throttle roll-ons, and the engine does, indeed, feel more powerful than before, pulling in a linear fashion, with just a little drop in pulling power as the tachometer needle swings toward the 10,000 rpm redline. The engine feels strongest when gassing it from about 5,000 rpm, and it emits a very satisfying intake howl when you do so.

Steering is light and neutral, and contact-patch feedback is confidence-inspiring, an especially welcome handling trait considering the sketchy pavement we rode on. The seat is short front to rear, so you can’t really move around much, and it’s firm, causing me to squirm around near the end of the 200 km day – that’s another reason I’d opt for the accessory gel seat. Suspension is sprung on the soft-ish side, which is understandable considering the Ninja 650 is designed to put more miles on the road than on the track. It nonetheless worked just fine, providing good compliance over the majority of bumps, though I suspect it might be too soft for an aggressive sporting pace. It also proved a bit harsh over larger, sharp-edged bumps.

Despite these minor kinks, the Ninja 650 is improved in all respects compared with its predecessor. And for all the new bits and weight loss, it costs only $200 more than before, now at $8,099, and that includes standard ABS. Add $300 for the green and black KRT (Kawasaki Racing Team) model like my test bike. It’s lighter and produces more mid-range torque than either of its four-cylinder competitors, the Honda CBR650F and Yamaha FZ6R, undercutting the former by $1,600 and costing just $100 more than the latter. This represents a great value, especially when taking into account that when the Ninja 650R was introduced 11 years ago, it retailed for $8,599.

The 2017 Kawasaki Ninja 650 is certainly an improvement over the model it replaces. It remains a great step up from a smaller bike, with enough power to satisfy even veteran riders. It is now among the sportiest bikes in its category, and not just in appearance alone, since it now rides as sporty as it looks.