If you’re not familiar with the term “bobber,” look it up in the Oxford Dictionary of English, you’ll find the literal description, which is either for a float placed on a fishing line or for a person who rides a bobsleigh. What you 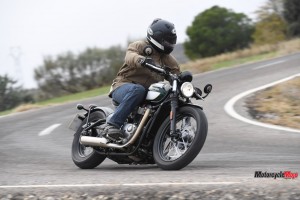 won’t find is what the word has represented in motorcycling since the mid-20th century. The term was coined in the late 1940s to refer to hardtail-framed motorcycles that were stripped of all unnecessary items (some items were actually necessary, like the front brake); the fenders were cut very short, or “bobbed”; and low, flat handlebars were bolted on. And bobbers were mostly rider-only machines, uncluttered by such trivial things as pillion seats.

When Triumph introduced the completely redesigned T120 and Thruxton with an all-new, liquid-cooled parallel-twin last year, the company was certain to follow up with additional Bonneville models, and it has this year, with the Bonneville Bobber. 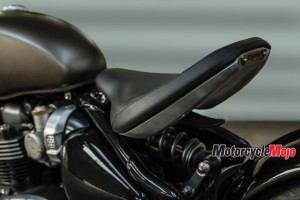 The 2017 Bonneville Bobber is a custom bike unlike any other recent Triumph. Sure, like the slew of recently introduced scramblers and café racers (of which you can find examples from Triumph), the Bobber is part of the retro-bike revival that is proving popular among millennial riders, but this is one of the coolest-looking retro bikes out there. Triumph held the press intro of the Bonneville Bobber in Madrid, Spain, and we were there to ride it.
The Bobber’s styling is something you might expect from a low-volume boutique bike builder, but this is a production bike built by Triumph. It features a minimalist design with visual cues that hark back to those bare-bones customs of yesteryear, like the nearly flat handlebar, and the downward-
sloping rear portion of the frame that blends into a triangular swingarm, faithfully mimicking a rigid frame. The look is further accentuated by a tire-hugging rear fender with a solo saddle hovering above it. And that solo saddle is the only seating choice; there are no provisions to add a passenger seat or foot pegs. 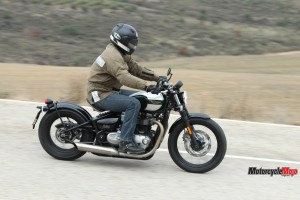 But it doesn’t end there. There’s a fine attention to detail that makes the bike stand out whether you’re looking at it from a distance or up close. The mechanical parts meant to be seen are emphasized (like the exposed vintage-looking battery box), while the rest of the parts are well hidden – wiring is almost completely out of sight. Although the engine is liquid cooled, you won’t see a single coolant hose. What looks like a transmission cover on the right-hand side below the seat is actually a cover that conceals the rear brake master-cylinder reservoir and the coolant overflow tank.

The riding position is more cruiser-like than standard bike, but fortunately not an extreme, foot-
forward kind of cruiser. It’s a modest reach to the handlebar, and the foot pegs are placed just enough ahead to put your knees at a right angle. The seat is adjustable fore and aft, with a range of about 50 mm, and the bracket on which it slides slopes rearward, so the seat also drops a bit as it moves back. The seat adjustment is semi-permanent, as you must loosen a couple of bolts to adjust it. The seat is low (690 mm at its lowest), so it’s a very easy reach to the ground. I only sat on a parked bike with the seat in the rearward-most position and found the reach to the handlebar too long, so I kept the seat on my test bike in its forward position and found the riding position quite accommodating for our 200 km ride. Despite its rather skimpy appearance, the seat is wide, well shaped and supportive, providing a comfy perch for the daylong ride. 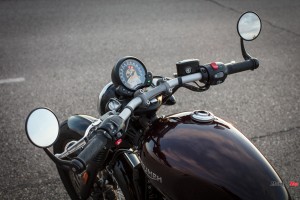 The Bobber is powered by the same 1,200 cc High Torque six-speed twin as the T120’s, but it has a twin airbox and shorter mufflers, and is tuned to produce 10 per cent more bottom-end torque than the T120. It’s a smooth engine, with more than 70 ft-lb of torque available from about 2,800 rpm to just over 5,000 rpm,
peaking at 78 ft-lb at 4,000 rpm. That’s a very useable powerband that makes the Bobber a blast to ride in town. Switchable traction control is standard, as are two ride modes, Rain and Road. Horsepower is reduced a touch compared with the T120, by two horsepower to be exact, at 77 hp.

The mechanically assisted clutch is beginner-bike light, and the gearbox clicks into first with a light touch. First gear is surprisingly tall, requiring some clutch slipping to get going, but the torquey engine manages this quite easily. Rolling on the throttle in the top four gears pushes the bike forward forcefully, pressing you hard into the sculpted seat.

The Bobber exhibits light, neutral steering and exemplary stability, which coaxes me to ride it rather enthusiastically along the winding roads just outside Madrid. It powers out of corners with authority, while producing a rich, deep exhaust note in return (we were told that the mufflers were shortened for this reason). Slowing for the entry into those corners takes a fair amount of braking effort, though. To achieve a clean-looking front end, there’s a single 310 mm front disc, squeezed by a twin-piston caliper – not the most efficient setup, but adequate for the type of riding the Bobber was designed for. It also has standard ABS in case you do squeeze hard enough to lock a wheel.

Triumph’s press literature claims, “A bobber without compromise,” but there is actually a compromise made in the name of styling, and that compromise is in terms of cornering clearance. Suspension travel has been reduced to 90 and 77 mm front and rear, respectively, from the T120’s 120 mm at both ends. This means that the Bobber’s non-adjustable suspension is firmer, but also that its foot peg feelers touch at modest lean angles. It has much more cornering clearance than does the Harley Sportster Forty-Eight, which is one of the bikes Triumph is hoping to steal away sales from, and the Bobber corners better than the average cruiser, but if you ride with any gusto on a regular basis, you’ll have to stock up on peg feelers.

Another, perhaps lesser, concession made strictly for appearance sake is that the slender fuel tank has been trimmed down to a paltry nine litres from the T120’s 14.5 litres. Taking into account the factory’s claimed fuel consumption of 4.1 L/100 km, the Bobber could go about 220 km before it runs dry, but
you should probably expect less than 200 km under normal conditions.

Cooler Than the Competition

The back-to-basics Bonneville Bobber is a great choice for someone looking for a bike that will turn heads. It’s more of an urban runabout than a long-distance motorcycle, though it remains entertaining enough to make longer hauls an occasional possibility. It has more grunt than the Sportster Forty-Eight, has more sex appeal than the Yamaha Bolt, is more svelte than the Indian Scout and, frankly, looks cooler than any of those low-slung cruisers.

If you have a propensity for personalizing your bike, Triumph already has more than 150 accessories available for the Bobber, as well as two inspiration kits, which are a pre-selected assembly of parts designed to make altering your Bobber a bit easier. The Old School Bobber kit includes an ape-hanger handlebar and the required installation hardware, brushed mufflers, a brown leather seat, a swingarm-mounted storage bag and various trim bits. The Quarter Mile Bobber kit (my preferred variation) includes clip-on handlebars, a black exhaust system, even shorter fenders than stock, a black leather seat and black trim pieces. You can also get optional heated grips (which worked just great in the single-digit temperatures during our ride), and very non-bobber-like cruise control.

This bike has apparently been greatly anticipated, and according to Triumph, initial deposits on the Bonneville Bobber are twice what they were when the liquid-cooled Thruxton was introduced last year. At $13,700, it’s priced to compete more so with its American rivals, and it looks equally good regardless of which of the four colour schemes (black, red, green/silver or matte grey) you choose, though colours other than black come at additional cost. There are other bikes I’d take on long or fast rides, but sometimes I just feel like donning my open-face helmet and jeans, and scooting about aimlessly (although that’s the gist of most of my rides, now that I think about it). For me, the Bobber would be an addition to my garage, a second or maybe third bike that I’d take to social gatherings or on shorter, fair-weather rides. The Bobber is the ideal bike to fulfill those needs and is better equipped to handle winding roads than a full-on cruiser, all while looking pretty damn good, too.