What goes around, comes around, and with the resumption of tribal warfare between Indian and Harley-Davidson in 2017 – not only in the showroom stakes, but with full-on factory race teams pitted against each other in the revitalized American Flat Track Championship – it’s yesterday once more. 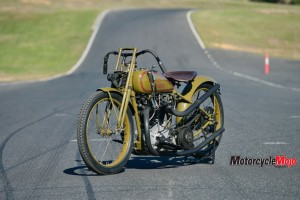 For exactly a century ago, the Harley-Davidson Motor Company, which had been previously hesitant about going racing, took the fight to its dominant Indian and Excelsior rivals with its all-new Model 17 FHAC 61ci (998 cc) eight-valve racer, which made its competition debut at the gruelling Dodge City 300-mile race in 1916 – and won! This was the equivalent of the Indianapolis 500 on two wheels, held on a two-mile oval track in the heart of the Midwest.

The victory ushered in several years of Harley-Davidson success in U.S. racing, even after the company’s management discontinued running its official team after totally dominating in 1921, when it swept the board by winning every single National Championship category. After Indian’s 1-2 finish at the opening round of the 2017 American Flat Track series at Daytona on March 2017 with its new FTR750 V-twin, H-D fans will no doubt be hoping that the company’s equally young XG750R eight-valve racer, derived from the 750 Street road bike, will be able to improve on Jake Johnson’s fourth place in the Daytona TT, the only Harley in the top 10. But it’s early days yet, and the Milwaukee-based Motor Company knows just a little bit about how to win races and titles on dirt ovals, after nearly 50 years of dirt-track dominance with the legendary XR750.

Of all the racing motorcycles ever built, any place, any time, the American V-twins of the ’teens and ’20s are unquestionably the most rakish. Lean but meaty, lithe but muscular, they simply exude speed and purpose. Yet at the same time, these early Americans possessed a degree of mechanical sophistication quite unmatched by their European counterparts. Born to race on the numerous dirt ovals and board tracks of pre-First World War America, nurtured in the intense competition between half a dozen rival factories, American motorcycles sported such innovations as countershaft gearboxes, all chain-drive transmissions, four-valve cylinder heads and pump-driven mechanical oiling long before these features gained acceptance on the other side of the Atlantic. Such novelties brought two attributes in their wake: speed and reliability, so that once the message had spread to Europe, U.S.-built bikes, especially Indian and Harley-Davidson, began to reap great success there, too. 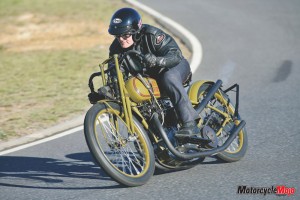 Nominally available to privateer riders in compliance with the rule of the then governing body, the Federation of American Motorcyclists (FAM), that any factory’s racing motorcycle had to be offered to the public, the 998 cc V-twin eight-valve Harley Model 17 was listed for $1,500 in 1916 – a huge sum at that time that would buy a pretty nice house in Milwaukee, when even Indian’s most expensive race bikes sold for no more than $350. It was clearly an effort by Harley-Davidson to funnel these purpose-built racers exclusively to those who would put them to good use, while at the same time paying lip service to the federation’s requirement. This effectively restricted the eight-valve’s circulation to factory team riders, also known as the Wrecking Crew, and favoured privateers, and also accounts for the very small number of such bikes made between 1916 and 1928 – perhaps as few as 20, but certainly no more than 50, plus around 30 examples of the 500 cc four-valve singles, which were effectively the twin minus one cylinder. Only five or six original examples of the V-twin still exist today – two of them in Italy, where they were raced with
success – making it undoubtedly the rarest and most valuable Harley-Davidson model ever built. The last time one of these surfaced at auction was when a complete and original unrestored barn find sold in Australia for AUD$600,000 in September 2015 – equating to around US$425,000. Pricy!

There’s one more such bike Down Under, however, although Melbourne property developer Peter Arundel’s eight-valve Harley-Davidson Model 17 was built in 2012 by Arundel and local vintage American bike guru Lindsay Urquhart from a blend of replica parts and 1924 period components. But there’s an added twist to this particular tale – for Arundel is widely recognized to own the finest collection of Indian motorcycles in the world today! He has at least one example of every model Indian ever built – so how come the Harley, Peter?

“Well, I’d been collecting Harley eight-valve parts for the last 25 years,” came the reply. “It started when I bought a lot of gear off Steven Rudd in America back in the mid-’90s, and then I got hold of an original frame here in Australia, as well as the forks, the wheels and the transmission, which all came from here. The flywheels, the crankcases and the cylinders all came from Steve, so that’s how the bones of the bike came together.” Arundel continued, “I like eight-valve motorcycles, so I thought – right, let’s build an eight-valve Harley as a counterpoint to the Indian eight-valve we’ve been racing pretty successfully here in Australia, and which I did 158 mph on at the Lake Gairdner Salt Flats.”

As a change from exercising his stable of Indian models, Arundel kindly brought the Harley along to the Broadford track just north of Melbourne for me to experience once again the delights of a bike capable of more than 100 mph – but which has no front brake, and no rear suspension! 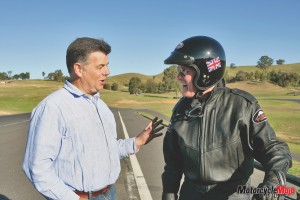 Milwaukee may not be in cowboy country, but the first sight of the eight-valver tells you it’s a two-wheeled version of a Texan cow wrangler: lean, mean and packing a punch. I was pretty nervous as I gingerly climbed onto its surprisingly comfortable, broad leather seat. After all, most bikes that can do the ton nowadays actually have brakes, whereas all that this fire-breathing monster had was a pretty ineffectual expanding band rear stopper, and an ignition control in the left twist grip. At least the Wrecking Crew had magneto cut-outs to help them to slow for turns, and anyway, I bet they didn’t have to get around corners like Broadford’s uphill tight Turn One, or the off-camber left-hander leading onto pit straight. Plus, I had to grapple with that great American invention, the foot clutch, though Arundel had made one inconspicuous concession to modern times. The steeply dropped handlebars have a twist grip at each end, as originally, except that back then, the throttle would have been on the left and the ignition control on the right. But he’s reversed them so as not to get confused, and I was rather glad he’d done that.

So, it was time to engage the brain and get rolling, for moving off the mark on the Harley requires finesse and application. Press down on the left foot lever to disengage the clutch, which locks in place, then select “low” gear on the vertical hand-shifter lever mounted on the left of the tank, by pushing the metal knob away from you. Next, retard the ignition with the left twist grip, then release the clutch pedal keeper and try to fiddle the throttle in the right twist grip in unison with the actions of your left foot to produce a smooth takeoff. The wonder is that I only stalled it once, since at the same time, if you want to really accelerate, you have to advance the ignition with the left hand. There’s never a chance of getting bored riding one of these bikes.

I briefly considered opting out of trying to get second gear at all, and shoving it straight into high gear. At this point, the unwritten ethics of track testing intervened, so after shutting down the throttle, I grappled again with the clutch pedal while moving the gear lever through the neutral slot to second. As the gear engaged with a lurch, thanks to an insensitive boot on the clutch, I was almost shoved off the back of the seat as the Harley leaped forward while I had just a single hand on the steeply dropped bars. Fortunately, the track was empty, so the ensuing wobble that almost took me from one side of it to the other didn’t result in a collision, and having gathered myself up, I gingerly repeated the process to get into top gear, but this time managed to avoid any swerve. Whew!

The big V-twin engine is so flexible that it orgave my lack of dexterity in matching foot to hand, and, after a few laps, I’d discovered the approved technique for getting this potent but primeval package around a turn so that I was able to speed up gradually, and start using the considerable reserves of performance on tap from that lovely engine. Simply retard the ignition, then shut off while at the same time applying the pretty useless foot brake, give ’er a brief crack of throttle to get set up nicely for the corner, then swing into the turn. Care must be taken not to lean over too far, for although the 28” x 3” four-ply Commander tires are of modern compound and manufacture, using the grip they offer to anything like its potential quickly results in grounding the low-slung footboards, which are unfortunately not hinged to prevent disaster, should this happen. Once around the turn, accelerate smartly away while advancing the ignition.

Well before the days of their current values, I owned a Brough Superior SS100 with a Harley-type Castle fork that I rode quite a bit, and I’ve always contended that this was the best front-end design available until the advent of telescopic forks. My ride on the eight-valve Harley confirmed this with the Springer fork smoothing out the few bumps I was able to find. Accelerating hard around Broadford’s long left-hander leading on to the straight, I found the Harley tracking even and true. The wheelbase looks to be longer, too, than on the board racers of the time, which would have improved high-speed stability, and along with the 28-inch front wheel, would explain the slow steering.

But that fabulous engine is the real gem. Pumping out a good 60 hp in a bike weighing 122 kg dry, it’s not surprising that the Harley proved to have enticing performance under acceleration. But the Harley was almost too effective for its own good, and the Wrecking Crew’s dominance of U.S. competition after a clean sweep in the 1921 season, the factory soft-pedalled on its involvement with racing. The eight-valve was eventually phased out, and instead of employing this sophisticated and effective design in future years, especially for a spinoff road model, Milwaukee opted instead for the less complicated but also slower pocket-valve machines, later superseded by the relatively humble WR and KR side-valvers.

Reintroduction of an Eight-Valve Harley

In time, the XR750 overhead valve design restored some degree of engineering modernization to the Harley fold, albeit with just two valves per cylinder. We had to wait until the 1994 introduction of the liquid-cooled double overhead cam VR1000 Superbike for the reappearance of an eight-valve V-twin from Harley, which, despite its competitive troubles, ended up siring the V-Rod family of street bikes that debuted in 2001. However, it’s taken until 2017 for the arrival of the Milwaukee-Eight – Harley’s first all-new motorcycle engine in 15 years, and the ninth engine in the Motor Company’s Big Twin lineage – to finally bring eight-valve technology to its volume production air-cooled range of pushrod models.

But in the competition arena, after the venerable Harley XR750’s iron grip on U.S. Flat Track title success was finally loosened by the eight-valve Kawasaki’s victory in the 2016 AMA Championship series courtesy of Bryan Smith, its domination of this category of racing is now under further threat from its bitter showroom rival Indian and its new FTR750 eight-valver. So it was inevitable that Harley’s race department should have turned once again exactly 100 years later to the technical format that set them on the path to competition glory back at the start of the last century – hence the eight-valve V-twin XG750 derived from the 750 Street road bike. History repeats itself!