Suzuki returns as a major player in the litre bike battles

The mid-range power delivery on the GSX-R1000R feels almost docile, until I look down at the speedo just before braking for Phillip Island’s Turn 1 and see 290 km/h. In the interest of self-preservation, I do so only once though, and speeds increase in later lapping sessions. As I lap the famed Australian circuit, I glance occasionally in the mirrors, which offer mostly a view of an empty racetrack behind. On this lap, however, I glimpse a bike catching up to me, the only bike to do so thus far. As the rider pulls alongside and passes me, I recognize the red, white and blue helmet livery of Kevin Schwantz. The former world champion has been invited to share the track with us during the world launch of the 2017 Suzuki GSX-R1000. 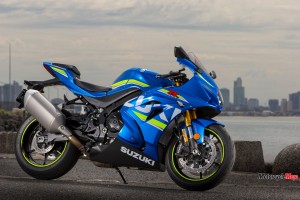 Schwantz graciously slows ahead of me and allows me to follow for three awe-inspiring laps, showing me a slightly different way around a few of the corners, and helping me pick up the pace. As I bust a sweat trying to keep up, he looks as if he’s on a cool-down lap, moving in slow motion and barely hanging off his bike. His unmistakable talent is evident as he lets the bike squirm around on the edge of traction while he gets on the gas hard exiting corners. After about three laps, he simply picks up the pace again and chases down another rider.

The GSX-R1000 has always been user-friendly, at least by open-class supersport standards, and although it has been completely redesigned for this year, that hasn’t changed, despite a relatively large jump in performance. The last major update came to Suzuki’s flagship sport bike in 2009, and for the first time since its introduction in 2001, there are now two models to choose from: the GSX-R1000 and the higher-spec 1000R we’re here in Australia to ride.

While its competitors have all inched their way up to the 200 hp threshold, until this year, the GSX-R1000 had to make do with a paltry 182 hp. The bike now claims 199 hp and, like its rivals, now has traction control to help keep the wheels in line. This new GSX-R also comes with ABS, which was actually introduced on last year’s model, but the system has significant improvements for 2017.

The new 999 cc inline four has a 1.5 mm larger bore and a 2.2 mm shorter stroke, which allows it to rev an additional 1,000 revs, reaching 14,500 rpm. Suzuki has borrowed some high-speed trickery from its MotoGP program, such as variable valve timing. The intake cam sprocket has a mechanism that lets it advance up to eight degrees, enabling the engine to produce about the same amount of peak torque as before (up to 86.7 ft-lb, from 86) despite the shorter stroke, while maximizing output at high rpm. The system is very simple and requires no electronics or hydraulics, but rather relies on centrifugal force, using a series of rollers that ride in channels in the cam sprocket, thus turning it and offsetting the cam timing. A diaphragm spring returns the sprocket to its original position at lower revs. To deal with the increased revs, the valves now have finger followers instead of heavier bucket-type shims, and the exhaust valves are now titanium. 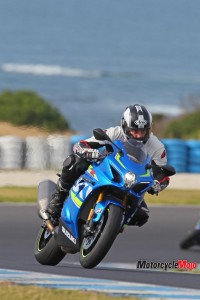 The engine is 6.6 mm narrower and 22 mm shorter, which allows for the use of a 40 mm-longer swingarm while increasing the wheelbase by only 15 mm. This gives the bike a more forward weight bias, improving traction when exiting corners. The gearbox is now a cassette type, so it can be serviced without splitting the cases. The bike also gets a mechanically assisted slipper clutch, which lightens lever effort and reduces wheel hop when braking hard.

Since the GSX-R was already a stellar handler, chassis geometry has been altered only slightly. Aside from the longer wheelbase, rake angle is almost identical at 23 degrees (the variation is in fractions of a degree), and trail is reduced by 3 mm to 95 mm. The GSX-R1000 has also lost three kilos, now weighing 202 kg, while the 1000R weighs 203 kg, due to different suspension components and added electronics. Both machines share engines, frames and brakes, but the R gets upgraded Balance Free Showa suspension (easily identifiable by the piggyback reservoirs on the forks), a lighter top triple-clamp, a quick shifter that works on up- and downshifts, launch control, a lighter battery and LED position lights in the fairing that run along the tops of the air intakes. Brembo provides front discs that are 10 mm larger at 320 mm, as well as monobloc calipers. ABS is now lean sensing and rear-wheel-lift mitigating, though it is neither adjustable nor switchable. 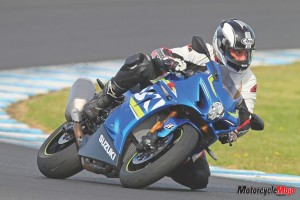 There are three ride modes (A, B and C), each getting progressively milder, though since the track was dry and fast, I used the most aggressive, A mode, exclusively. The traction control has eight levels, with the lower numbers providing less intervention, and it can be turned off; I started in level 5 and settled on 3.

Hopping onto the GSX-R1000R, I felt an immediate familiarity with the machine, maybe partly because the riding position is identical to the previous bike, save for a lower fuel tank. The bike is narrower between the knees (the frame is 20 mm narrower at the spars) and feels smaller than before. An all-new instrument panel is entirely digital, and it displays engine speed, road speed, gear position, fuel level, TC level, time, ambient and coolant temperatures, fuel consumption and two trip meters. The standard model’s gauge has a grey background, while the R’s is black, which also displays launch control and quick-shift info.

We rode the first three of five 20-minute track sessions on the OEM Bridgestone RS10 tires, then switched to race-compound R10s. The suspension was adjusted to the factory settings for the first session, which immediately proved too soft for me (220 lb. fully geared). When cranked over at high speed, the bike wallowed around, though it didn’t startle, and still provided great feedback. The front end also front end also chattered while braking into the Turn 10 hairpin.

Compression and rebound damping settings were firmed up for later sessions, and I immediately noticed a reduction in the wallowing and wheel chatter. Speeds were limited in the first three sessions by the OEM tires, which returned some spectacular mid-turn slides at full tilt. Switching to the sticky tires and firming up the suspension further settled the bike down, thus raising my comfort level and my speed. Turns 3 and 8 are incredibly fast, taken at more than 210 km/h, yet the 1000R railed through them with confidence-inspiring stability, only occasionally squirming a bit on the edge of traction. Of particular note is just how forgiving the 1000R was through the fastest sections, providing excellent feedback, while allowing for effortless corrections if I trail-braked into the slower turns too aggressively. In level 3, the traction control allowed for some wheel spin, which was both felt and witnessed by the increasing amount of black stripes at the exit of every corner. However, it operated seamlessly, never giving a hint that it was managing grip. Power delivery in A mode is exceptionally smooth, and I found myself opening the throttle fully very early at corner exit.

Interestingly, in the later sessions, our hosts gave us the option of disabling the ABS by removing the fuse (it can’t be turned off otherwise), though I chose to leave it on; I figured if a high-performance supersport machine was designed with non-switchable ABS, I wanted to test it at its limit. This decision on Suzuki’s part led me to believe that maybe the system was not up to par with the race ABS systems on other open-class supersport bikes, but my suspicion was unfounded – it worked flawlessly at the limit, and beyond. The ABS was completely invisible, and only on a couple of occasions while braking exceptionally hard going into Turn 10 did it trip, and even then only with minimal intervention, allowing me to maintain my line.

A big plus for the new 1000R is the addition of a quick shifter, which works up and down the gearbox. It provided full-throttle upshifts with no throttle lag whatsoever, and let me hammer down two clutchless gear changes into second, coming out of Lukey Heights and into Turn 10, without missing a beat. Combined with the slipper clutch, the quick shifter is surely worth several tenths of a second when lapping.

Since the GSX-R1000’s last major upgrade, most of its Japanese competitors have been fitted with traction control and race ABS, and they now produce about 200 hp. In that time we’ve also seen the German introduction into the supersport class with the BMW S1000RR, which has proven to be a class leader, and whose design, incidentally, was inspired by the 2005 GSX-R1000. As for the CBR1000RR, it too gets a substantial update and equally substantial boost in performance with advanced electronics for 2017, though I haven’t yet had the chance to ride it.

The previous-generation GSX-R1000 was easy to ride, and Suzuki has now raised its level of performance to at least be on par with the competition, all the while maintaining its easygoing nature. There’s no wheelie control (though the traction control does provide some intervention), and even though the ABS is not as elaborate as the competition’s, I couldn’t find fault with it.