Sometimes meeting new friends, pushing yourself on sketchy roads and learning a bit more about life can only happen on a solo ride

My wrist alarm was like an air horn in the silence of 4:30 a.m., but I wanted to see Great Sand Dunes National Park at sunrise, both for the colours and to avoid the heat. Unzipping my bivy sack, I noticed that although it had rained in the night, the clouds had moved on, leaving the sky a mass of brilliant stars. As indigo brightened to navy blue, I crossed shallow Medano Creek, which runs between the campground and the dunes. A strange movement caught my eye and I stopped to watch as small, regular waves advanced downstream – almost as if the creek had a pulse. I later discovered that, because of the sandy bottom, the running water builds up behind “antidunes,” which then collapse under the pressure of the water, only to again build and then break, build and break. In the spring, they can reach up to 30 cm high. 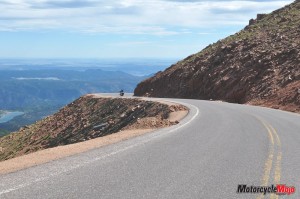 On a dark dune, I waited in a biting cold wind. Still, this was preferable to midday, when the sand would reach temperatures of 60 C, and hikers would be warned not to wear sandals (much less go barefoot) for fear of scalding. At this early hour, I didn’t even have to worry about sweating. I was pleased as well that, because of the night rain, the sand was not being blown about by the wind. When daylight broke over the Sangre de Cristo Mountains, the massive drifts of sand were thrown into sharp and ever-changing relief – performance art, if ever I had seen it. I breakfasted at the local (and only) diner while the bivy, tarp and bike cover dried in the morning sun. After getting my park passport stamped at the visitor’s centre, I set my GPS for Echo Lake and Mount Evans.

Seeing the Big Picture
While a rider’s goal is to pack as lightly as possible, I always bring along paper maps for on-the-fly planning and to supplement the GPS. I love my Garmin Zumo 660; it certainly simplifies navigation, especially in the city. But I also like to watch my progress across a state or province, and a travel tip I discovered several years ago is the KOA Directory. The book is free at campgrounds (or you can order it online if you are willing to pay shipping) and it has individual state maps that are the perfect size for a tank bag window. I simply tear out the maps as needed and I can follow the bigger picture. Which is what I did now.

Looking ahead, I could see to the north that the wide open rangeland would soon be funnelled between the Sangre de Cristos and the Continental Divide. I followed good roads through Buena Vista to Leadville and over Freemont Pass (3,450 m), before taking a short run on I-70 through the Eisenhower Tunnel to Idaho Springs. There, I turned south on 103, which snakes its way up to Echo Lake. I had hoped to ride Highway 5, the highest paved road in America, to the peak of Mount Evans, but unusually harsh winter weather and heavy spring rains had washed an entire 60-metre section of the highway down the mountain. The route was closed to all but foot and bicycle traffic. Reconstruction would be completed next month. 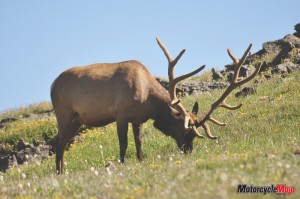 I was distracted from my disappoint-ment, however, when a thin, grey-haired man in a small pickup stopped at my campsite and asked if I would be willing to share, because the campground was completely full. Since I had only a bike and a bivy, I was happy to give another traveller the unused space. As we sat around the campfire sharing stories, he told how he used to own a BMW dealership in Reno, Nevada, before he had a stroke that left him temporarily blind, unable to speak and barely able to walk. He saw this as his wake-up call, sold the business and began bicycling to rehabilitate. Now, at 62, he was here to participate in the 22 km Bob Cook Memorial Hill Climb, an iconic bicycle race celebrating its 50th year. (So that’s why the campground was full.) It was an inspiring and cautionary tale – and, in my experience, the kind of connection one tends to find more often when travelling solo.

A Speck in the Big Scheme of Things
Following Hwy 40 the next morning, I climbed Berthoud Pass, one of the most notoriously difficult passes in Colorado for motorists, thanks to its height (3,446 m), as well as the steep grades and the large number of switchbacks. Being stuck behind a creeping transport truck gave me time to reflect: standing next to one of these rigs in a parking lot, you realize how big they are – the tires alone are higher than my waist. But on a ribbon of road etched into the massive Rocky Mountains, that Mack becomes a Matchbox. Letting your mind go, you realize not only is this big truck tiny, but the mountains themselves are mere creases on our globe – and our globe a mere dust speck in the galaxy. Surprisingly, this realization can have a nourishing effect on your frazzled soul. Like the truck, your problems begin to shrink. Everyday concerns appear fleeting among these towering peaks and ancient forests. Breathe deep. This is the stuff of which a rich life is made. 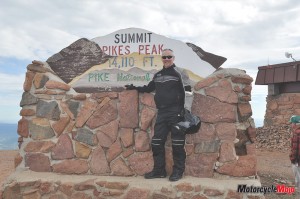 In Rocky Mountain National Park, I met up with a lifelong friend who had moved to Colorado Springs several years before. Riding Trail Ridge Road, we stopped at the Alpine Visitor Center, and stood in silent awe at the high meadows that dropped steeply away and at the jagged rock spires beyond. I don’t know exactly when Julie Andrews began singing The Sound of Music in my head, but here I almost expected her to come dancing across the flowered tundra. We hiked the short Alpine Ridge Trail to an elevation of 3,660 m, and I wasn’t bothered at all by the lack of oxygen – until we tried to talk! We stopped for air and a July snowball fight, and suddenly looked up to see a herd of elk grazing right in front of us.

I had looked forward to riding up Old Fall River Road, which, until 1932, was the only motor route to cross the park. It remains a narrow gravel road with multiple tight switchbacks, steep slopes and no guardrails. I found the old route enjoyable, although it would have been improved by the absence of several cars moving so slowly that we were almost falling over. Also, the road led mostly through dense forest and offered nothing of the sweeping vistas of Trail Ridge Road. While exploring those breathtaking (in every sense) views, we enjoyed very close encounters with yellow-bellied marmots, bighorn sheep and, as mentioned, large herds of elk. We were just as pleased that night not to encounter the bear that we were warned had been breaking car windows in our campground.

A True Wild West Town
The next morning, we broke camp and aimed our wheels south. Not wanting to come any closer to Denver than to hum a few of his greatest hits, we took Hwy 7 south from Estes Park to Nederland, then continued on 119 toward Golden. We skirted the city and skipped west to 67, a tar-and-chip country road that led us to Cripple Creek. Riding into town, we encountered first one burro, then another, and then another, strolling about freely. Two local girls feeding one a carrot explained that the burros are wild but wander into town for treats, adding that once a year, donkey races are held on Main Street. Established for its gold mines, Cripple Creek was once a true Wild West town, complete with saloons, casinos and shady ladies. The most obvious remnant is the casinos, and we stopped for lunch at one called Maggie’s. (I recommend it!) I wanted to work on my off-roading skills, so after a fine meal, I bid my friend farewell and set off on Phantom Canyon Road past a modern gold-mining operation south of town.

Unplanned Detour
I selected this route, as it was the easier of two unimproved roads I could take to Cañon City. Eight kilometres in, however, I came to an unwelcome sign: “Road Closed.” No doubt the same heavy rains that had closed Mount Evans damaged this road. With some apprehension, I returned to Cripple Creek, took a deep breath, then set out on Shelf Road, which began at the road sign reading “4x4s and High Clearance Vehicles Only – Impassable When Wet.” It was a one-lane rutted road that was literally a shelf along a canyon wall for about 20 km. I’m pleased to say that by taking my time, I learned a little more about feathering the clutch in loose gravel and standing up on the pegs to to negotiate rough terrain – all without incident.

An Electrifying Ride to the Peak

In Colorado Springs the following morning, I was up before dawn. I wanted to summit Pikes Peak and be down again before noon. High-elevation electrical storms often form in the afternoon hours, and this year had been particularly “conductive,” with several lightning fatalities in and around The Peak. At 4,300 m, Pikes Peak ranks 31st among Colorado’s 54 “fourteeners” (peaks higher than 14,000 ft.). The road to the summit is so steep that riders are advised to have at least a half tank of gas before making the ascent; while it is only 61 km, you will consume more than twice the usual amount of fuel. The twisting road was paved and in excellent condition, but the wind made me extra cautious of the tarmac’s edge. And knowing the axiom that you will ride where you look, I resisted the urge to gaze out at the spectacular views. I did, however, stop at several pull-offs to absorb the panorama and the serpentine road coming up the mountain below me. As I wound my way along the mountainside, I realized that racers in the annual Pikes Peak International Hill Climb are a different breed. The road has a series of switchbacks, called “the Ws,” for their shape on the side of the mountain.

The Ws can be treacherous at high speed, and one minor miscalculation would be your last. Indeed, the previous month, Carl Sorensen, a seasoned motorcycle racer from Colorado, plunged to his death while practising for The Climb. At the summit, I watched as the world’s highest cog rail train pulled up to the platform. While it was a calm, warm morning in the Springs 2,400 m below, at the peak, the temperature dropped to 4 C with powerful winds. Unprepared visitors in shorts and T-shirts stepped out of the train and quickly began to hold themselves, looking a little blue around the lips as they made a dash to clog the aisles of the gift shop. Photo Op Wanting to get some photos of the many motorcycles riding the mountain, on my descent I followed a father-daughter duo, snapping photos on the fly. She was wearing a helmet painted in the Stars and Stripes – a particularly appropriate lid for touring “America’s Mountain.” Perhaps I was tailing a little too closely, because, about halfway down, they pulled over to let me pass. I stopped too, however, and after meeting them, told them I had pictures of them cruising Pikes Peak. They eagerly scribbled their email on a scrap of paper so I could send them their photos when I got home.