When I was younger I would daydream about the Dakar Rally. I would rush home from school and watch the Dakar or any other motorcycle movie I could get my hands on at the time, with my parents and dream that one day I’d be doing this type of disciplined riding. In Grade 6, I even wrote my speech on the history and evolution of the Dakar. That was the only time I had gotten the best mark in my grade for public speaking. Not surprisingly, as the years went on and reality set in, I realized this would not be an easy venture to tackle.

But the Dakar isn’t the only serious challenge. Throughout the years, we’ve seen many extreme trials come about: from the Baja 1000 to the Orange Crush Rally, Romaniacs and the Erzberg Rodeo in Austria. While mostly suitable for professional riders, some of these challenges are offered to experienced enthusiasts to test their abilities and have a glimpse of what some more serious challenges may look like. The BMW GS Challenge is one of the only challenges where recreational riders can test their riding and navigational skills in a two-day event. The winners then move on to a world competition. 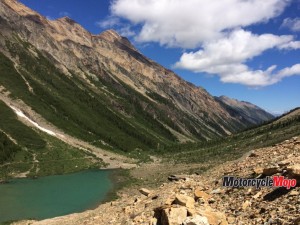 Another challenge for the everyday rider is the Horizons Unlimited Mountain Madness (HUMM), which had its North American debut during the summer of 2016 and is geared toward the regular motorcyclist wanting to challenge his or her navigational and riding skills. Originating in the Spanish Pyrenees in 2007, this event has been running ever since in various parts of the world. The challenge features different classifications for riders based on single- and multi-cylinder engines, and GPS or map and compass categories.

Some may be familiar with the organization known as Horizons Unlimited (HU), an international hub for motorcycle world travellers and enthusiasts. With gatherings in various countries throughout the year, its goal is to bring people together and share the potent desire that urges us to throw a leg over a bike and ride. Canadians Susan and Grant Johnson started HU in a roundabout way. Leaving home in 1987 on a BMW R80 G/S, they spent the next 11 years travelling around the world by motorcycle, and once the Internet took off, they began sending emails back and forth to their loved ones. They then discovered that a website could be created and their stories could be accessed and read by anyone using the Internet. In doing so, they inadvertently set up the base for the extensive community that now has followers from more than 150 countries. Since the website’s founding in December 1997, HU has grown into a main hub for many thousands of motorcycle travellers around the world to become inspired, ask questions and give advice.

The first North American HUMM challenge took place in the heart of the B.C. Rockies. Based out of Panorama Resort near Invermere, this two-day challenge saw riders gathered in teams of two to four riders, ready to test their wits, teamwork and skills. HU worked closely with Wanduro, a group of riders focused on minimalist off-road exploration, to set up tags and map the routes for the HUMM Rockies.

As soon as I heard of this event, I decided to give it a go and see how it worked. I had been on the lookout for a partner for quite some time, when one day at work I was sharing this story with my boss, Daniel, about how I wanted to enter this challenge but couldn’t find anyone to ride with. He immediately said, with great enthusiasm in his quirky Australian accent, “Oh, Em, I’d love to ride with you!” Although at the time I wasn’t formally inviting him, I was happy to have him as a riding partner. I would be riding a KTM 500 EXC and Daniel would be on his KTM 350 EXC. 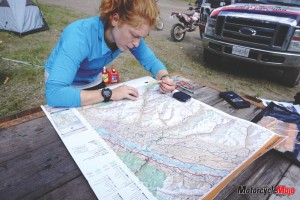 We arrived at the HUMM challenge, set up camp and registered for the single-cylinder map class. As we awoke the next morning, we could feel the energy among the riders as they prepared to start their first day and plan their routes. The seconds counted down to when the riders could receive their maps and waypoint descriptions so they could get on the road. Once we received our maps and began planning our route, it became immediately apparent that my and Daniel’s map and compass skills might have not been the most up to date. “Although they can’t be worse than everyone else’s, right?” we thought. During the ride, we had to gather tags at waypoint locations that were determined by the level of rider skill, ranging in complexity from 1 to 5 (with 1 the easiest, 5 the hardest).

We decided to head out for some 2s, 3s and 4s and see how we faired. Daniel and I quickly planned out a route for the day and thought it’d be best if we just hit the road and see what came naturally. As the flood of riders dispersed through different routes, we found ourselves alone, navigating through forestry roads and old 4×4 trails to find our tags. Some waypoints were obvious and easy to get along the way; others required a hike and turning over rocks or searching old cabins to find a tag. 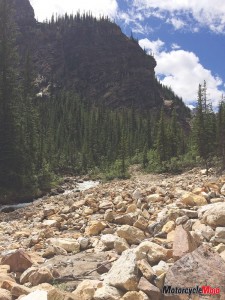 As we made our way back to base, we attempted to get one last tag before the end of day. Riding up a beaten track with switchbacks, we made our way to the top of a mountain where the trees opened upon a vast view of peaks for as far as we could see. It was hard not to stop and take a moment to realize what we were really accomplishing, but about five minutes later, we remembered that there was a deadline that we had to be back for, or else our points would mean nothing.

We made it back just as the deadline hit – and may have even lost a few points for our tardiness. Feeling a mix of mild disappointment and bliss from a great day of off-road riding and from the number of tags we had actually picked up compared with what we had planned, we drank beer and enjoyed hearing the stories of the day from other riders. At the end of the first day, Grant posted the standings, and to our surprise, Daniel and I had actually come in first in our category!

Throughout the first day and the introduction dinner from the night before, we kept hearing whispers of the incredible tag number 222. This was the hardest one to get to, and Daniel and I decided we would make this tag our goal for the second day. We heard it was slightly treacherous at times and was a little hard to find. With tag 222 in our sights, we had made our way into the middle of the wilderness, knowing that we were at least going in the right direction. We had stopped at a fork in the road to check our map when a group of four riders rode past with a sense of certainty – common sense would of course dictate that just because they looked as though they knew where they were going, it doesn’t mean they actually did. Daniel and I both fell for their confidence, however, and decided to follow. We soon found ourselves in the middle of a 1.25-metre-deep river crossing, only to get to the other side and realize that it led absolutely nowhere. The worst part was having to go back across once it was rutted out from our first crossing. Once we were back, we decided to take the higher route, based on the probability of less wetness.
We wound our way up the barren mountainside on what looked to be a hiking trail, and found ourselves riding through rock fields and rivers. As I struggled to get the 500 through the largest rock field, we passed a KTM 1190 Adventure, the rider looking calm and collected, as if he had methodically planned out the route and every aspect of it. The old-growth trees eventually faded to alpine elevations and we spotted a lake at the base of a large bowl; the water was crisp and untouched, and held a pristine blue clarity. We somehow knew this was the place.

A Zen State of Mind

Once we arrived, an overwhelming sense of serenity and joy came over us. We had made it. This mystical, wild place allowed us to be engulfed in its absolute beauty. As we sat and took in the sun and crisp breeze this place offered, the rider with the 1190 that we had passed earlier rode up. We congratulated each other, shared the experience and soon found out that this cool and methodical rider was actually just very hungover and had struggled the whole way in.
It soon sunk in that we weren’t actually at the waypoint yet, as it was halfway up the basin wall, accessed by a goat trail covered with shale and snow. I volunteered to go and retrieve it for everyone, given it wouldn’t be easy to get more than one bike up at a time. I climbed through boulders and over shale, and had to stop when I came up to a large section of snow. I walked across and got the waypoint, but I had to stop again – this time to take in the immensity of this mountain that we had made our way onto. I looked down upon my friends, who were now ant-size at the bottom of the bowl. Unfortunately under a time frame, moments like this don’t last a long time, so I walked back to my bike and started making my way down.

I was a quarter of the way down when I hit a rock that deflected my front wheel off the goat trail; now pointing down, I was facing the very steep shale slope beside me. Knowing that I wasn’t strong enough to pick up the bike and continue on the trail, I figured the path of least resistance would be my new route, and thanks to my vast amount of mountain bike experience, I realized this was my best option. I came down bouncing off boulders and bashing through bushes, but I finally made it back to the group and carrying a new appreciation of my riding ability.

Making our way back to the main logging road, we still had a few hours to retrieve some more tags before the event ended. We ended up riding almost every logging road offered to us. We handed in our waypoints and waited patiently for the final tally to see how we had done overall. Among the awards for most waypoints in each category, there were also awards for the oldest motorcycle ridden in the event, most breakdowns (one rider performed a full top-end rebuild on the roadside) for double-up riders; an award was also handed out to the first all-girls team to attend the challenge. Daniel and I ended up getting third place for our category. Although this was fantastic, the experience itself was more than enough reward.

Overall, this event was absolutely incredible and well organized, as most HU events I’ve attended have been. A large variety of rider groups and skill levels had participated. We saw everything from XT250s from the ’80s to brand-new 1190 Adventures and even a Moto Guzzi Stelvio. Some riders were competitive, while others were there just for the experience.

Panorama Resort offered options for accommodations and great meals throughout the stay. I urge any rider to partake in this event based purely on the captivating experience you’ll receive and incredible people you’ll meet. HU even offers a day of off-road skills training through Touratech beforehand to familiarize yourself with techniques and tricks for riding dirt; this is great for those who may be hesitant about the terrain.

This year’s HUMM will take place in the Canadian Monashees near Nakusp, B.C., from July 28 to 30, and you can register at horizonsunlimited.com/