When I first started riding a few years back, I made a conscious effort to be aware of the other drivers on the road. We see them all the time – texting or talking on the phone, twisting and turning to check on their kids, turning without signalling – you know the ones I’m talking about. To this day, my eyes are constantly scanning for those with little regard for their own safety or the safety of others. 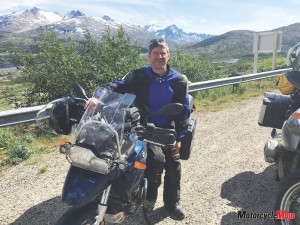 The other danger on our roads is, of course, those that aren’t even aware that they’re an obstacle. These are our furry friends, either domestic or wild, that we share our roads with every day. Last summer, I had the misfortune of watching my good friend and riding partner collide with a moose while riding right in front of me. I’m hoping this story will remind you all of the dangers of the road. Here’s our story.

A few years ago, the age of 50 was creeping up on me. As a lot of you know, this special number makes you reflect on your life and what you’ve done with it. One rainy Saturday evening, I was sitting with my family and watching a movie called Wild Hogs. During the movie, I yelled out, “That’s it! I’m going to get my motorcycle licence!”
First thing that Monday morning I was in our local government agent’s office picking up the materials to obtain my motorcycle licence. While I had ridden a dirtbike as a kid, I had not ridden for a number of years, but the excitement brewing inside me was overwhelming. 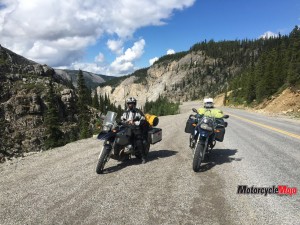 Within a few short weeks, I had purchased a brand new Honda Shadow from the local dealership and had contacted an old friend back from my 20s and asked him to be my mentor. I knew Darren very well and he had more than 30 years of riding experience, so I felt confident that I was in good hands. After several rides with Darren and with my motorcycle safety course under my belt, I was ready. After passing my road test, I really felt like a kid again as I rode my new machine up and down the streets of our small town.

Another Change in the Works

I rode the same streets for a number of years, but then longed for something more: more excitement – more adventure. A friend of mine told me about her BMW adventure bike, and the research began for my new ride. I eventually found my new companion in a used BMW F650GS that fit me well (I am somewhat vertically challenged). Shortly thereafter, my wife and I were having dinner with friends and I just had to tell them about my recent purchase. Across the table I could see my friend, Andrew, and his eyes went wild with excitement. “You bought an adventure bike!” he screamed. “Indeed I did,” I quickly replied, as I was only too happy to provide more details. Andrew told me then that he too had been considering a similar purchase, as he wanted to travel by motorcycle to the Yukon and Alaska. With that, our brains were churning with dreams of making this trip a reality. 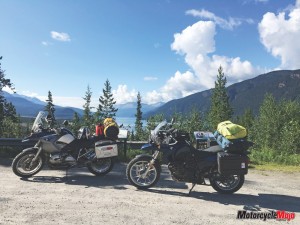 Andrew bought a brand new F800GS, and over the next few months, we ventured out on many local back roads with new-found friends from our Facebook Adventure Bike Group (NWBC Adventure Bike Group). We learned a lot from these experienced riders, as many of them had been riding for years.

On Canada Day last year, Andrew rode his bike to my house, where I was packed and ready to go. Our bikes were gleaming and packed with all kinds of gear that we likely didn’t even need. Having kissed our wives goodbye, we jumped on our bikes and started on what was supposed to be the trip of a lifetime. Day one was fun and and exciting, but uneventful in the sense that nothing happened. We were two guys at the age of 50 (and then some) heading out on the open road leaving behind all sorts of responsibilities. I can still feel the exhilaration I felt that day. We rode about 500 km and were lucky to find a great little motel with good parking for the bikes and a restaurant on site.

No need to dig into that freeze-dried food just yet. We met a couple who was staying at the same motel. They were riding shiny Harleys – we traded compliments on each other’s bikes and our new friendship grew from there. We were heading in the same direction, so we decided to ride together in the morning for the first leg of our trip. The next day was chilly in the morning, but not so cold that we needed our heated gear. At about 10 a.m., the sun began breaking through and we started to see the world come alive as the sun shone on the Stewart-Cassiar Highway (Hwy 37). My heart pounded as I rode past a bobcat on the side of the road that glared at me. “Nice kitty,” I said as I roared past. We stopped at the Dease Lake gas bar to refuel the bikes and ourselves. We had hoped to get to Watson Lake by the end of the day and we were well ahead of schedule.

Just before noon, we were about 50 km north of Dease Lake. We were riding in formation, with Andrew in the lead and our two new Harley friends directly behind me. As I came over a hill, I was enamoured with the beautiful scenery, and to add to my excitement, a moose was coming out of the ditch right in front of us! I watched in slow motion as the moose ran alongside Andrew, but I couldn’t tell whether he could see it in his peripheral vision. Mere milliseconds later, my buddy saw the moose and tried to avoid the collision, but it was too late – they collided. It all happened so fast – there was really nothing he could have done to avoid the crash. The bike and Andrew slid along the asphalt and the moose had collapsed onto her knees as I approached. As I got off my bike, the moose and I shared a moment, and I will never forget the look she gave me.

We were merely a few metres apart and her eyes were dark with fear – as were mine, I’m sure. I know that she was just as terrified as I was at that moment. She then stood up and ran into the ditch on the other side of the road. Andrew was unconscious but he was alive. Our two friends were on the scene right away. They both had industrial first-aid training, and without them, I shudder to think of how the next few minutes would have played out. I was in a state of shock as I frantically dialled 911 on our satellite phone to no avail; the sat phone had good reception, but unbeknownst to us at the time, 911 was not available in this part of the world. Help Arrives in Many Forms To say that the stars were aligned that day would be an understatement. Within a half-hour, several people had stopped to assist. One rider heading south told us he would stop in Dease Lake and notify the ambulance. A woman with her daughter helped direct traffic around the crash and assisted our friends in making Andrew comfortable.

A medic travelling from the U.S. stopped and took control, running Andrew through some tests, checking for broken bones and determining he had a very serious concussion. Over and over Andrew was heard saying, “Where’s my bike?” and “Is our trip over, Johno?” I’m sure that I had heard these phrases at least 40 times within the hour that we were sitting on the ground together. We knew that we were blessed when he was sitting up and making jokes with the crowd that had gathered now around him. As they rolled him into the back of the ambulance, Andrew gave me the thumbs-up, trying to reassure me that everything would be okay. I wasn’t convinced. I packed up my bike and followed the ambulance back to Dease Lake while the others stayed and waited for a tow truck to come and pick up the bike. The ride to the hospital was likely the most terrifying ride of my life.

I couldn’t get the thought of the collision out of my mind. I kept my eyes peeled, scanning the road in front of me and scanning the ditches from side to side. If you’ve ever ridden this stretch of highway before, you know that the canopy of the luscious green growth casts shadows over the ditches, hiding what might be lurking. I didn’t dare check my speedo to see how fast I was moving that day – eyes on the road at all times! The Right Kind of Doctor Again we were blessed with more good fortune, as the doctor in Dease Lake just so happened to be from a Vancouver hospital’s ER department up in the north providing a locum service. He ran Andrew through a series of tests, and we were all relieved to find that his injuries were limited to a fractured wrist, a sprained ankle and the severe concussion (thank goodness for quality riding gear).

One RCMP officer had told me that you seldom hear the words “collision” and “moose” in the same sentence without hearing the word “fatality.” They had arranged for air transport to a larger hospital in Whitehorse, where Andrew was released the following day. I fear that without those great people who crossed our path that day, the outcome of this story would have been different. I had chosen to carry on with the trip on my own. We were to meet a friend, Max, in Whitehorse, but after meeting up with him, I decided to cut the trip short – it wasn’t the same without my riding buddy by my side. Andrew’s bike was totally destroyed, but he is shopping for a new ride. We hope that we can try again next year and make the whole trip.

Every day we learn lessons in life. Andrew and I only had a few years of riding under our belts. We were on an ambitious trip, considering our experience – or lack thereof – but that’s what life is all about (if you are not yet 50, you will understand some day). We want to share our story so that others can learn from us. When travelling the back roads, it’s not only the other drivers who you need to be concerned with, but also God’s creatures that share this great place called Earth with us.