Experience has made the author ideally suited to help others

Did I mention that I’ve had cancer twice? Well, there you go. As such, I have a particular interest in raising money for research and spreading the word on early cancer detection, especially because both times I was diagnosed, I had no, or didn’t recognize, any symptoms. Had I not been diagnosed through regular testing, I wouldn’t be bringing you all of the semi-professional entertainment you’ve come to enjoy over the past few years. At any rate, I’ve participated in a number of riding fundraisers over the years, but one eluded me thanks to its relative exclusivity – the Distinguished Gentleman’s Ride (DGR).

Stylin’ on a Unique Ride 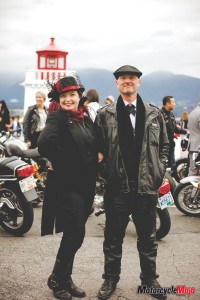 Since September 2012, what has set it apart is that it requires distinguished gentlefolk to don their most dapper threads and straddle their classic, custom and vintage-styled motorcycles to raise funds and awareness for prostate cancer research and, since 2016, for men’s mental health issues.

“What’s with all the dapper-ness?” you may well ask yourself. Well, a fellow in Australia by the name of Mark Hawwa was inspired by a photo of actor Jon Hamm, in his role as Mad Men’s Don Draper, astride a classic bike. Hawwa decided a similarly themed ride would be a great way to combat the often negative stereotype of folks on motorcycles, while connecting niche motorcycle communities together. And in the Internet age, the idea took off in country after country.

Dapper Is as Dapper Does 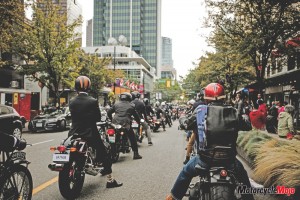 So, you may say, “Hey David G., you’re as dapper as a diamond in a goat’s butt. How is it that you haven’t done the ride?” Excellent question (and a fine observation). Yes, I am dapper, but for some reason my filthy V-Strom didn’t qualify as a classic, custom or retro-classic. It was just considered filthy. I mused about this one day while chatting on the phone with amiable sales rep Andrew Carroll at Vancouver’s Trev Deeley Motorcycles (which is celebrating its 100th anniversary in 2017). He said, “Let me call you back in an hour.”

Sure enough (because I was counting the minutes), Carroll called back an hour later. “I talked to Darwin Osarchuk, our GM. Why don’t you come by on Friday and pick up a new Heritage Softail Classic. Just bring it back on Monday.” Jumping Jupiter, it was like Christmas in September! As easy as that, I had a motorbike that would qualify me for the DGR. And I never questioned the irony of someone named Darwin working at a motorcycle dealership. 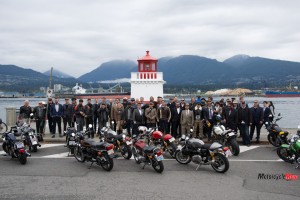 I quickly ran over to Rocket Fuel Supply Co. and spoke with Jeff Chung, co-host (along with Mike Kehl) and one of the sponsors of the Vancouver ride. Chung steered me toward a totally dapper three-quarter helmet in silver sparkle with a simply spiffing black racing stripe. It was the last thing I needed for the ride.

September 25 dawned slightly rainy, but the big screen on the Softail kept my tweedy-self dry on the brief ride along Highway 1 to the morning’s meeting site for the kick-off. Fortunately, the rain stopped and we had a good ride (no one died, though an old Triumph coughed a lot) through 70 km of city streets with stops to regroup and rest at Stanley Park and the University of British Columbia. The ride wound up at Rocket Fuel Supply HQ in Burnaby.

About 200 riders raised some $10,000 for the Vancouver ride. People like Jacqueline Robins, on a vintage Honda that she wrenches herself and whose father had prostate cancer, and Mark Halpern, also on a self-wrenched vintage Honda, were a pleasure to meet. His grandfather had prostate cancer. In fact, many of the riders had a connection to cancer, but some were just out to help raise money and enjoy a good ride on cool bikes.
In all, more than 50,000 riders in 90 countries raised almost US$3.7million in 2016.

I hope that this year I’ll have my own classic worthy of the DGR, and another day well spent.