Let’s face it, most adventure-bike riders use their bikes for touring, commuting or exploring dirt roads, rarely taking them truly off-road. And there’s nothing wrong with that; adventure bikes are powerful, they’re comfortable and their long-travel suspensions are better suited to deal with broken, pockmarked pavement than any naked, sport or sport-touring bike.

However, there is a small percentage of adventurers who do dare take their big bikes where only 250 cc dual-sport bikes should go. Some hard-core riders don’t hesitate to take bikes like the gargantuan BMW R1200GS Adventure off the pavement and onto technical, single-track trails or up steep, rocky hillsides, or to even use them as oversized trials bikes. And in the right hands, the big bikes are very capable off-road machines. But they are a lot of work to manhandle in the tighter, rougher stuff. Serious off-road adventure bike riders do have other big-bore options, including the Honda Africa Twin introduced last year, and now the new KTM 1090 Adventure R tested here.

Although KTM makes some true street-oriented models, its specialty is making off-road bikes. The Austrian company already had a few potent adventure bikes in its lineup last year: the 1290 Super Adventure, the 1190 Adventure and the 1190 Adventure R. However, the two non-R models were better suited for the street; it’s the R model that was equipped with the 21-inch front and 18-inch rear wheel combination that facilitated serious off-road riding. The R also boasted 150 hp, which is really overkill when throwing a roost off the rear tire, and it cost more than $18,500. 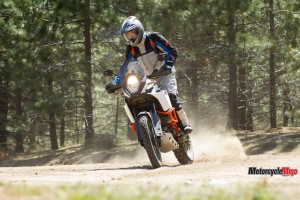 KTM has reshuffled those big adventure bikes for 2017. There’s an all-new 160 hp 1290 Super Adventure R (which now has off-road wheel sizes) for riders who want to use the rear tire like a Gatling gun, and for more sensible riders who are also on a tighter budget, there’s the 1090 Adventure R,  which replaces both 1190 models.

Its 1,050 cc V-twin is a destroked version of the 1190’s engine (63 mm versus 69) with a 2 mm smaller bore, at 103 mm, and it uses a mix of parts from different KTM twins, such as valves from the 1190/1290 and cams from the European 1050 Adventure. It produces 125 hp and 80 ft-lb of peak torque, and includes four ride modes (Sport, Street, Rain, Off-Road) that adjust throttle mapping and limit output for the different riding environments. It also has switchable and adjustable traction control. KTM left out the cruise control and tire pressure monitor found on the 1290, and uses simpler traction control and ABS systems, neither of which is lean-sensing. The ABS is not linked as on the bigger bike, but it does include an off-road mode.

The chassis is tuned for serious off-roading, with 21/18-inch wheels that sport tubeless Continental TKC 80 knobby tires. To reduce the risk of a flat at the launch event here in Temecula, California, our hosts installed inner tubes, though I question the logic behind that move – it’s easier to repair a puncture on a tubeless tire, unless it’s a tire-destroying slash, in which case it wouldn’t make a difference whether there was a tube or not. And it wasn’t because they ran particularly low pressures, since we’re told the tires were set to 32 psi. WP provides the fully adjustable suspension, with 220 mm of travel at both ends, though unlike the 1290, changes are made manually, not electrically. 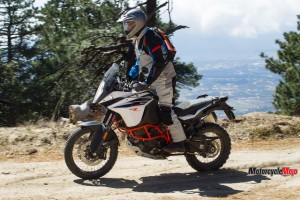 We picked up the test bikes at KTM’s North American headquarters in Temecula and headed out on a two-day trek. We’d be spending the night at a camp at Chaney Ranch, an off-road riding and training facility in Warner Springs that’s about an hour from Temecula as the crow flies, but about a day away by our route. The folks at KTM weren’t kidding when they said we’d hit the dirt almost immediately – after leaving the parking lot, we rode on pavement for about 150 metres before turning onto a gravel road that led to a series of trails.

The 1090 comes fitted with crash bars, but if you plan on going deep into the woods, you should add the optional aluminum skid plate to avoid those dreaded adventure-ending crankcase punctures – our test bikes had the skid plates. Wider accessory foot pegs were also installed, since about 80 per cent of our ride route was off-road. With a seat height of 890 mm, the bike is tall, but the suspension squats considerably when seated, making reaching the ground easier. At six feet tall, though, I’m still on my toes. The riding position is more like a dirtbike, with low-mounted foot pegs and a high-rise handlebar that helps stand-up riding, which is the riding position we used most of the day. At my height, I’d consider a set of accessory risers to raise the handlebar about 25 mm, since I started to feel my lower back strain from bending over for so many hours. 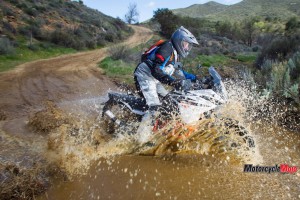 The only features that give away the 1090 as a big bike are its wider midsection between the knees and, of course, its 207 kg dry weight, which is 3 kg lighter than the 1190 it replaces, and 10 kg lighter than the 1290. Despite its heft, it handles remarkably well when the pavement ends. Throttle modulation in Off-Road mode is easily managed, and this mode also lets the rear tire spin up considerably before the traction control intervenes, allowing nice long slides through corners, and easing steep uphill climbs. An accessory dongle was plugged into the bike that allows you to turn off the ABS (which I found no reason to do), and maintains mode settings rather than defaulting to standard when the ignition is switched back on. A reminder that the dongle is plugged in is a “Not Legal” message that flashes in the dash display when you switch on the bike.

A large portion of our route took us along sandy trails, and sand isn’t my preferred surface texture. Neither is it the preferred surface for the TKC 80s, which handle commendably on hard-packed and rocky terrain, but return vague feedback and sketchy traction when things get loose. Despite this, I charged along at a reasonable pace on the loose surface, with only a couple of eye-opening front-end slides. I also discovered that my sand riding isn’t all that bad; previous rides on the stuff in Namibia and Mozambique have instilled in me the proper body language, as well as the reflex of gassing it instantly as soon as the front end gives. On hard-packed gravel roads and tighter trails, the 1090 feels more like a big dual sport than an adventure bike. Its suspension soaks up most bumps and rocks effortlessly, though the fork did bottom with a loud clunk a few times when riding over wider rainwater ruts that were gouged across the trail.

Day two began in sub-freezing temperatures, which prompted me to raise the adjustable windscreen by simply releasing two levers and lifting it. The taller height cut most of the wind from my torso until temperatures warmed up and I dropped the screen for more ventilation.

From Trail to Canyon Carver

We rode mostly on pavement on the second day, along very twisty canyon roads, and the 1090 surprised again. Despite its larger wheel sizes and soft, off-road suspension, we maintained a pace that would make sportbike riders sweat to keep up. The 1090 is not a hard-charging, trail-braking kind of bike, but if you maintain your momentum, it flows through esses quickly and without wallowing. It’s only on tight turning transitions that you feel the bike’s height, as you arc high above the pavement coming out of one lean into another. In Sport mode, the engine pulls hard in a linear manner, and just keeps pulling hard until well into the triple imperial digits on our U.S.-spec machines.

The addition of the 1090 Adventure R to KTM’s lineup now better fills the gap – both in price and performance – between the 690 Enduro dual-sport bike and the power-be-damned 1290 Super Adventure R. Its closest competitor is the Honda Africa Twin, which costs $400 less and, on paper, looks to be at least as serious an off-road machine as the KTM, though I haven’t ridden it yet and can’t offer a comparison. The KTM is more nimble off-road than the R1200GS, though the BMW has the edge in on-road performance and comfort. The BMW model that probably most closely resembles the 1090 Adventure R in off-road performance is the discontinued HP2 Enduro, which was a limited edition special that was a very capable big dirtbike, but was a compromised road bike. That’s not an issue with the 1090, which sacrifices very little in on-road ability in return for exceptional off-road performance. And now, it’s more affordable as well.