An evolution of life and family in the Badlands

As I ride east across the prairies in southern Alberta, the road opens into infinity across a quilt of green and gold, melding into a brilliant blue and endless sky. My mission on this motorcycle adventure was to go back in time and follow the trail of my ancestors after they’d arrived in Canada as refugees in the 1920s. I hadn’t expected to go back 75 million years – to when Alberta was covered with lush jungles and shallow seas, and dinosaurs ruled the planet.
Ninety minutes northeast of Calgary, sculpted valleys worn smooth over time interrupt the flatness. More than 10,000 years ago, glacial flood waters cut a wide swath across today’s plains, carving the Red Deer Valley and exposing millions of years of evolution. The transformation that begins subtly quickly becomes dramatic as you descend through striated land formations into prehistoric times. Referred to as Dinosaur Valley, this two-by-28-kilometre stretch in the heart of the Canadian Badlands is named for the rich deposits of dinosaur bones discovered here. The same geological forces that compressed millions of years of history also created rich coal seams, drawing prospectors and entrepreneurs in the early 1900s. The Town of Drumheller was incorporated in response to the population influx. 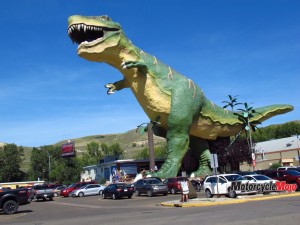 The first places my grandparents called home had respectively been north of Saskatoon, Sask., and in the Peace River Region of northern Alberta. The families then moved south, trying to make a go of it on their own land, Mom’s near Michichi, 30 km northeast of Drumheller, and Dad’s near Namaka, about 100 km southwest.
I’d already ridden more than 5,000 km in just over two weeks and was ready to slow down for a few days. The natural forces that carved the valley set the stage for prime motorcycling roads, so I’d planned to establish a base camp for six days, ride the area, explore my family history and take in what I’d learned so far. I was also intrigued by what other riders had described as a magical place.

As I rode into town, the touristy feel tempered my initial awe, with kitschy dinosaur replicas on street corners, and the iconic creatures emerging from billboards, restaurants and other establishments. With its population of 8,029 (2011), I’d expected something a little more quaint and intimate. But the commercialism is understandable; the small town welcomes more than 375,000 visitors per year, drawn by the fascinating history and unique topography.
One thing that’s genuine is the Alberta hospitality and hometown feeling consistently extended by the town’s people, something all those visitors can’t deter. Even the garishly painted dinosaurs become quirky and entertaining.
My first stop in a new place is usually the visitor’s centre, in this case also the home of the world’s largest dinosaur. Most people come in asking questions about dinosaurs, not motorcycle routes, and those I spoke with really couldn’t answer anything outside the scope of their canned presentation. The only contribution they could make regarding scenic roads was to highlight the dinosaur routes on the tourist map. If anything, it was a good starting point, but fortunately I’d had plenty of recommendations from other riders. 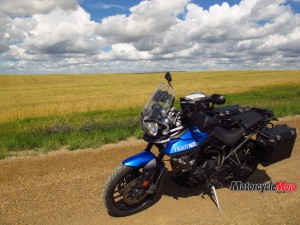 Motorcycle trips invoke incredible serendipity in ways you can’t imagine, like my experience on the way to Drumheller. After his father died in northern Alberta when my dad was two, his mother moved them 800 km south to the nearby town of Beiseker (pop. 785). I had no idea where they’d lived, but stopped to see if I could find out. All I had was the name of the family where my grandmother had worked as a housekeeper for two years before remarrying.

In the course of asking questions and following leads, I was directed to contact Leah Uffelman, a lifelong resident who’s on the board of the Beiseker Station Museum. She didn’t have a lot to add to what the town clerk had already told me, but when she found out I was on a motorcycle and headed for Drumheller, she insisted I contact her daughter Verle-Ann, who lived there, because Verle-Ann and her boyfriend, Alvin Gerodo, were riders. When I did, it was as though we’d been friends forever. Alvin shared some of his favourite roads, and the next day I was off to check out a 200 km loop he’d recommended.

Sightseeing Ride
From Drumheller, I followed Highway 56 south to the town of Rosedale, stopping to view the 117-metre Star Mine Suspension Bridge. With a little imagination, you could see the coal miners trudging to work on the other side. For almost 20 years before it was constructed in 1931, they had to cross the river in rowboats to get back and forth to their job.

Continuing south on Hwy 10, the road hugs the bank of the Red Deer River and bends gently as it follows the contour of the valley. Immersed in the magic and history of this place, you ride between hillsides exposing the life that was here eons ago. The road becomes Hwy 570 and, just before the hamlet of Dorothy, climbs up out of the valley and turns east.

The landscape here is flat and covered in farm fields, giving no indication of the buried treasure so openly visible only a few kilometres earlier, though the Sheerness Generating Station, fuelled by coal taken from two open-pit mines, reminds you again. Coal tumbles from a gigantic conveyor to form huge storage piles destined to fire the generators. My maternal grandfather had described riding his horse 17 miles (27 km) across the frozen fields to work in an open-pit coal mine all winter. Although I’ll never know if this was his destination, it was in the right vicinity. 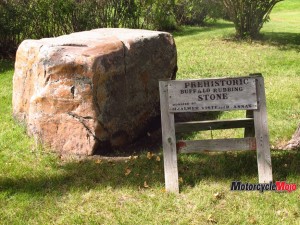 Now, many of the miners live just north in the town of Hanna. The Hanna Pioneer Village & Museum is filled with period artifacts, displaying the way of life typical of when my family lived there. A buffalo rubbing stone stands guard outside the office entrance. I’d never heard of a rubbing stone before, but learned the surface is smoothened and polished by generations of bison rubbing against it to remove winter coats or scratch an itch from insect bites. The stones were scattered across the prairies, but most were removed while clearing land for cultivation.
Despite me being on-site during posted hours and walking around knocking on locked doors, I couldn’t rouse anyone. Only when I was preparing to leave did a young man and woman appear, but by then I was on my way.

I headed west on Hwy 9 as far as the turnoff to the little village of Delia. Back in the day, the carefully restored wind-powered mill had pumped water, ground grain and powered a lumber saw. As fascinating as it was, it was the profusion of bright pink and fuchsia petunias throughout the sleepy streets that caught my heart. My grandfather loved the flowers and always filled his Ontario garden with them. Their Alberta farm wasn’t many kilometres away, and I wondered if the petunias had been here when he was.

Although I didn’t need any reminders that he was with me on this journey, those petunias spoke volumes. Continuing south and eventually east, the landscape begins to undulate, then flattens for a while, running atop Dinosaur Valley before dipping back down and entering Drumheller from the north. The bridge into town is modern, but it still brought back the story of the January night in 1931 when my grandfather had to manage the horses, slipping and sliding across the ice-covered surface pulling a wagon carrying my grandmother, who was about to give birth. They made it, and the little baby, now my 85-year-old aunt, was born in the hospital. Dino Road With more roads to explore, the next day I rode west out of town on a 50 km loop aptly named the Dinosaur Trail, following the Red Deer River upstream along Hwy 575, cutting off at Hwy 837.

It had the same enchanted feeling I’d experienced riding southeast in the same valley. The topography was very similar, except there’s a river crossing, which the Bleriot Ferry shuttles you across on a short five-minute ride. The approach was very steep, but it made for great conversation with the other riders who were waiting with me. The ferry crossing was so smooth I didn’t know we’d arrived until vehicles started leaving. Highway 838 took me across more dinosaur country to the world-renowned Royal Tyrrell Museum of Palaeontology, where more than 40 dinosaur skeletons and 110,000 fossils are on display.

Carnivores and herbivores were mixed in the bunch, but I figured if I saw one of them coming toward me, I wouldn’t wait to see if it was vegetarian. This is another stop well worth making. The museum does an excellent job of compressing 75 million years of life into highly informative displays. When in the area, another must-see is the storied Last Chance Saloon in the community of Wayne. Once a booming coal mine town with a population of 2,500, only 27 residents remain. It’s an iconic motorcycle destination, and with plenty of space and room for camping, it frequently hosts motorcycle events. You reach it via Eleven Bridges Road in Rosedale, on a twisty paved road with 11 one-lane wooden plank bed bridges, in an area that could pass as a moonscape. The last two bridges are past the turnoff to the saloon, where the road becomes rough gravel.

Veryl-Ann and Alvin park their RV out there most summer weekends and had invited me for dinner. It’s typical of the hospitality that awaits solo riders. We’d also stumbled across more proof of the popularity of the place for motorcyclists. The Cavalry Arrives The 3rd C.A.V. (Canadian Army Veterans) Motorcycle Unit was having its annual motorcycle rally there. The CAV is made up of veterans and veteran supporters from across Canada, as well as Silver Cross families. They raise millions of dollars each year for veterans and veterans’ causes, as well as other charities, including the Ride for Dad. Not only have CAV members served our country in the military, they also continue to serve through their outreach programs.

Vice-President Mike Lacharite explained they’re the only veteran motorcycle organization that has a seat on the council of Veterans Affairs, and both Veterans Affairs and the Royal Canadian Legion regularly consult the CAV. The 3rd CAV’s members come from Saskatchewan, Alberta, British Columbia and the Northwest Territories. They support their local communities with events like poker runs or special projects, such as working with the city of Grande Prairie to support the construction of a noble Afghanistan monument. Every year, they gather at popular riding destinations to plan their year and strategize how they’ll raise charitable funds. This year, they chose the village of Wayne and the Last Chance Saloon, and that’s where I’d found them. And where I left them, strategizing, reminiscing and enjoying their camaraderie.

Drumheller and the Dinosaur Valley is indeed a magical place, with a landscape and roads that call to the motorcycle rider. The connection to the land and the energy of the place is extraordinary. Not only are you exposed to the elements, you’re also literally exposed to 75 million years of life, while being profoundly in the present. August can be hot, but with the likelihood of sunshine and dry weather, it’s an ideal time to visit. This entire route was on well-maintained, smooth, paved roads with gravel shoulders, but if you decide to deviate, know that much of rural Alberta is still networked via gravel roads, including some of the roads in small towns.