Hatton told us to turn off our traction control and ABS. He wanted to get a sense of where students were in terms of their abilities.

As some of you may know, I prefer to do things the hard way. That is, I prepare not a jot; no sir – it ruins the experience. What’s more adventurous than not having a clue about what you’re doing? But my off-road riding had shown me that it’s easy to get into trouble out there with 275 kg of bike and gear – plus me – all trying to go in opposite directions, at times, on very loose surfaces. And here in British Columbia, there are bears and cougars out there. And I tire easily. So, I finally decided to forgo my usual ignorance and actually try to learn something about off-road riding. 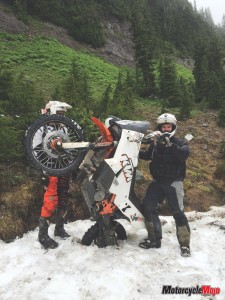 After some searching, I concluded that the cream of the crop were instructors who’ve been certified by BMW Motorrad in Germany. Now, Mojo’s own Clinton Smout is BMW-certified, and has a dandy school called Smart Riding Adventures over there in Ontario, but I’m over here in B.C., and never the twain shall meet, so I decided to look around here. I came up with a couple of names. Don Hatton [see a profile on Hatton in Sept/Oct 2015] runs a school on Vancouver Island called Off-Road Skills Canada that is serious backwoods off-road tough stuff that only the experienced and adventuresome young people would ever attempt – and me. But Hatton tailors the course to the most inexperienced rider in the group – like me. The rest of the group comes across as fairly experienced on their (mostly) big GSs. They talk of making plans to ride to Alaska or through South America. I’m unusually quiet.

It’s two days in the saddle, so we begin by practising proper stance (mine was not good), clutch and throttle control (mine was not good, as illustrated in the above anecdote), riding at a walking pace (I did it!), swaying slowly through cones using the pegs to steer, bumping through lumpy fields, and picking up your bike when the inevitable happens. Many of us fell, but it’s surprisingly easy to pick up a big bike once you know how.

Sadly, by lunch time my asthma was kicking up bloody murder due to the dust, rolling in grass and just everything possible that I am allergic to. And it was hot. My name is David G. Williams and I am not a He-Man. I had to bow out of the rest of the course and retire to my air-conditioned hotel room with ample doses of medicinal scotch and asthma inhalers. Hatton and his son, Kevin, checked in on me regularly by phone to make sure I was alive. They’re good people. 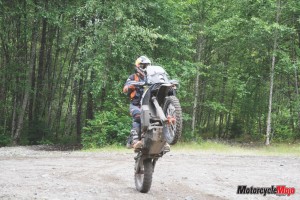 Day two of the program involves an all-day ride over a big mountain that’s far away, and which I would never have survived. However, over coffee that evening on his back porch, with a view of said mountain, I ask Hatton for a key take-away from the course. He tells me a story: “Let’s call this student ‘Doug.’ So Doug was coming down a gentle slope, at the bottom of which there was a sharp left. For some reason, as he neared the bottom before the turn, Doug applied a generous dose of whisky throttle and seemed to freeze, crashed through a wooden cattle gate, then into my parked 1200GS. There were some resultant injuries to both bikes, but forever more, that gate is known as Doug’s Gate. Do not crash into it. The lesson here is that the clutch is your friend and it will take a lot of abuse. Use it to control your speed if things go sideways.” What should I have done to prevent my first big off? Pulled in my clutch.

Even with only a half day of training, I’d learned quite a bit, so once I could breathe again, I was determined to try again.

I heard that Chris Birch was putting on a one-day clinic north of Squamish and cleverly finagled the secret meeting location out of one of the attendees, who gave me GPS coordinates. When I arrived at the abandoned ski lift in the middle of nowhere, I was the only one there. It was quiet. Too quiet. I started thinking about all those bears and cougars. Then I heard it…

A horde of KTMs (and one big GS) came screaming and skittering into the dirt and gravel area. There were wheelies galore, and much jumping of bikes off high ledges, suspension bottoming, rooster tails, a couple of falls, and general horseplay and larking. This was not the Germanic discipline of Hatton’s school.

Cream of the Crop 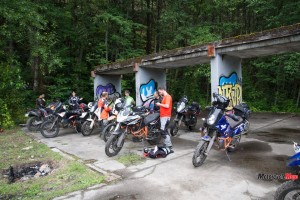 Birch is a young New Zealander (by way of Australia). He’s eight-times New Zealand Enduro overall champion and three-time Roof of Africa winner, and has been on the podium seven times at Red Bull Romaniacs. Birch has ridden and raced in more than 30 countries and has been in partnership with Red Bull and KTM since 2007.

He’s putting on clinics across Canada, New Zealand and…