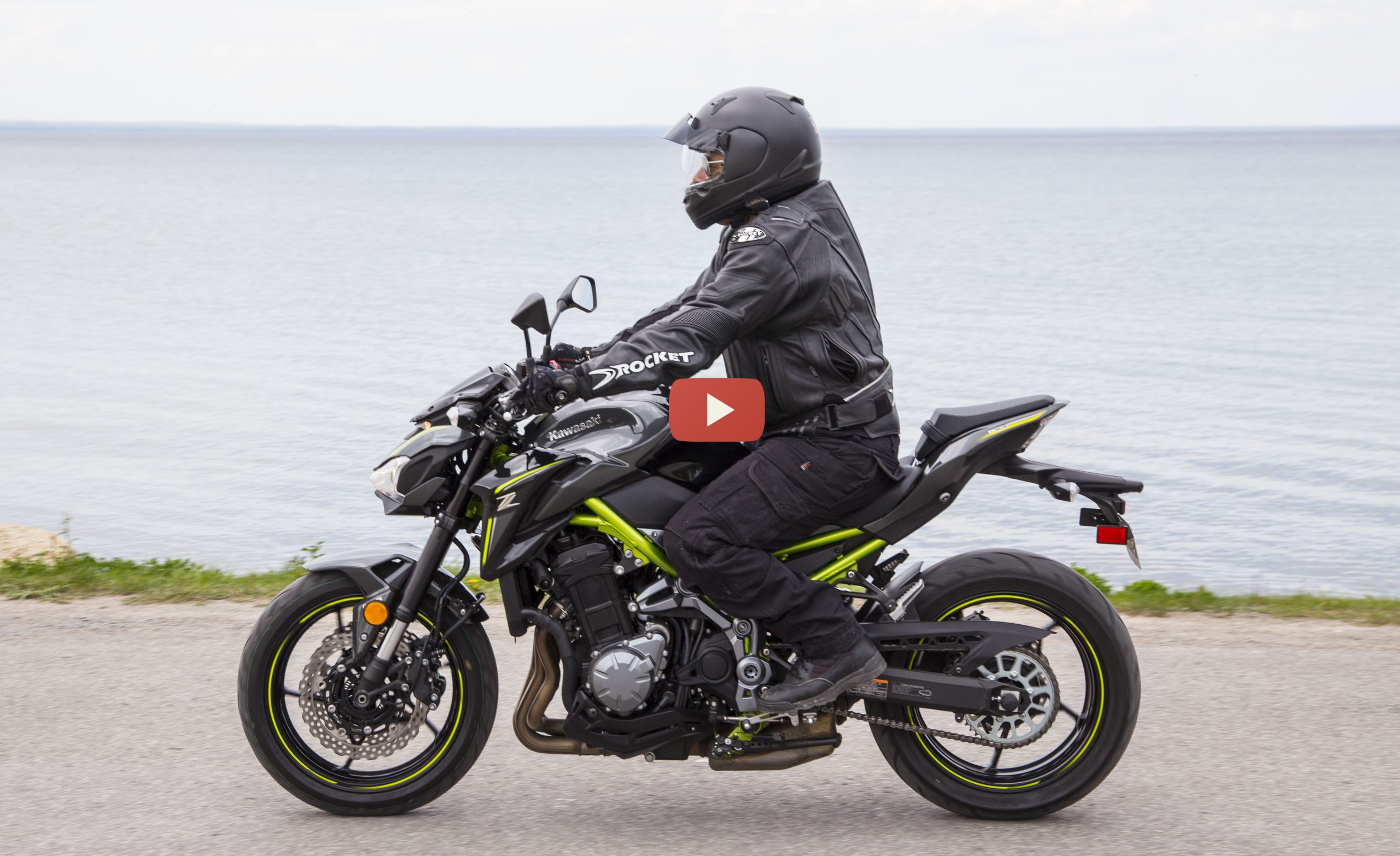 Working without a safety net

We’re encountering a renaissance of sorts in the sport standard segment at the moment: a return to responsibility rather than restriction; a dialling back of the nanny state in favour of more affordability and fewer dash-enabled menus. Several competitors in this class are currently offering sportbike performance at a bargain, and it’s the lack of advanced electronics that’s helping to make it possible.

If any manufacturer was likely to give riders the benefit of the doubt, it was Team Green. After all, look at what it’s given us in the past: The 1972 Z1 was originally planned as a 750 cc machine, but had its production delayed by a couple of years after the introduction of the Honda CB750 in 1969 so that the engine could be enlarged to 903 cc, and it could once again be marketed as the most powerful Japanese four-cylinder four-stroke ever. More recently, there was the 2004 ZX-10R, arguably the hairiest-chested, most delinquent superbike to date, followed by the drag strip-conquering ZX-14. Of course, if ever there were a bike to prove Kawasaki has the utmost faith in the consumer, it’s the H2 series – both modern and classic – which will happily turn you a whiter shade of pale with little coaxing. And now for 2017, the company has rolled out the Z900 ABS: a 948 cc streetfighter that’s shed almost 21 kg over the outgoing Z800. They’ve given us this wailing four-cylinder streetfighter and said, ‘There you go, do as you please.” 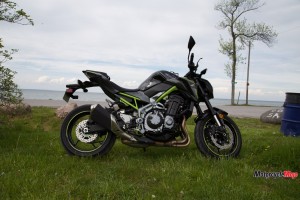 Here, your traction will not be controlled, nor your wheelies mitigated, and it does not come standard with a “magic box” capable of sensing every dynamic of a vehicle in motion. However, the Z900 will intuitively interface with the rider; it’s just a simple matter of plug and play, really. The bike even comes with a standard dock – I believe it’s still called a seat, last I checked.

From atop that firm saddle, the rider will find all the ingredients Kawasaki got so right with the Z800: stable handling, smooth power delivery and a comfortable riding position. Despite being offered here for only a single year, the Z800 made a favourable impression on many, myself included. During testing of the Z800, I was repeatedly struck by the attention to detail paid to things like textures and finishes. Ironically, on the day I returned that bike to Kawasaki, the senior staff had just gotten out of a meeting and I found myself surrounded by the top brass, along with a special guest from Japan, aka their boss, who immediately began questioning me about my thoughts on the bike, to which I responded by pointing out the various improvements I’d been taking note of. In hindsight, I could have left out the reference to Yamaha’s FZ-09 and its current (at the time) benchmark in the class, though I think he appreciated the comparison, that or the wry smile he returned could very well have been a hint at what was to come. 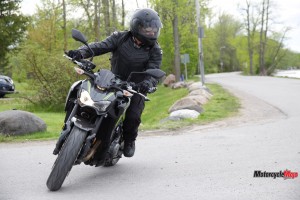 There are two primary contributors to the rebirth of this platform; the first is a liquid-cooled, four-cylinder powerplant that’s been enlarged from 806 cc to 948 cc, and now delivers 123 hp at 9,500 rpm and 73 ft-lb of torque at 7,700 rpm. The engine’s tuning favours a mid to top-end power delivery with a noticeable surge beginning at 5,500 rpm and building to above 9,000 rpm. Power is smooth and precise, with no hiccups in the fuelling, making it a perfectly well-behaved companion on the road and in traffic.

The second, and more significant, change for the Z900 is its all-new trellis frame, à la H2. At just 13.5 kg, the frame represents much of the 21 kg weight loss over the Z800, and transforms the new bike into a proper menace that has the agility to match its engine’s eagerness.

The emphasis on balance extends to the KYB suspension; both spring preload and rebound damping are adjustable front and rear, though compression has been fixed to favour a more plush ride on typical roads. I had zero complaints about the suspension setup and fiddled around with the adjusters enough to safely say they’ve got the vast majority of riders covered. Hard-core canyon carvers and track day junkies are going to notice the slightly softer ride quality, but that’s bound to happen with a 210 kg bike – yes, even after all that weight loss, it’s still no lightweight in this class. The little extra bit of heft translates into the stability and composure that’s long been a hallmark of Kawasaki bikes. 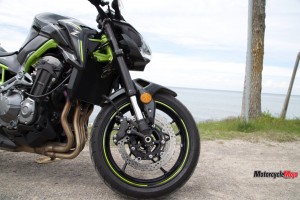 As has become habit, I wear video cameras to document most every ride these days, especially to capture initial reactions – you only get one first kiss, as they say. In the case of the Z900, I pushed play on the GoPro, started up the bike and rolled down the front walkway, feet on the pegs, clutch in and foot on the back brake. It practically wanted to stand up on its own, happily coming to almost a complete stop. By the time we’d rolled the 10 metres into the parking lot, there was a feeling of familiarity. A few figure-eights later and a quick check of the rear ABS’s very noticeable attempts to ruin my fun and prevent any unwanted skid marks in the Kawasaki parking lot, and I was feeling pretty good about our first time.

In the city, the Z900 is a doll, thanks to a very manageable 795 mm seat height, the soft low-end power delivery and a little beauty called the cam-assisted clutch; this thing is right up there with sliced bread, perforated toilet paper and tablets for toddlers – there’s just no reason to go back to the old ways after stuff like this – it would be cruel and unnecessary. We’re talking one finger clutch pulls, maybe even pinky finger. Actuation of a gear is evident at the lever, where you can feel the positive engagement and can easily modulate the lever, which has a friction point that’s a little farther from the bar than I’m partial to. The light action makes up for some of that, as does the adjustable span on the lever. The clutch also has a slipper action to counter premature downshifts resulting in rear-wheel hop or lock-up.

Voice of an Angel

With a little bit of open road ahead of you, the bike wants to spool up into the power and show off its lungs, or rather the wail that’s been intentionally engineered through the use of uneven intakes, benefiting both torque output and my auditory senses. It’s meant to sound aggressive yet playful – I’d say if by playful they mean a panther doing a little mauling, then they nailed it. Wind it to just shy of the redline and the sound is almost as impactful as the speed that’s piling on.

All the controls are light and give satisfying feedback. The gauges just sort of hover down there below your line of sight, as if to say, “We’re here if you need us.” But you barely do, despite all the usual useful info being displayed. Instead, the wind, the sounds and the constant prodding of the ever-enthusiastic powertrain tell you when you’re travelling at a legal pace and when you’re clearly not.

The brakes start soft and build in strength, but don’t offer as much feel and involvement as the rest of the bike. A set of braided lines and good pads would unlock some potential for aggressive riders. The wide bar and upright seating position is road-friendly, and the duration of your ride will come down to how long you can deal with the saddle. There’s an option for a 25 mm-taller saddle with more padding, and I suggest it, because you won’t want to stop if you don’t have to.

As far as styling goes, I liked the Z800, but the Z1000, not so much – it’s a little too Sugomi for my taste; but the Z900 is a nice middle ground between the two. Its trellis frame adds not only style, but also function in regard to weight-savings, rigidity and better handling qualities.

With this new bike also comes a restructuring of the Z family. The Z1000 is no longer available in the States, and here in Canada, we’re only getting the up-spec Z1000R, its premium electronics and components serving as a justification for the $14,149 price tag. At 10 kg lighter, and producing about 20 less horsepower, the Z900 ABS at $9,699 is looking like a pretty good deal at the moment. It’s right in the mix with the FZ-09, Street Triple, GSX-S750A and a couple of others for best bargain of 2017.

I’ve always been a fan of less is more, and have often stated my appreciation for bikes like this Z900. While it’s not 100 per cent tech-free, and does have ABS and a slipper clutch, it still embodies the kind of bike that I, and many others, prefer: something with personality that’s simple and intuitive. And those aren’t exactly traits associated with modern four-cylinder motorcycles, so good on Kawasaki for striking a balance that makes sense – to me at least. And, if the ABS is still too much intrusion, you can opt for the non-ABS version, which will save you $400 along with a couple kilograms, allowing you to cast off the last oppressive shackle of electronic restraint.