Why would a company produce a WSBK spec bike that can’t be ridden on the street or raced in a production series? Because it can.

It’s not that long ago that BMW was content with making conservatively designed boxer twins, which had a huge following among greying, suspender-clad gentlemen. Mid twin-digit horsepower outputs were the norm, and the bikes had modest handling, mediocre brakes and clunky gearboxes. Of course, those horizontally opposed twins have evolved, and have branched out to fill separate niches; you can get a full tourer, a sport bike, a naked bike or an adventure bike, and any of them produces more than twice the output of the old airhead boxers.

While those bikes all perform quite well, if you want real racetrack performance from a German-made motorcycle, you have to look toward the S1000RR. When it was introduced in 2010, it brought a whole new level of performance into the open supersport class, its inline-four raising power to a then unheard of 193 hp (about a dozen more horses than its competition). It also came with adjustable traction control and ABS, at a price point that matched its Japanese competitors, which at the time lacked these advanced electronics. 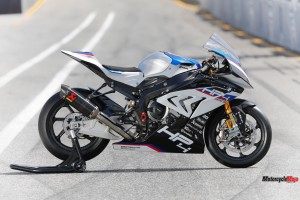 Well, if you think BMW was serious about performance with the S1000RR, wait until you see the 2018 HP4 Race. Despite resembling the S1000RR, the limited-production HP4 Race (750 units) is an entirely new machine that has more in common with the Althea S1000RR race bike competing in the FIM World Superbike Championship than it does with the street bike. In fact, about the only parts it does share with the S1000RR are the engine castings.

It also comes with a new price, and you’d better be sitting down for this one. For the price of one HP4 Race, you can get five S1000RRs, and you’d get a few grand back in change. The better-than-WSBK-spec HP4 Race lists for $95,000. If you find that outrageously expensive, well then this bike is really not for you. It’s a bike that can line up on a WSBK grid and, in capable hands, race competitively. The irony is that despite being hand built at BMW Motorrad Motorsport’s factory race shop in Berlin, using many of the same components found on the FIM superbike, the HP4 Race cannot be raced. Homologation for most racing series dictates that competing machines must be based on commercially available street bikes. And the HP4 Race is no street bike. BMW held a launch for this bike in Estoril, Portugal, where we got ample track time on this exclusive machine.

That BMW produced a superbike that can’t be raced or ridden on the street makes you wonder why it was built. According to BMW, it was built to introduce carbon fibre technology to motorcycling, a feat the company has already tackled on the automotive side with its i3 electric and i8 hybrid cars. It utilizes a lightweight carbon fibre frame and sub-frame, wheels and bodywork. These lightweight components combine to drop the weight to 171 kg full of gas, which is 37 kg less than the street bike, and 8 kg less than the FIM superbike.  It’s even seven kilos lighter than the as-elusive and almost as-expensive (approx. $85,000) Ducati 1299 Superleggera.

More than Technology to Consider

At 7.8 kg, the frame weighs 4 kg less than the street bike’s aluminum frame. Handling the bare frame feels more like handling a toy than a key component of the more than 200 hp superbike. It could have been made even lighter, according to Elmar Jaeger, the frame’s designer, but BMW had to account for longevity, setting and even corrosion resistance, things that are not really issues on race bikes used in competition, where parts have a brief lifespan and are replaced regularly.

To handle the “setting” issue, where material at mounting points compresses with time due to assembly, aluminum inserts are used at all of the frame’s mounting points. Since carbon fibre contains carbon, it reacts with the aluminum to cause corrosion, as when aluminum mates directly to steel. The inserts are moulded into the frame instead of being pressed in so that no oxygen gets between the two materials, thus preventing corrosion. Frame wall thickness is also optimized to benefit longevity. 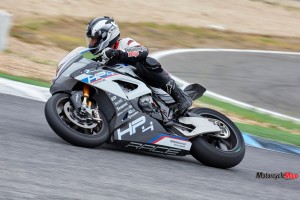 Powering the HP4 Race is a 999 cc inline-four that produces 215 hp (16 hp more than the S1000RR, 5 hp less than the WSBK race bike), but it’s no regular production engine. Also hand built at BMW’s race shop, the engine uses parts derived from the firm’s race engines (see sidebar). The engine contains a close-
ratio gearbox, with only third gear being the same ratio as on the street bike.

Comparing chassis geometry with the S1000RR is pointless, since the rake angle (23.5-25.5 degrees), trail (95-112 mm),
triple-clamp offset (26-32 mm) and swingarm pivot height (+/- 4 mm) are all adjustable, and all the necessary inserts are included with the bike. The heights of the ride, seat and foot peg are also adjustable; plus, you get three different countershaft sprockets and five rear sprockets to alter the final drive ratio for different tracks.

Öhlins provides the suspension components, and they’re the real WSBK deal. The fork is the FGR300 World Cup, which is designed so the brake calipers need not be removed to remove the wheel; the shock is the TTX36 GP – both items are fully adjustable and identical to the parts found on the Althea race bike. Brakes are race-spec GP4-PR Brembos up front, with a four-piston caliper at the rear (single piston on the street bike), and there’s no ABS.

Further separating the HP4 Race from the S1000RR are the electronics, which are much more elaborate. It has four ride modes (Wet, Intermediate, Dry 1, Dry 2), lean-sensing dynamic traction control with 15 levels of intervention; adjustable wheelie control that intervenes only in the bottom three gears; adjustable 15-level engine braking; launch control that works in first and second gears; and a pit lane speed limiter. Also part of the electronics package is a quick shifter that works up and down, and a 2D data logger with an instrument panel that can be configured to display a multitude of information, including traction control, engine-braking and ride-mode settings, GPS-enabled lap times, as well as more elaborate data like throttle opening, front and rear wheel speed, lean angle and, if the optional sensors are installed, brake pressure and suspension travel. Adjustments to the electronics can be made on the fly through the specialized, race-only switchgear, which is simplified compared with a street bike (just three large buttons on either side), and very easy to use. 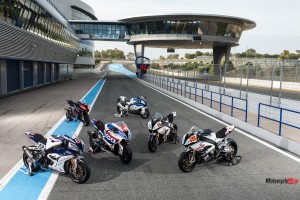 Even before sitting on the HP4 Race, the fit and finish of the carbon parts, the precisely machined engine covers and levers, and the abbreviated tailpiece hint at the performance within. With the engine fired, the exhaust isn’t unusually loud, and is much quieter than many of the superbikes racing in the Canadian national series.

We’re allotted four 20-minute sessions on the HP4, and there are also several 2017 S1000RRs on hand that we can ride any time we’re not on the hero bike. The only changes made to the stock bikes are the reversed gearshift pattern, to match the HP4’s GP shift pattern, and the Pirelli Diablo Superbike Slicks in the SC2 compound, also matching the HP4’s rubber. To get acquainted with the unfamiliar track, I ride the two first sessions on an S1000RR.

After the two sessions on the street bike, I hop onto the HP4 and immediately notice its much more extreme riding position. The seat and especially the foot pegs are higher, despite both being adjusted to their middle positions. Once rolling, the next thing I notice is just how much lighter, stiffer and more precise the HP4 feels. It takes less than half a lap to feel completely comfortable on it, steering with much more precision than the street bike, which itself is a stellar-handling motorcycle. It takes less physical effort to ride the HP4, especially through the tighter turning transitions, and at a faster seat-of-the-pants pace (lap times were not being recorded).

The electronics are much more evolved and are not comparable to anything available on a street bike, at least not yet. The wheelie control is almost completely invisible, allowing the bike to rocket forward with brutal speed without lifting a wheel, until you hit fourth gear, where it can lift at very high speeds if you’re not careful. The stock bike often lifted a wheel coming out of slower turns, making it feel faster (most likely not), but also requiring more effort to ride.

We were told that the first session on the HP4 would be ridden in Intermediate mode to let us get accustomed to the bike, though even in the first session I find the bike to be blisteringly fast, making me wonder what it would be like when we eventually switch to Dry 1 mode (we’re told to avoid Dry 2, since no wheelie control was available). It’s only after I come into the pits that I realize the bike had already been switched to Dry 1 mode by a previous rider, proving to me just how easy it is to get accustomed to and ride the HP4.

Throttle control at corner exit is as near to perfect as possible. Despite the bike’s substantial output, you can come off corners in the lower three gears with the throttle opened wide. This is because the ride modes provide different power curves in first, second and third gears, unlike a street bike, which has the same power curve in all gears. This makes the throttle remarkably easy to manage, especially noticeable when exiting the chicane in first and opening the throttle full while still cranked way over. The traction control, too, works flawlessly, with only a slight popping coming out the exhaust, indicating that it’s managing grip at full lean. I initially begin at level +6 (-7 to +7, least to most intervention) and work my way down to +3 in the final session, though I would have gone even lower given more time.

Of course, once on the front straight and in fourth gear, acceleration is brutal enough to flatten eyeballs. Exiting Estoril’s final corner at more than
160 km/h in fourth and rolling on the throttle full produces acceleration with such force that I strain to pull myself forward and tuck in behind the windscreen. Braking for the 90-ish-degree right-hand first turn at the end of the 300-plus km/h front straight is hard enough to make blood rush into my face, and the Brembos do this consistently with very little fade. The S1000RR, on the other hand, had displayed enough fade that the lever needed to be readjusted farther out, about mid-session.

The BMW HP4 Race is not a superbike repli-racer, but rather a true superbike-spec motorcycle. Of course it’s expensive, and there are other costs that come with ownership: BMW recommends replacing the engine at 5,000 km intervals, at a cost of about €15,000 (approx. C$21,800), which is claimed to be cheaper than rebuilding the existing engine. But that’s the price you have to pay for WSBK performance. I think well-to-do collectors, and possibly wealthy track day enthusiasts, will snap up the 10 or so that will come to Canada (the Ducati Superleggera is reportedly already sold out). If you can afford to add one to your collection, the HP4 Race is worth every penny. But you should ride it, and ride it hard, or you’ll have no idea what you’ve got.