You have to learn to trust your instincts

A few months ago, I had the great pleasure of interviewing Fast Freddie Spencer, three-time MotoGP World Champion and the only rider in history to win both the 250 cc and 500 cc Moto GP Grand Prix Championship in the same year.

While I certainly had a million questions I wanted to ask Mr. Spencer about his incredible racing career, the focus of this particular interview was about his latest achievement, completing his autobiography, Feel. 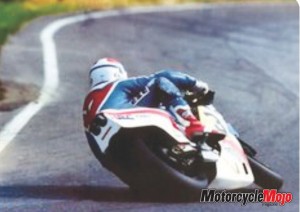 We spoke for an hour and it was a smooth, enjoyable conversation, more like talking with an old friend than interviewing a legend.

The process of writing Feel took more than six years, and in the book, he opens up and shares things that he had never told anyone before. His intentions were not only to tell his entire life story with a focus on his incredible racing career, but also to explain how riding motorcycles taught him to trust and use his senses. Many of the decisions he has made in his life have been based more on what he sensed and felt than on more perceived rational thought processes. Racing motorcycles taught him to trust his intuition, and he wanted to encourage others to do the same.

Here is an excerpt of our interview.

Misti Hurst: What can readers and fans expect from your book?

Fast Freddie Spencer: The story obviously is about my life, my career, and that in itself is an interesting journey, and I incorporate that into the book itself.

I love motorcycling and what it’s given me, but I felt this real inner need to understand more about why it meant so much to me and, even more importantly, in my way, to show the respect for something that has given me my life and understanding.

So, the book is written from the perspective of what I have learned through motorcycling, and the “feel” part comes from many elements of it. [For example] as a kid, what I felt holding onto the bars. I didn’t like to wear gloves because I could feel the grips better. It was about trusting what I felt. And motorcycling gave that to me; the ability to hone my skills for what I see, sense and feel.

MH: What was the hardest part of the book to write? 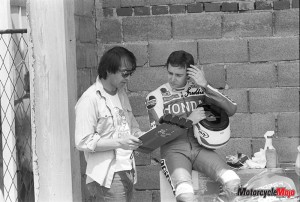 FFS: It’s interesting. There are many things I talk about in the book that I’ve never talked about in interviews or publicly and such. And the reason why is context, and because most situations in your professional life you’re recounting what the event was and talking about the technical aspect of it or even just the analytical part of it. Even in the years that I struggled, I never really talked about those things, which is what I address in the story.

MH: What was it like being a young child and getting on a motorcycle for the first time?

FFS: I would ride for hours in my yard when I was a kid and I loved it, Misti, a lot. I would ride constantly in my yard. It was the perfect situation for me to become a motorcycle world champion.

I had this acre of land, and I was riding through the trees and I had to be precise, and if I crashed, I didn’t just pack it up and quit, I’d keep riding. I had to ride no matter how slick it was, and so I figured out things, through awareness and paying attention. Like if the leaves were discoloured: if they were darker, then it was wet under there; if they were lighter-coloured it was drier, and that would determine the angle I would go and the lean angle and the movement of the bike, so that I could get through those trees safely and as fast as possible. 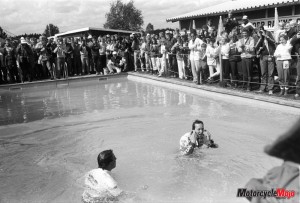 In that respect, it was a very practical thing, but it was dependent on a few things: my ability to be able to see it, sense it and feel it, and then also trusting those instinctual things. So, when I was lying in bed at night, at five or six years old, I would think about ways to improve my riding.

MH: How do you respond when people say that “It can’t be done”?

FFS: When I was a kid, these kids, the other racers, were bullies and they would tell me, “Kid, if you win the race, we are going to beat you up.” So I’d go win the race and then I’d run as fast as I could to hide in the truck so they couldn’t beat me up, because I was always the little guy, you know.

FFS: It wasn’t because they had the best bike or the best team or anything. It was because of seeing a photo [of Mr. Honda] when I was a kid, watching the 1979 British GP sitting in my mom and dad’s house. I’d already won races that year from the factory Kawasaki team and they were offering me all this money and things, but I just couldn’t do it. Everybody said, “Well, why can’t you do it?” and I said, “I just can’t.” And so I get a call in November and he says, “Freddie, this is Dennis McKay from American Honda and we’re starting this new superbike team and we already have three riders but we want to hire you.” And I said, “I’ll do it.”

And so four years later I’m in Mr. Honda’s house and he puts his hand on my shoulders and he says thank you, and for me, that is exactly why as a kid, sitting on my sofa, I felt I should ride for Honda. Sometimes the things that we need to do most, of course, have no practical reason – it’s just trust.
I hope that when an adult reads Feel or a parent reads this or a kid reads this book that they realize within each of us, those opportunities are there. How much it flourishes depends on effort, opportunity and environment.

MH: What would you say is the biggest misunderstanding about you?

FFS: Because I was quiet and came from this conservative environment, people always thought I was maybe kind of religious or extremely religious. I was absolutely spiritual, but even at a young age I wasn’t sure how to talk about what I understood.
I’ve always had this strive; I’m always striving to understand what it is that I know and the opportunities that I’ve been given.

MH: In the outline of the book, you allude to a moment where you felt like you had it all but wondered why. What exactly was that moment and what made you wonder about it?

FFS: In May 1985, I was in the middle of doing the two championships and was four races into the season. I’d won a 250 cc race and a 500 cc race, but I hadn’t won both races on the same day. It’s the Italian Grand Prix in Mugello, very hot day, and I go out and I win the 500 cc race first in a hard battle with two riders. One was Eddie Lawson – he was a great racer of my era – and the other was Christan Serron. Then the 250 cc race was right after.

I was exhausted and I didn’t get a good start in the 250 race. I came from 19th place and actually worked through the pack and ended up winning. I won both races in Italy, at one of my favourite places, Mugello, in front of a huge crowd. Afterwards, I was sitting in my motorhome with my leathers on . . . and it’s just me. I’ve got both my trophies and I’m just sitting there.

This is the greatest moment! This is 1985, 19 years into my career. I’m already the youngest world champion, and I’ve done something that most people said couldn’t be done. In fact, it had been 12 years since anybody had won the 250 and 500 race on the same day. Then this feeling comes over me as I’m looking at the trophies, the feeling that this isn’t all I’m supposed to know.

It’s those subtle glimpses that are the true ones, the moments that you really want to pay attention to.

MH: The process of writing, did it energize you or exhaust you?

FFS: Well, I have notebooks full of writing. I’ve been writing pretty much every day since the fall of 2010.

The real issue was that I had all this future aspect that I wrote in the spring of 2012, called Breeze. That process just came to me. It was just understanding. It’s kind of like my racing – the same way I just feel it, I trust it. Riding a motorcycle for me is anticipating, and in a way, I have a clarity. I flip a switch and it’s clarity when I get on a bike. And that is the subconscious, it’s the zone, it’s that connection to that part, an incredible awareness. And motorcycling is how I hone those skills to do that. So, when I began this part of writing, that is kind of what I did. And I just kind of woke up and started writing one morning.

For me, I’ve been training my whole life for this. And that’s what life is, that’s the important part about it, about understanding that aspect of it.