» Articles, Bike Reviews, Featured Bottom, November 2017 » One for the Road

One for the Road

Indian’s luxury tourer not only delivers comfort and performance, but draws quite a crowd, too

Story and Photos by Jamie Elvidge

“Is that your gorgeous cruiser out there?” She’s drawn out the word “gorgeous” like warm butter across fresh bread, then accentuates it with a darting eye roll. I’m five-deep in a torturously slow grocery line at the Albertson’s in Missoula, Montana. Glancing outside I can see the devilishly hot sun winking off the Indian Roadmaster’s nostalgic green-and-cream fairing. The bike is drawing yet another small crowd. I’m not sure an ice cream truck would please as many people.

“Yup,” I say sheepishly, wondering if my Gatorade, apple and Snickers bar are worth waiting in the long grocery line. “Well, it’s not exactly mine.” I admit. “I’m just testing it out. It belongs to Indian.” I know this answer is going to solicit further questioning, but the cashier has called for another price check, and talking about the Roadmaster and the resurrection of Indian Motorcycles is way more fun than staring at a rack of tabloids touting alien invasions and potentially pregnant celebs. 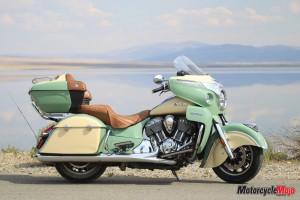 It might be my cheerily painted Roadmaster with its valanced fenders and swooping lines that catches the eye, but it’s the story of Indian Motorcycles itself that captures the imagination. I explain how the iconic brand was actually America’s very first motorcycle company back in 1901. After a storied 40 years, the brand was sold and virtually disappeared for decades. There were a few attempts at resurrection, including a heartfelt try by Stellican, the folks responsible for breathing life back into the iconic Chris-Craft line of boats. Only trouble was, their Indian redo didn’t float.

In 2011, nearly 60 years after the last authentic Indian rolled off the line in Springfield, Massachusetts, manufacturing giant Polaris Industries, known for its engineering prowess, heartland values and enthusiast workforce, was able to buy and breathe real life into the brand. By the 2014 model year, there were three all-new renditions of the much-romanticized Chief on the road: the Classic, the Vintage and the first Chieftain with its fork-mounted fairing and hard bags. In 2015, the luxury-touring Roadmaster was added to the list of players, offering riders a spacious hard-shell trunk, fairing lowers, an electronically adjustable windshield, extensive stereo/infotainment system, and heated grips and seats for both rider and passenger.

The Heart of the Matter 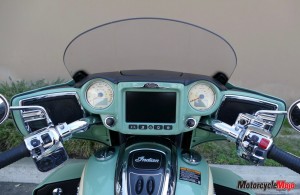 All of the Chiefs, the Chieftain, the Roadmaster and their many variations share the same mechanical platform, centred around a bodacious 49-degree, air-cooled V-twin, the Thunder Stroke 111, a beautiful, modern interpretation of a classic Indian powerplant, offering an impressive claimed peak torque of 119 ft-lb at 3,000 rpm. All that stump-pulling power is tidily managed by a closed-loop, throttle-by-wire EFI system. A trusty belt delivers power smoothly to the rear wheel.

Around town, the Roadmaster’s power output is beyond ample, and plenty for legal highway and interstate speeds, too. By the time I was locked in the conversation in the Albertson’s grocery line, I’d already put 4,500 km on the Roadmaster, travelling through Southern California, Nevada, Idaho and Montana almost entirely on two-lane highways. So yes, there had been lots and lots of passing tourists in their RVs and rental cars. The Roadmaster makes short work of it, though it typically asks to be kicked down a gear.

Not only did Polaris engineers invest a ton of time and energy in creating a showpiece engine that is as pleasing to look at as it is to throttle around, they went to great pains to develop an exhaust pulse that would sound – and feel – amazing. The transmission and gear pairs were designed from the get-go to give off very low mechanical noise so one hears as pure an engine pulse as possible. On or off the bike, people love the way the Thunder Stroke sounds at idle, both in cadence and in tone.

It’s also intentional that the rider feels that pulse via a mostly pleasant drumbeat rising through the seat, floorboards and handlebar. For me, the sweet spot is 2,000 rpm in the higher gears, where a light, rolling throb reminds me it’s a great day. However, around 2,600 rpm (113 km/h in sixth gear), there is a less-pleasant surge of high-frequency vibration that tickles the feet and tires the hands, but it’s specific, and mostly avoidable with a shift in gear or change of speed. 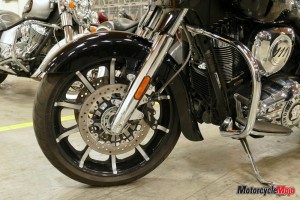 There is also the matter of heat flooding off such a huge air-cooled mill, and engineers worked hard to manage that as well. Ceramic-coated headers, heat shields and the engine’s massive fin area work together to direct heat from the rider’s legs, but there’s just no way to forget your knees are hugging a 905 cc can of fire, at least not in hot weather.

And I had been riding through about as hot of weather as you can imagine. In Nevada, temperatures held between 44 and 46 C for an entire afternoon that found me buying armloads of Popsicles at each gas stop – not to eat, but to situate in my riding clothes. The Roadmaster provides vents in each fairing lower to allow for airflow, and the lowers can be easily removed (three bolts apiece) if you were planning ahead for a hot ride.

Accessory highway pegs would have been a godsend for this hot-weather tour, but only to increase airflow. The Roadmaster’s ergonomics and seat are incredibly comfortable, even for the 12-hour days I was putting in. The floorboards are spacious and keep the hips and knees at neutral angles, while the wide handlebar is restful for the shoulders. And those flashy leather seats? Every bit as comfortable as they are beautiful. At the time of this writing, I am now 12 days and 6,000 km into a lap of the U.S., and the only parts… 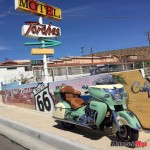