America’s “Loneliest Road” is also one of its loveliest

Story and Photos by  Jamie Elvidge

U.S. Route 50 runs all the way from Ocean City, Maryland, to Sacramento, California, but it’s the section that bisects Nevada that is by far the most interesting. Dubbed “the Loneliest Road in America” by Life magazine in 1986, the designation stuck. Highway 50 in Nevada is also one of the more notorious portions of the original Lincoln Highway, America’s very first transcontinental route.

This high desert here in Nevada has to be one of the most beautiful and empty places on earth. It’s the centrepiece of North America’s Great Basin, a distinct area roughly 800 km in diameter that stretches from southern Idaho to Mexico and from California to Utah. This region is one of only four cold deserts in the world, surging toward the heavens at elevations ranging from 1,200 to 2,100 metres. Shut in on all sides by towering mountains, the basin has its own unique ecosystem, including a system of lakes and rivers that have no intention of reaching the sea.

I began my most recent crossing of the Loneliest Road with a visit to Great Basin National Park in the Snake Range, which slithers north to south along Nevada’s border with Utah. You might guess I was there to see the petroglyphs or the ancient bristlecone pines, but my real motive was simply to rise out of the sweltering July heat.

Out of the Fire and into the Pan 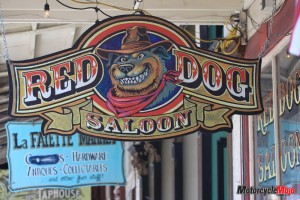 It had been an exhaustingly hot ride through Utah, with temps often topping 40 C. Wheeler Mountain, the centre-piece of the park, with its 3,658-metre peak, seemed a dreamlike refuge. I’d been daydreaming of its glacial breezes for a week.

A slight detour off the U.S. 50, you enter the park via local 487, then 488, which climbs steadily into the Snake Range. Within the park, Wheeler Peak Scenic Drive is undoubtedly Nevada’s most picturesque road with dizzying twists and turns and vertigo-inducing views. And man, did those cooler temperatures feel good.

Wheeler itself is an “island mountain,” meaning it has its very own tiny ecosystem that supports birds, mammals, fish and fauna that are literally trapped because of the uninhabitable desert that stretches away in all directions like a vast, dry sea. I dawdled at the road’s end, near the top of Wheeler’s summit, as long as possible before descending again into the frying-pan heat, riding right by the entrance to the marble and limestone Lehman Caves, which formed some 550 million years ago when this area was still submerged in a warm, shallow sea. A tour of the caves would have been another cooling respite, but alas, I hadn’t known I’d need a reservation.

Settling into the Indian Roadmaster’s plush seat, I headed west, counting windmills as I crossed the high-desert floor until I reached Ely, my favourite city in the state of Nevada. In Ely you can get great Mexican food at La Fiesta on Avenue H or Margarita’s in the Prospector Hotel, you can hang out with other riders who gather along Main Street near the Jailhouse Casino or you can take an interesting tour through the Northern Railway Museum.

From Loneliness to Excitement 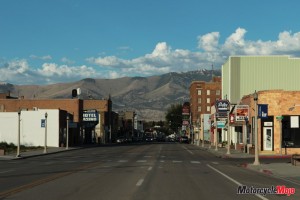 Whatever your pleasure, it’s a good idea to enjoy some downtime in Ely, or, on the flip side, in Fallon, because the 500 or so kilometres in between are indeed lonely ones.

U.S. 50 runs straight as a pin through the Great Basin’s immense, sweeping valleys, and then, right when you get a little sleepy, it throws you a tangle of steep turns as it rushes up to crest craggy mountains and ridges – 17 named mountain ranges in all – before spiralling down into the next empty valley. The undulation is satisfying, and the scenery deeply alluring. This is Mother Earth in the buff. Her topography laid bare. So vastly different from parts of the world where the earth’s attributes, as well as her blemishes, are cloaked in trees and grass and brush.

As I rumbled through the golden and green landscape the next morning, I was surrounded by long, wispy veils of cooling blue-grey rain. The wet sage smelled like tea and made me feel like a nap. Near Eureka I watched a herd of wild mustangs grazing in the distance, horses abandoned in this harsh desert during the mining days, yet surviving to become a central element of the storied American West.

There is almost too much time to think as you connect the oasis-like towns of Eureka and Austin and Middlegate. I try not to get stuck in state-of-the-world thoughts. Out here, in these empty spaces, I love to imagine what it was like to travel in the early 1900s, say on a Knucklehead or an original Indian Chief. Looking out across the landscape, where it’s exactly the same as it was 100 years ago, it’s easy to pretend. Well, easy to pretend when I ignore my Indian’s cushy suspension, push-button windshield and the GPS that points me to the next pay-at-the-pump station just as I run low on fuel.

A few kilometres before Fallon, the bookend mining-town-gone-bust to Ely, I stopped to investigate Grimes Point Archaeological Area and the Petroglyph Trail. It’s a sight I’ve seen many times over the years, yet I never tire of viewing the drawings created by Native Americans as many as 8,000 years ago. If you travel this way, make sure to stop. The primary viewing trail is less than a kilometre and a great way to stretch your legs.

If that piques your interest, ride about a kilometre and a half north on the service road for access to more hiking trails that lead to a series of caves thought to have been inhabited by the area’s original artists, back when the landscape here was lush with vegetation and home to a vast lake.

The other must-see, or better yet, overnight stop, on the west side of U.S. 50 is Virginia City, the most ridiculously charming Wild West town you will ever find. It’s only a 15-minute detour north on State Route 79 (Six Mile Road) when you’re travelling east to west. This is a big-time biker hangout seven days a week in the summer, and the town treats riders like royalty. Lining the main street are fun, historic restaurants and bars, with motorcyclists usually congregating at Red Dog and Bucket of Blood Saloons.

An aspiring journalist named Samuel Clemens used the pen name of Mark Twain for the first time while working for the Virginia City Enterprise back in 1862. As a result, the town claims to have birthed the world-famous writer, and a namesake museum displays his desk and chair, as well as a supposedly original wooden toilet seat that boasts a sign that states “Mark Twain Sat Here.” You’ve got to wonder what the author would think of that. 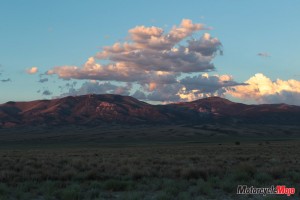 Once you’ve had your fill of saltwater taffy and shootouts, head back to 50 on State Route 342; but here’s the trick: Take the truck route bypass (S.R. 341, which leaves 342 and meets up with it later on), not the main highway. Warning signs make it sound as if the main route is exciting, with steep grades and twists too tight for trucks, but the truth is, it’s not a great moto road and it’s almost always torturously clogged with tourist traffic. The truck route bypass, on the other hand, is over 6 km of absolutely pristine sweepers that wriggle down the mountain like a swift, black river. There are rarely trucks on this truck route, but there are usually a few riders who’ve figured it out.

Gliding down S.R. 342, I saw a sportbike rider far ahead turn around at the bottom of the mountain and start riding back up. I thought that a great idea and grabbed another helping for myself. We passed each other five more times as we both kept riding up and then back down, gorging on the fresh asphalt with the vigour of other bikers throwing back their end-of-the day beers back at the Bucket of Blood. I wondered if he was smiling in his helmet the same way I was.

The active riding offered only brief rejuvenation. By the time I dropped back onto hot U.S. 50, I was feeling tattered by the long day. The Carson Range – and beyond it, the towering Sierra – loomed ahead as I slogged my way across Nevada’s mostly brick-and-mortar capital, Carson City. This jagged 650 km-long mountain chain not only cradles deep, dark blue Lake Tahoe, the largest alpine lake in North America, it boasts four national parks and the highest peak in the Lower 48, Mount Whitney, at 4,421 metres.

Into the Cool Mountains

As I crested Spooner Summit at 2,178 metres, the air cooled dramatically. The landscape was now green and conifer-laden, as if the 640 km of Nevada’s dry, empty desert hadn’t happened. The air felt thin and fresh, with warm vanilla scents wafting from the famously fragrant Jeffrey pines.

From here, U.S. 50 unwinds slowly toward beautiful Lake Tahoe until the Nevada portion terminates in the popular lakeside gambling mecca of South Shore. Your options here are endless. Play for 7s, grab a fancy meal on the cheap, stay for a show . . . Or, if you’re me, put the kickstand down at the Day Use Area just before Zephyr Cove Resort and trade your sweaty kit for a bathing suit.

The beach and always-icy, crystal-clear water were teeming with smiling tourists who’d had the same epiphany, but that was okay. I’d had more than enough of feeling friendless on the Loneliest Road in America, so I dove right in…