Culture shock, extreme heat, landslides and rush hours that include elephants can be utter chaos, but this rider wouldn’t have it any other way

It’s not as though it were an aggressive crowd –just a force and a single mind with a single mission: to get through and collect water from this spot on the river Ganges and carry it back to temples for hundreds of kilometres around. It was like a wave that you could not reason with. All you could do was brace yourself and try not to fall over. With only a litre of water, a heavily laden bike and full biking gear, I had found myself in the centre of the biggest Hindu pilgrimage in India on one of the hottest days of the year. I had unwittingly found the Gateway to God, and God was clearly in high demand that day!

“I’ll laugh about this later,” I told myself as I spent the next eight hours trying to force my way through the crowd and over to the sanctuary of the nearest hotel. Here I took refuge for another 16 hours while the crowds dispersed, leaving behind a trail of destruction and a great blog post!

Gandhi once said, “At the age of 18 I went to England. Everything was strange, the people, their ways and even their dwellings. I was a complete novice in the matter of English etiquette and continually had to be on my guard. Even the dishes that I could eat were tasteless and insipid. England, I could not bear . . .” Unlike Gandhi, I enjoyed the culture shock immensely. 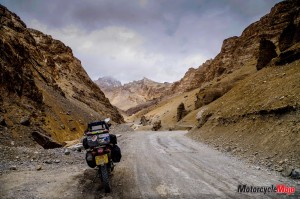 Riding in India can feel as if you are riding on the edge of a knife at times. The near misses, the heat, and the constant obstacles like cows, pigs, bikes and trucks, not to mention the speed bumps that have no warnings! Sometimes it feels like a great adventure, and other times, it feels like survival. At times, I struggled to keep my concentration and energy levels up in the midsummer heat and had to stop every half-hour for water and rest before pushing on again. You know it’s getting to you when your mind is telling you to let go of the bars and just let yourself fall.

I was told you need three good things to survive on Indian roads: good brakes, a good horn and good luck. It’s all true!

Poverty is clearly an issue here, and as you ride around, you cannot ignore the families living on the streets or the beautiful historic buildings in desperate need of repair. However, after a while, the beauty within the chaos starts to shine through.

Riding my Honda CRF250L (affectionately named Rhonda) through the heat, fully clothed in my black armoured jacket and pants, I considered going for the minimalist Sikh approach. They looked so cool riding around in their flowing white Kachhas and sandals. Having ridden with a group of five such Sikhs for a couple of days, I was sorely tempted to join them, but when it was suggested that I remove some of my gear at the sight of my increasingly sweaty helmet hair, I replied, “You put your faith in God. I put my faith in a pair of Sidi boots” – however uncomfortable that might be. We did look an odd sight as we rode together. Five male Sikhs on Enfield’s with white turbans and large kirpans (ceremonial swords) strapped to their ribs, and a heavily armoured woman on a Honda with a red helmet and a face to match. I certainly stood out in the crowd, and people looked on in puzzlement as I looked back in awe. 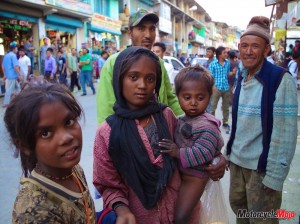 The sights, the smells, the elephant rush hours. India punches through your visor and ensnares all the senses with no apology. The country is so diverse, and continued to surprise me through my eight-week journey from Mumbai to Ladakh. As with anywhere, the connections with the people are what make the journey, and the Indians are very welcoming. The ever-growing biker community does not hide behind cool nonchalance. Instead, they choose to enthusiastically show their admiration and support for any long-distance rider crossing their country. I had one such biker waiting on the side of the road for me as I came out of Jaipur. He flagged me down and presented me with a gift from his mother after he had shared one of my blog posts with her. I was escorted into, and then out of, Delhi by fellow riders, and I had flowers brought to my hotel in Gurgaon. The homes of both the wealthy and the poor were opened up to me to use as my own for rest and companionship as I worked my way through this authentic country. 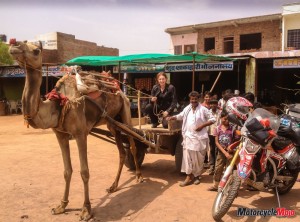 The faces changed as I headed farther north through Kashmir and higher into the mountains – a mix of Indian and Tibetan. The traffic stopped, the tarmac ran out, and soon I found myself surrounded by snow-capped peaks and glaciers, riding higher and higher on narrower and bumpier tracks into the cool air of the Himalayas. Eventually I passed a sign saying, “Welcome to the Region of Ladakh.”

I had made it all the way from Mumbai, nearly 3,200 km across India, in temperatures reaching up to 45 C, among chaotic traffic, to the start of the famous Ladakh – aka Bikers Paradise!

After just a couple of days’ rest in Leh and an accomplished mission over the Khardung La mountain pass, I was ready to tackle some more adventure, and decided to take the high road to Manali. This highway is only open for about four months of the year, and the average elevation is more than 3,900 metres, with the highest point reaching 5,328 metres at Tanglang La mountain pass. I made the Rohtang Pass with no real problems. It was a great ride with plenty of dirt tracks and breathtaking views, particularly through the Moore plains, which is surrounded by stunning natural rock formations. I set up camp for the night at 4,572 metres. It was cold!

Around four the next morning, I woke to the ominous sound of heavy rainfall. I knew I had two more high passes to make, and with rain comes fog, snow, mud and the threat of landslides. I did not relish my ride. The rain kept coming until around 7 a.m., and that’s when I decided to go for it. As I headed for the first pass of the day, I cranked up my heated grips and prepared to hit the snow. First, though, came the mud. The tracks were slippery and rutted. Amazingly, trucks use this as a highway, and the hardest part is getting past them. There is no room for error, as the drops are deadly. Generally, you beep your horn to let them know you are coming and they give you a little space to squeeze through.

However, on this occasion I got it wrong, and as I took the gap that had opened up between him and the drop, I realized he was not moving for me at all, but swinging out to take a bend. His front end was closing in, but I had passed the point of no return. My only chance was to make the gap before he closed it entirely, so I squeezed the throttle and screamed in my helmet, convinced I was not going to make it. Just when I thought India had used up all my adrenaline, there it was. I made the gap – and it was not even 9 a.m. On the Rocks The view of the glacier lake as I started my descent was breathtaking, but all too soon my attention was pulled away and was now focusing on the next problem. I had made it past the truck and had come down out of the fog, but now the mountain track ahead was covered in rocks, the result of a fresh landslide. There were trucks on the other side and all the drivers were standing by.

They looked as if they were waiting for something. I assessed the rocks and thought, I can ride over those! Get on your pegs and work it! There was a biker behind me and we both went for it. That’s when the truckers started jumping up and down and screaming something. I lost concentration and went down, as did the guy behind. He came over to help me lift my bike and I asked him what they were saying. “The rocks are coming,” he said. I looked up just in time to see a shower of stones bearing down on me. I was glad I had kept my helmet on, but wondered what was following and nearly ran, but the guy with me just kept on trying to lift Rhonda, so I stayed and kept my eyes upward as we lifted. The truckers kept shouting and the rocks kept on falling – but we made it, continuing onward through rivers and valleys (like an enduro race with luggage) all the way to the little hippy town of Manali – and that is another story! From the chaos of the cities to the drama of the Himalayas.

Riding through India gave me some of my best and worst times during my Round the World trip. I look back on all of them now with fond memories and a desire to return. It’s a colourful country, full to the brim with interesting characters and dramatic landscapes. You never know what’s around the corner when you ride in India, and that’s what makes you feel alive. That’s what makes the adventure. Love It If you’re considering riding in India, don’t be put off by the naysayers. You’ll either love it or hate it, but you can’t know for certain until you’ve tried it. Choosing the right bike, the right clothing and the right time of year is key to an enjoyable experience. A small bike certainly helped get through the traffic, but ideally choose something that will still have enough grunt to allow for quick overtaking. Avoid midsummer, if you can. December and January will take away that one big problem of heat. Make sure you have riding gear with very big vents, and take layers for the altitude of the Himalayas. Finally, at all costs – AVOID HINDU PILGRAMAGES!