A father and son leave racing behind to explore the pocketbook-sized country.

The first Tourist Trophy race was held 110 years ago on the Isle of Man – a small, oval-shaped island lying between Great Britain and Ireland, measuring 52 km long and 22 km across. Laced with austere moorlands, wooded glens, sandy beaches, lonely castles and time-warp towns, the island is home to the oldest and most famous race circuit in the world, the Snaefell Mountain Course, to give it its proper name. 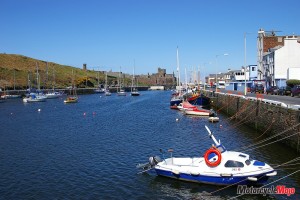 Although it’s possible to see what Manx people insist is a total of six kingdoms – Wales, England, Scotland, Ireland, Mann, and Heaven! – from the slopes of Snaefell, at 621 metres above the Irish Sea, the island’s highest point, the Isle of Man (“Ellan Vannin” in the local Manx language) is not part of the United Kingdom, but a Crown dependency whose original Viking settlement was ceded to Scotland by the King of Norway in 1266. Today, the Queen of England is also the Lord of Mann, represented on the island by a lieutenant-governor, complete with all the trimmings of a quasi-colonial setup. As a diehard motorcyclist, Her Majesty’seldest grandson, Prince William, was an anonymous visitor to the TT races in 2003, the year that Triumph crowned its return to the island with Kiwi Bruce Anstey’s victory in the Supersport TT on a 600 Daytona that “Wills” himself later rode at a private test at Goodwood. Queen Elizabeth’s face graces Manx banknotes, but they aren’t legal tender anywhere beyond the island. The island is also not part of the European Union. It is, however, a flourishing offshore financial centre that has seen many “come-over” residents – including MotoGP racer Cal Crutchlow, former World Superbike Champion James Toseland and his World Supersport counterpart, Aussie Andrew Pitt – taking advantage of the low 18 per cent income-tax ceiling. But the island’s population of 85,000 people (28,000 of them in Douglas, its capital and ferry gateway) doubles for the two weeks of the TT races. 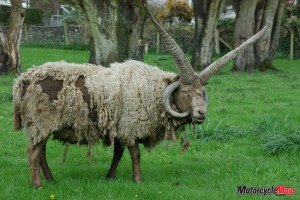 All the more reason, then, to get away from the crowded 60.73 km mountain course and explore the other parts of this pocketbook-sized country, which packs a huge amount of variety and history into its 572 sq. km. As a former TT rider with an honourable, but unexceptional, yet fortunate IoM race record – I finished fourth once, fifth once, eighth and ninth, but twice crashed at places where others have died – I’ve always enjoyed my two dozen trips across the Irish Sea to Mona’s Isle, a third, more romantic title for the island. That’s even though, as one of the hosts of self-funded privateers making up the bulk of the TT entry, I too often spent most of practice week locked up in a borrowed garage preparing my racebikes, when not actually out riding round the course either in an official timed session or on a road bike to brush up on my course knowledge. But, depending on how many different rides you had, race week was paradoxically more relaxed, and especially on Mad Sunday when, like most other racers, I made it a point of principle never to set a wheel on the TT Course, allowing me the opportunity to explore other parts of the island, aided nowadays by the informative IoM government website isleofman.com.