Once you understand the game of crossing Central America’s borders, it can, oddly enough, become an enjoyable experience

What does a round-the-world motorcycle trip look like? It can look very different to any motorcyclist you ask. It can be an epic four-month trip around the equator, or be multiple years riding through every continent. It could be solo, with a buddy or with your significant other. And it’s actually becoming quite common for people to make this leap into the alternative motorcycle travel hobo lifestyle.

For me, it’s the ultimate life decision. To make your motor-cycle your home – live off it, travel with it and grow as a person while you do it – sounds unreal. Surely, it’s not for everyone, but if the planets align and you can unplug from “normal” society, why not? The grand idea of riding your motorcycle every day is about as romantic as it gets, but in reality, this type of travel is a ton of work, with a lot of internet research, never-ending planning and logistics, and riding in every form of weather imaginable. From experience, I can tell you it’s more work than your average day job, but it’s worth it!

During the course of this current trip from Chicken, Alaska, to Cartagena, Colombia, I’ve covered about 30,000 km on my 2010 BMW R1200GS. As a result, I can tell you that a circumnavigation motorcycle trip is the epitome of getting out of your comfort zone for an extended length of time. And a good place to test that comfort zone, and begin to push your boundaries, is Central America. 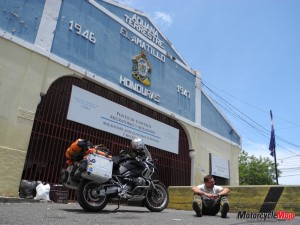 Many long-distance motorcycle travellers, or “overlanders,” actually ship their bikes down or simply buy a bike in South America as a strategy to bypass the dangers, humidity, crime and sometimes lengthy border crossings of Central America. But, those who do decide to ride Central America get to reap the benefits.

I left Vancouver in February 2017 on my way south to Argentina. After spending two and a half months in Mexico, I decided I needed to make my way into Central America. Now, if you’re an avid traveller, you have surely come across all of the less-than-positive rumours that this area has to offer: dangerous roads, dangerous people, crazy-long and confusing border crossings, drunk drivers, banditos, and basically anything else that may steer you to an all-inclusive resort to get your fix away from Canada. These rumours are sometimes just that, rumours, but sometimes the stories come from truth. If I ride through Guatemala, El Salvador, Honduras, Nicaragua, Costa Rica and into Panama, that’s six borders to cross, which is actually 14 if you count exiting Mexico and then entering and exiting each country until you arrive in Colombia. Being a British Columbian who has travelled a lot in the States and a little bit in Europe, these types of border crossings are daunting.

One thing that you may not have thought about while wanting to ride your motorcycle through multiple countries is, how do you actually handle the paperwork in compliance with each country’s legal expectations? The game really starts once you get south of the U.S. border, so getting familiar with your paperwork and border processes means you’ll have less stress and more energy to enjoy the new roads ahead. 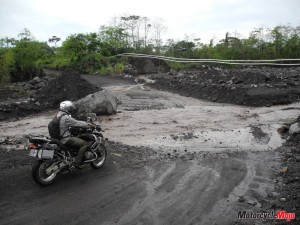 Every border crossing is a bit different and has its own processes. You’ll often have English-speaking locals bombard you with requests to hire them to help you out with the process. And when I say “locals bombard you,” I actually mean middle-aged men who get up in your comfort bubble and won’t take no for an answer. If you choose to not want help, you need thick skin to say, “No gracias, no lo necesito.” If you hire a local, or “fixer,” for US$10 to US$20 to help you with borders, you’ll have less stress and you’ll spend less time wandering around in the heat wearing moto-gear – and you surely have a bigger daily budget than me. I chose to use a fixer when crossing from Mexico into Guatemala, just to get an idea of what Central American border processes looked like. It cost me US$20 and was worth the experience. After that, though, I chose to go it alone – unless I count the 14-year-old boy who hung out with me for the whole process while crossing into Panama. I bought him a Powerade and gave him 1,200 Costa Rican colons (C$2.80) for his troubles.

After enough borders, I went from being scared about crossing to almost enjoying it. Besides, you can spend a few hours off the bike going through the routine and solving a fun paperwork puzzle.
It goes something like this: Ride to the border, park your bike in the exiting country’s parking lot and then go to Customs. Cancel the TVIP to exit the country you’re leaving, get paperwork and hand in paperwork, if need be. Find a money changer who has a stack of cash in his hand and swap cash on the street to the currency of the country you’ll be entering – you’ll need this to buy more paperwork. Get back on your bike and ride to the parking lot of the country you’re entering, park bike, go to Customs and Immigration to get your TVIP and passport stamp. Buy insurance, if mandatory. You’ll most likely need four or five photocopies of every new piece of paperwork acquired. Depending on the country, you may need to get your bike fumigated at this point.

Bring Your A Game 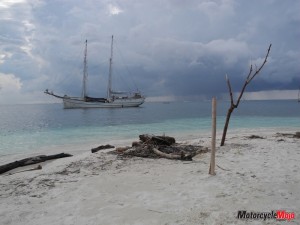 Be flexible! Get to the border before 11 a.m. to make sure you don’t land on an official’s two-hour lunch break, and allot a whole day to cross the border. If you’re lucky, two hours later you’ll have exited one country and entered into another with new roads to ride and cold beer to drink. If you’re unlucky, you’re waiting in line, sweating from 100 per cent humidity in your moto-gear, hungry, thirsty and needing to find a baño. If you’re really on your border A game, you park, then change into your shorts and flip-flops and lock your riding kit to your bike, and hopefully you also remembered to bring along screenshots from WikiOverland.org so you know costs of paperwork before you get there.

However you choose to do it, borders in Central America can be fun and are a great way to learn the culture, and can be passed through with little hassle. Take your time, people watch, buy some food and, most importantly, go in the morning so you have the whole day to cross, if necessary. In deciding how best to tackle Central America, some people bypass Belize, and most people ride through Honduras quickly. I wanted to ride in Belize, but met a girl in southern Mexico and chose to spend the time with her rather than do Belize alone, so I rode directly from Mexico to Guatemala.

As for Honduras, it has the worst reputation in Central America, and that’s a complete shame. (Pretty much everyone I met on the road with motorcycles takes the most southeasterly road from El Salvador to Nicaragua in a day.) You can cross Honduras in as little as 130 km, but if you do, you’ll miss the warmest people, I believe, in Central America. To paint a picture, Honduras is a mountainous country with dirt roads that go on forever. Imagine a country with one of the highest homicide rates per capita in the world, and much less tourism compared with Nicaragua or Costa Rica to the south. It makes for one hell of a country to ride a motorcycle through, with no tourists to mess your adventure vibe. My left arm got sore from returning waves to so many locals. Not to mention it’s inexpensive for accommodations and local food. Mind the Gap Once you make it to Panama, you need to figure out how you’re going to get yourself and your bike across the Darien Gap to South America.

The three main options are: 1) Flying your bike with Air Cargo Pack – costs about US$1,100 to fly from Panama City to Bogota, Colombia. You’ll need to source out a flight for yourself as well, which can be had for about another US$300. 2) Ship your bike in a container – easily found through forums or internet networking, and can accommodate multiple motorcycles in one container. Cost varies depending on how many bikes are crammed in the container. This can be the least expensive option if you share with many other riders. Once again, you’ll need to find your own flight. 3) Take a sailboat like the Stahlratte or Wild Card. Logistically speaking, sailboats are easier than the other options, since they can take you and your bike across. I decided to take the Stahlratte, which – at the time – was the best solution for me, since many other riders I’d met and rode with were taking it as well. It was US$1,150 for both the bike and me. Taking a sailboat built in 1903 with your motorcycle and island jumping for four days in the Caribbean sounded like a serious adventure. We set sail north of Panama City on the Caribbean from a small port called Carti and landed four days later in Cartagena, Colombia.

The Stahlratte is captained by a German fellow named Ludwig, who is one amazing host, and he has a crew of three to help out. It’s worth noting that Ludwig deals with the export and import of your paperwork from Panama to Colombia. I think the boat can hold up to 20 motorcycles and riders. We had nine motorcycles, nine riders and two backpackers on board. A portion of the crossing is spent cruising the calm San Blas Islands, lined with white sandy beaches, palm trees and locals feeding you lobster. After that, though, the 24 hours of open-sea sailing to get to Cartagena may wake up your stomach – if you’re anything like me – so bring your sea sickness pills. Bring a hammock, too, so you can sleep on the deck and stargaze, or marvel at the bioluminescence in the water generated by the ship hitting the waves. Who knew a sailboat full of smelly adventure riders and motorcycles could light up the sea at night?