Exploring the quiet roads of Catalonia on BMW’s new G310GS

Spain. It’s one of the seductive countries, right up there with Brazil and Italy, beckoning travellers with its romantic culture and rugged landscapes, sultry beaches and spirited history. Who doesn’t aspire to know her? At the centre of the passion is Barcelona, the crown jewel of Catalonia, currently more famous for its bid for independence from Spain than for its vivacious art scene, delicious food, architectural wonders and, of course, its most valuable and best-kept secret: Catalonia is motorcycle paradise. What better place to sample BMW’s latest adventure model, the brand-new G310GS.

We spent our first day in Barcelona wandering its streets, holding our breath in the hush of the magnificent Barcelona Cathedral, eating plates upon plates of tapas, and then swearing to new diets as we watched the beautiful Spanish people playing on the beach. It happened to be the last day of the area’s biggest festival of the year: Barcelona La Mercè, the celebration of the city’s patron saint.

It’s impossible not to love this city, with its super-yachts and soaring temples. All at once modern and medieval, Barcelona is one of the country’s biggest moneymakers, drawing muchos turistas throughout each year. It’s really no wonder Spain doesn’t want to give her up, along with her beautiful, flowing skirt, Catalonia, a region of beautiful alpine mountains and prime Mediterranean shoreline.

Calm Before the Storm 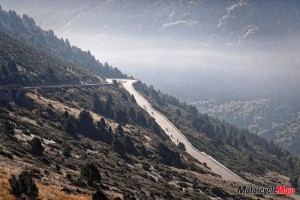 Our visit to Barcelona was only a few days before the now infamous referendum vote, where Catalonians were violently accosted by the Spanish military for attempting to post ballots in favour of independence. There was no hint of the commotion to come as we wound our way out of the city and into the Pyrenean foothills, just five of us in our group, plus a tour guide, being treated to an exclusive two-day preview of the G310GS.

The first thing to understand about this little bike is that it is not so little, at least in stature. In profile, it’s very proud, the beak-like fender and familial GS lines giving off a serious vibe. The seat height is also higher than you might expect of an entry-level bike, 835 mm (with an even taller 850 mm optional seat available). This makes for a comfy ergonomic ride while you’re underway, and because the bike is much lighter (169.5 kg wet) than your typical adventure bike, it feels very manageable at stops.

Not that we were stopping much. The Pyrenees are riddled with narrow, winding roads, and we were eating them up, one after another. You know that feeling when you’re riding with a group of people who match you perfectly in skill and speed preference? It’s magical. Like dancing. And as a female rider, it was extra fun for me that an additional two of our five were also women: Liane Drews, from BMW Munich’s marketing team, and Dorit Mangold, a Motorrad project manager, both highly skilled riders who, like me, typically ride much larger bikes.

But the fact is, because of its more manageable size and quick yet tractable handling, the 310GS is in many ways more fun to ride fast in the twisties than are larger, more powerful bikes. It’s all cake, with no stress over managing weight versus power versus braking distance – just dive right into the corners and wring it out. So enticing was this sense of play, we did a poor job of sightseeing as we rose out of the foothills and into the Pyrenean alpine. 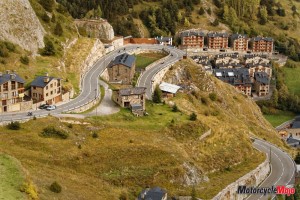 If you’re not a meat eater, you miss out on one of Catalonia’s highlights, Jamón Ibérico, a cured ham much like prosciutto, though saltier and a little sweet at the same time. It comes out with every meal and is delicious, and always with olives and crusty bread slices spread lightly with a puréed tomato sauce, the latter being a love/hate thing among our riders. Tapas are the other constant, and at our first lunch at Cal Joan Del Batlle, a family-owned stone lodge near La Coma, they were bottomless. Such decadence, this tradition of tasting so many different flavours and textures during a single meal.

In the afternoon, we had the chance to take the GS for a little off-road adventure, tracing a rocky two-track up a steep mountainside to reach an ideal photo opportunity. The bike was very eager in the dirt and, again, so easy to manage, thanks to its compact wheelbase, light weight and level-headed single-cylinder engine. The plan had been to ride over an extensive, unpaved mountain pass, but we were told recent rains had turned the area into a mud bog, so we were led back down to the pavement.

It’s possible BMW officials had nixed the longer portion of our off-road adventure to cut losses. We later learned several units had gotten tossed during a shorter, previous event, witnesses reporting rider error, which is the only logical explanation, as this bike feels quite competent off-road – especially if you keep in mind its intention as an entry-level machine. And on-road, it’s a total hero-maker.

Being back on the curvaceous pavement suited our group just fine. We’d eaten too many tapas to enjoy a high-altitude stand-up-on-the pegs workout anyway. 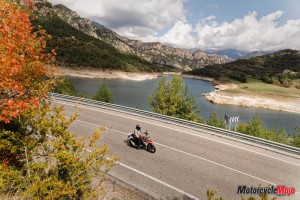 Andorra was new to all but our local guide. Nestled in the high mountains between Spain and France, it’s the 19th smallest country in the world by size, and 11th smallest by population. As soon as we crossed its border, Andorra shocked us with kilometres of unsightly duty-free shops and so many stoplights we stopped counting. It was horrid, really, after spending the whole day in such sublime scenery.

Eventually, the grind gave way to pleasing vistas and ski resorts, a much more palatable side of Andorra, which made us better understand why so many professional athletes – including MotoGP champion Marc Márquez – call Andorra home. Sure it’s the tax benefits, but Andorra also offers an ideal altitude for training, and once away from its cold-feeling commercial core, its art installations and alpine activities make it very inviting…