Even just talking about and being around motorcycles can lead to a slippery slope for the re-entry rider.

My last bike was a BMW R69S, which I sold in 1971 but have never forgotten. If, like me, you haven’t ridden a motorcycle for 45 years or more, don’t visit your brother-in-law and ride one of his bikes. This is the first step on the slippery slope of a re-entry rider. It’s the beginning of thinking about your previous bikes, imagining riding again and noticing bikes everywhere.

My brother-in-law has a couple of motorcycles and we talk about riding when together. He tells me how much fun it is and I tell him how much fun it was. He has modern technology and creature comforts on his bikes, and I tell him he’s a wuss. In my day, if it rained, you got wet; if the crud came up off the road, you wore it. We had no radio, cellphone, GPS or heated riding gear. I lie about how tough I had to be without all this sissy stuff, but I didn’t think I was hard up or deprived. I got where I wanted to go and had fun. That was the way it was and it was fun recalling those rides.

After my visit to the wuss-in-law, I noticed motorcycles more often and began talking with my wife about them. She has no interest in motorcycles whatsoever, but since I do, she listens. She’s kind to other dumb animals, too. 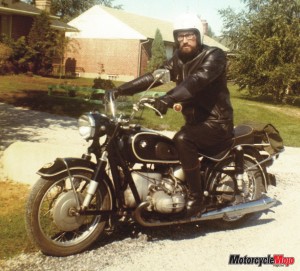 The motorcycle theme grew when I went to a bike show with a friend. I was overwhelmed by what I saw: so many bikes, new technology, riding gear and accessories! What a choice, and how does one make it? The desire for a bike went up a notch, but I resisted.

I attended another bike show and spent more time looking and imagining myself riding again. I was naturally attracted to the BMWs, but unable to buy. A new bike was expensive. I started looking for bikes online, where I found many that I would like. Still, I resisted the final decision to purchase.

I talked with my wife and she encouraged me to get a bike. In spite of her anxiety about me riding around on a motorcycle, she thought I would enjoy it. She must have realized how much I wanted to get back into riding.

I watched the online ads for motorcycles, and eventually I started to take notes on what was available. I still hadn’t decided on a brand, although BMW was still my brand of choice. I saw several that were attractive, but still couldn’t take the plunge.

A friend of mine who used to ride a BMW K75S thought a K75 would be a good option, and not long after, a former Toronto police bike came up for sale. I didn’t really want a K bike, as I was enamoured of the boxer series – I liked looking down and seeing the cylinder heads sticking out like the wings of a low-flying airplane as I rode along.

Despite this, my wife and I did go and look at the K75. Looking at a bike is not a good thing to do when consumed by the desire to ride again. Going to bike shows, reading magazines and talking about bikes is one thing, but standing in front of one and trying to resist buying is very difficult.

This particular bike was in a shed with snow on the seat. The sight appalled me. However, it made no difference. It started right up and I was, emotionally, already the owner of this bike and couldn’t shake the feeling. This is not an enviable position from which to negotiate a sale, and needless to say, I was unable to resist and bought the bike.

The next step was going to the Motorcycle Supershow at the International Centre – twice. The first time was to look around; for the second visit, I went with a friend who helped me spend my money on riding gear. I got pants, boots and a jacket. I had already purchased a helmet and gloves, so I was ready to go.

I had the bike delivered and was enthralled by it. Well, enthralled, but at the same time very anxious about what I had done. Could I even ride this machine after all these years? My riding with the wuss-in-law was one thing, but this was something else. I had spent a lot of money on this bike and gear and didn’t really know if I’d like it. Nevertheless, I spent more money and got insurance, even though it was too early to ride, and I signed up for a basic motorcycle course to get instruction and the feel of riding a bike again. It turns out I was lucky to have survived my early riding career, considering how much I didn’t know; I had no idea I was steering using countersteering, for example, or the front brake is better than the rear for stopping. I learned a lot more by reading all of David Hough’s books and was finally as ready as I could be for the adventure of being a re-entry rider.

The first ride on my bike was a timid, nervous and intimidating trip around the block. I got around the first corner and to the stop sign at the next corner, and managed to come to a shaky stop, but couldn’t figure out how to use the turn signals. I got back home after two more corners without stop signs and felt quite pleased that I hadn’t fallen off. I also read the owner’s manual to find out how the turn signals worked and began to ride. The local commuter train station near me was a good place to practise turns, stops and U-turns on the weekend, and I did ride after ride on the local country roads. I’m pleased to report that, after more than 120,000 km, most of them within 125 km of home, we are still riding together. Re-entry was successful!