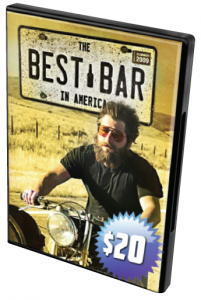 This film deserves some attention. Filled with fine acting and interesting characters, it had me wanting to pack my saddlebags and head for the southwest on a similar quest, but I don’t think my liver could take it.

Sanders, played by Andrew Rizzo, is a young, heavily bearded, downon- his-luck army vet initially hired to write a guidebook to the best bars in the American southwest. Ultimately stripped of all responsibilities and possessions, save his 1960 BMW R60/2 with Velorex sidecar, he embarks on a trip of self-discovery to write his own book about “the people, the culture and the campfire aspect” of the bars and taverns of the West.

The product of Eric and Damon Ristau, this film, also from 2013, is equal parts moody, philosophical and scenic. It’s filled with roads for riding, small towns for walking, bars for drinking and maybe a good steak, roadside camping by an open fire, and the quest for living a meaningful life.

Guided by the older and sage Northway, played by David Ackroyd, Sanders ends up exactly where he should be.

Purchase the DVD for US$20, or download for US$9.99 at bestbarinamerica.com.