Remembering a town that was

I was going to say goodbye to a little town called Jordan River on the southwestern edge of Vancouver Island, about halfway between Sooke and Port Renfrew. The hamlet is on a stretch of Highway 14 (also called the West Coast Road) that hugs the western shoreline, and happens to be a particularly delicious section of the infamous Cowichan Loop, a “must ride” for those who come to Vancouver Island. But big changes were afoot in the little town of Jordan River. I’d read that after a major seismic study conducted by B.C. Hydro, the corporation decided to purchase and demolish all of the homes along the waterfront. They had determined that in the event of a significant seismic event (and everyone out here is just waiting for The Big One), their dam upriver could burst, wiping out the small hamlet. 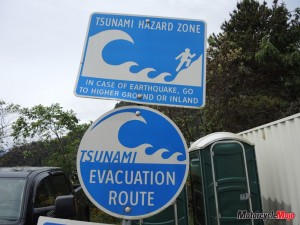 Poor little Jordan River is caught between a rock and a hard place, or, more accurately, a tsunami danger zone and a dam that could burst. Last spring, I called Ted Olynyk, spokesperson for B.C. Hydro, to find out about the future of this section of the Loop, which is also a surfer’s paradise. Olynyk says quite frankly that if there is an event strong enough to blow the dam, the flooding caused by the dam would be the least of the inhabitants’ worries. “It would take a catastrophic event to cause the dam to burst,” he notes. But of all their facilities across the province, this one has the highest probability of failure, owing to its proximity to a fault line, so B.C. Hydro decided to be proactive by offering to buy properties to try to move residents out of the danger zone. Only one man, 72-year-old Hugh Pite, who is an avid surfer, has refused to sell off his little bit of paradise. But he’s going to be awfully lonely.

I remembered Jordan River as a beautiful little stretch of the Loop and wanted one last look before it was all gone. As soon as camping weather arrived, I hopped a ferry on the mighty V-Strom and was riding the sinuous coastal road north to Jordan River, expecting to see a series of empty or boarded-up homes and businesses, but something still recognizable – a bit of a coastal ghost town that would at least make for some good photos as a reminder of what was. But what I discovered was a sad scene: Most everything had already been torn down and there was really nothing left of Jordan River. Where once had stood a town with a century of history that had survived multiple changes of fortune, with beloved cottages and flourishing gardens, now stood empty with dying gardens surrounded by construction fencing and No Trespassing signs. Other than Mr. Pite’s cottage, hemmed in on both sides by torn-up lots and wire fencing, it looked as though the town had been hit by bombs. 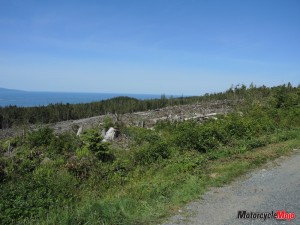 The campground where I had intended to stay was gone as well – I was too late. A painful reminder that nothing lasts forever. I stood on the empty road in the middle of what used to be a vibrant little hamlet, remembering how bucolic a scene it had been. Today, it’s nothing but a memory along this now desolate piece of road. I needed to cogitate and decide whether there was a story here at all; frankly, I was saddened by the whole situation and wanted a bit of time to process it. I love small towns and am always sorry to see them struggle, but this was something else. It was getting late, so I carried on north on the West Coast Road toward Port Renfrew, and hopefully a place for my tent. The road was almost completely deserted for the entire trip.

This section of the Loop, from Sooke to Port Renfrew, is a rider’s dream: a two-lane road with small, soft shoulders, very narrow, as full of twists and turns as your small intestine (Disclaimer: I am not a doctor) and elevation changes. “This is the kind of highly technical riding road that, if you don’t pay attention, would be easy to go off,” I thought as I slightly overcooked a tight left-hander on my fully loaded V-Strom and slid from the payment to the tiny soft shoulder (precisely one tire-width wide, apparently), just to test my recovery skills. Time to slow down. I came around a right-hander and saw a deer nibbling a bush right at the edge of the pavement. I could have reached out and touched her. “Boy that was lucky,” I thought to myself. “Imagine if she had stepped onto the road,” as I brought my eyes back to looking where I wanted to go.

Clipping the inside of another right-hander, I got a bit of a jolt. A black bear was sitting right on the centre line of the empty road. He turned his head, looking as startled to see me as I was to see him. Fortunately, he had no interest in meeting me and jogged back into the woods that came nearly to the edge of the pavement. Being even more wary and mindful of speed limits, I had the time to look around and now noticed how acres of land had been clear-cut by logging companies, leaving ugly scars on mountainsides. Another painful reminder that nothing lasts forever. 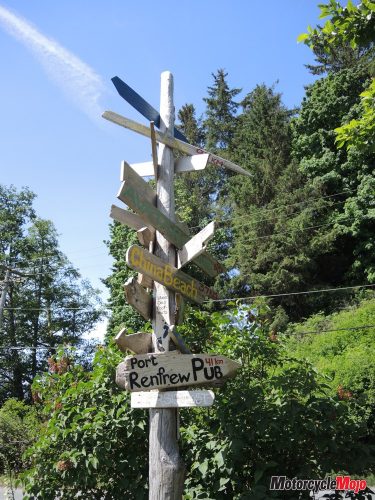 Amazingly, I arrived in Port Renfrew alive, and on the advice of a local, found the Pacheedaht First Nation Campground just outside of town. Friendly staff and camping right on the beach for $25 could not be beat. There were no other campers anywhere near me – my own slice of heaven for the night. So there I was, gazing at the driftwood-covered beach and the water, listening to the waves and the wind in the trees. I contemplated the yin-yang of my day and the inevitability of change. I had seen plenty that had disturbed and saddened me, but more that had energized and excited me. It was then that I decided to ride back down to Jordan River the next day, take photos and write this story as a way to remember the hamlet that was. So get out there and ride the Cowichan Loop. Maybe pay this little “town that was” a visit while you still can – and maybe take a snorkel, just in case.