Small-displacement adventure for the masses

Affordable small-displacement bikes are taking an ever-bigger share of the market in North America, where big bikes have ruled for more than three decades. Many baby boomers, responsible for feeding the motorcycle industry since about the mid-1980s, have since grown out of motorcycling and into other leisurely pastimes like boating and RVing. Motorcycling can therefore use an influx of new, young riders, but those new riders don’t want to be forced onto diminutive beginner bikes; they want full-size, easy-handling and affordable motorcycles. To meet those needs, Japanese and European bike makers have introduced several appealing sub-400 cc models in the last few years, including sport bikes, naked bikes and dual sports. Among them is this latest offering from BMW, the G310GS adventure bike.

You may have read Jamie Elvidge’s travel article through the Pyrenees aboard a G310GS in Mojo’s December world travel issue. I also got a chance to ride BMW’s smallest adventure bike at its world launch, and was afforded ample time to technically evaluate the second BMW model based on the made-in-India G310 platform in a variety of conditions – it proved to be a worthy addition to this growing market segment. 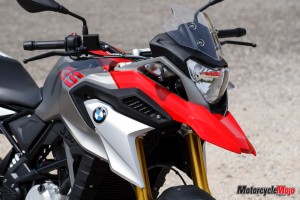 At $6,450, the G310GS costs just $150 more than its only real competitor, the Kawasaki Versys-X 300, though the former includes BMW’s three-year warranty, which for a beginning rider is a big factor to consider when looking at long-term operating costs. However, it costs $1,200 more than the G310R, with which it shares most of its major components, including the frame, engine and brakes. The main differences between the GS and the R are in the suspension components, bodywork and wheels. The GS has more suspension travel, at 180 mm front and rear (140 and 131 mm for the R); it has a GS-inspired frame-mounted half fairing, a 19-inch front wheel versus the R’s 17-incher, a taller-profile rear tire (150/70R17 vs. 150/60), and serrated metal foot pegs for an improved foothold off-road.

You can also switch off the ABS when hitting the dirt, and you can do so on the fly.

Despite utilizing the same frame as on the R, steering geometry is a bit more relaxed thanks to the taller suspension and larger-diameter front wheel. Seat height is also 50 mm taller, at 835 mm, though reach to the ground is still relatively easy, partly due to the softly sprung suspension. The digital instrument panel offers a surprising array of information for a bike in this price range, and displays speed, engine revs, gear position, time, fuel level, two trip meters and fuel consumption info. Some cost-cutting measures are also evident, like limited suspension adjustability (only rear preload is adjustable), and the absence of reach-adjustable levers. Fit, finish and build quality, however, seem above par for its class, but more on that later. 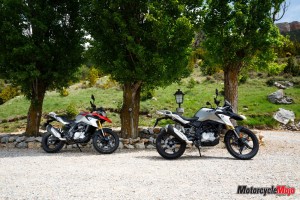 The G310GS has an entry-level price and engine displacement, but it doesn’t feel like an entry-level bike. This is a full-size motorcycle, and it weighs in at 169.5 kg wet, 11 kilos more than the G310R, but 5.5 kg lighter than the Versys-X. Its 313 cc liquid-cooled single is identical to the R’s, claiming 34 hp and 20.7 ft-lb of peak torque, though fuel-injection mapping is slightly altered to accommodate a different muffler.

The riding position is upright, though the handlebar is too low for my six-foot stature when standing up. Some handlebar height could be added by simply pivoting it upward, though aftermarket handlebar risers would be a good addition for tall riders. Legroom is cramped with the standard seat, and during my ride, I missed out on an opportunity to swap out the stock seat for the optional, taller 850 mm seat, which would have been more accommodating. Behind the seat is a very robust luggage rack, a cue that the G310GS is designed primarily for markets where small bikes carry big loads. 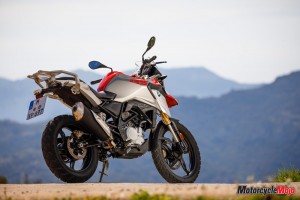 A light clutch launches the bike easily, and at a fast pace on twisty roads, my left foot was busy keeping the engine above 6,000 rpm to maintain momentum while exiting turns. As I’d noted in my review of the G310R (Motorcycle Mojo, May 2017), the engine feels powerful enough to pull taller gearing, though the taller rear tire on the GS seems to have cured the bike of the shortish sixth gear that had me searching for a seventh on the R.

On the highway, the engine spins at around 7,000 rpm at 110 km/h (redline is at 10,000 rpm) and there’s ample passing power available from about 80 km/h. The counterbalanced engine is relatively  smooth below 100 km/h, but buzzes through the handlebar, foot pegs and seat above that speed. One thing I hadn’t noticed was the piston-slap-like knocking that I had noted on the G310R when it was hot at idle; it seems BMW performed some improvements before beginning production, an effort confirmed by product manager Jörg Schueller, who told us that production of both G310 models was delayed while quality control among suppliers was improved to meet BMW standards.

We began the day’s ride with a 45-minute stretch of highway, where aside from feeling slightly buzzy at speed, the G310GS felt very comfortable sustaining 120 km/h. The fairing offers some wind protection for the torso, and an accessory taller screen will no doubt be available soon to offer even better wind protection. We then turned onto some winding roads that led to a brief off-road section along the route.

We rode the winding gravel roads for only about 15 km, but this was enough to reveal the GS’s surprisingly compliant suspension, which made small bumps, dips and ruts disappear without wallowing. The dirt roads we sampled were ideal for this machine, as they were mostly smooth and hard packed with some humps that served as small jumps at speed. The suspension is well suited for light-duty off-roading, though the fork topped out with a light clunk when the front wheel left the ground off the humps, and although I never jumped the bike high enough to bottom the suspension hard, it did soak up all of its travel and bottomed lightly after landing from more enthusiastic launches. If you’re looking to partake in more aggressive off-road riding, the bike would likely handle it better with some suspension modifications, like installing firmer aftermarket fork and shock springs.

Its easy-handling nature inspires confidence on the road and on hardpacked dirt, which is what may have led a few of the test riders at the launch to push harder than the street-oriented dual-sport tires could handle, and consequently, a few bikes hit the ground after washing out the front tire during photo shoots. No one was hurt, and it must be stated that these unfortunate dismounts had absolutely nothing to do with the machine, but rather more to do with overzealous riders attempting to achieve road-racing lean angles for the camera, on and off the pavement – on entry-level, small-displacement adventure bikes.

In the afternoon, we rode on some very twisty paved roads, and this is where the GS really impresses. We picked up the speed to what I consider a very spirited pace, and the GS handled everything from tight, near-switchback-like curves to fast sweepers without a hiccup. The Metzeler Tourance tires provided enough grip to wear right up to the edge, and despite its soft suspension, the bike never wallowed or weaved, displaying exemplary stability. The only caveat – and this is due to the soft, long-travel suspension – is that you can’t approach corners while hard on the brakes. The bike dives considerably when on the binders, so you have to brake sooner and smoother for corners, to which it responds with an impressive amount of cornering speed. When riding at the bike’s limits, you have to work the gearbox frequently, though it shifts smoothly with a light touch, and this adds to the overall fun.

However, it’s not all praise for the G310GS. The journalists who’d sacrificed their reputations in the interest of crash testing earlier in the day revealed that the G310GS doesn’t crash very well. In one case, a bike sustained substantial damage after a mild low side on dirt, including a bent handlebar, a damaged front master cylinder and a bent muffler support, which rendered the bike unrideable. Admittedly, I didn’t see the crash, but it was a relatively minor low-speed get-off, since the rider’s street gear wasn’t torn or otherwise damaged. The type of crash damage sustained tells me that some of the alloys used are soft – or maybe not, given I’m not a metallurgist – but as a former mechanic, I’ve seen my share of crashed bikes, and motorcycles can usually take a fair amount of abuse before exhibiting the type of damage seen on the GS.

Despite this, the 2018 BMW G310GS checks several boxes that should make it a success. It has a small-displacement engine that’s powerful enough to be engaging, while claiming a very frugal 3.3 L/100 km. Thanks to its smaller displacement, the GS will be inexpensive to register and insure. It’s a stylish light-duty adventure bike that’s sized for adults rather than being a three-quarter-scale beginner bike, and it’s a great urban runabout. It’s also attractively priced. Like its bigger GS siblings, this smaller GS is ready for a wide range of conditions, and it should serve as a great stepping stone to larger adventure bikes for budding dual-sport riders.