Just keep looking where you want to go

I had been looking at maps of New Hampshire all winter, so it should come as no surprise that by mid-July I would find myself here. Wasn’t that, after all, what my off-road instructor at S.M.A.R.T. Adventures had told me: “You’ll ride where you look”? It’s a truth about life in general, I have learned. So when I rolled into Littleton, N.H., I was ready to embrace the town’s motto. Banners lining Main Street urged me to “Be glad – and make the world a happier place.” Littleton, it turns out, was the hometown of author Eleanor H. Porter, creator of the world’s most optimistic character, Pollyanna, in 1913. A bronze statue of the girl, arms outstretched to the sky, stands in front of the town hall. And visitors often rub her foot for good luck. Crosswalks painted with her silhouette instructed me to Stop, Look, Wave. It all seemed a bit, well, Pollyannaish, but the fact remains that choosing to focus on the bright side does tend to take you in that direction. So why not go with it? 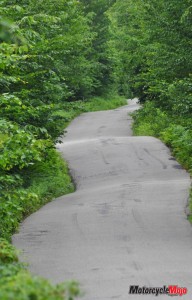 Just 10 minutes farther, I came to Franconia, and the home of poet Robert Frost. I toured the small grounds, which included a walking trail through his meadows and woods. Every 20 metres or so, one of his poems (including my favourite, “The Road Not Taken”) was posted for hikers to stop and ponder. I then travelled another 15 minutes down Highway 3 to Flume Gorge in Franconia Notch State Park. The Flume is a natural gorge extending 241 metres at the base of Mount Liberty. The granite walls rise 27 metres straight up and are only four metres apart where the Pemigewasset River rushes through. It was discovered in 1808 by 93-year-old “Aunt” Jess Guernsey when she was out fishing. Back at the cabin, she had trouble convincing her family of her amazing discovery, but eventually persuaded them to come and see for themselves. Since then, the Flume has continued to attract sightseers from far and wide.

Northern New Hampshire’s landscape is one of pointed or gently rounded mountains and blanketed by green forests. Here and there, sheer faces of rock appear where the side of a mountain has slid away. I’m in awe of it all on approach to my final stop of the day in White Mountain National Forest, where I’d be camping for the night. I’d discovered the site on Gale River Loop Road courtesy of freecampsites.net.

Not only was it free, in exchange for no services, I got a spot more quiet and secluded than any developed campground I’ve found – just me and the songbirds. 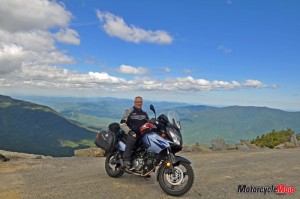 I awoke to a nearly cloudless sky and made my way along Highway 3, a National Scenic Byway, to Lincoln and the beginning of the Kancamagus (pronounced kan-ca-MAW-gus) Highway. Also a National Scenic Byway, “the Kanc” is known to local riders for its good surfaces, scenic lookouts, and lots of twists and turns. Opened in 1959, the route through White Mountain National Forest was named for Kancamagus (“The Fearless One”), Indigenous chief of the Penacook Confederacy of nations. He tried to maintain peace between his people and the whites, but harassment from the English provoked this hot-tempered warrior until he declared war. He and his people were defeated, however, and they moved farther north, possibly into Canada.

At Passaconaway (named for Kancamagus’ father), I turned north on Bear Notch Road, a route that is closed in winter but still paved and in fair condition. I then followed Hwy 302,
the White Mountain Trail (yet another National Scenic Byway) to Twin Mountain, where I made a loop out of Highways 115, 2 and 16. This brought me to Gorham for lunch before I tackled the famous Mount Washington Auto Road. At 1,917 metres, Mount Washington is the highest peak in the northeastern United States. The summit is above the treeline in the alpine zone, and it has been a destination for hikers since the 19th century. The first summit hotel, which was built in 1852, is now long gone, but visitors can still tour Tip-Top House, an old accommodation and restaurant at the peak. The structure is unusual in that it’s bolstered by thick walls of boulders to withstand the extreme weather – in fact, it was at the top of Mount Washington that scientists measured what turned out to be the second-fastest surface winds ever recorded on the planet: 372 km/h. 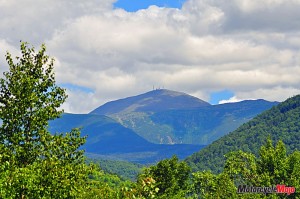 I was particularly fortunate to ride the mountain on a relatively clear day. It’s shrouded in fog 300 days of the year, but on crystal-clear days (usually in February), you can see for 160 km – a radius great enough to include five states and the province of Quebec.

While its elevation doesn’t match that of Pikes Peak in Colorado (4,302 metres), the vertical rise is similar. I’ve ridden both, and I have to say I found this ride slightly more daunting. The road up Mount Washington was barely two lanes wide, and oncoming traffic often encroached on my side. With no real guardrails (okay, there were a few rocks, but these seemed more like decoration), I was feeling “alert.” Add to that a section of gravel road about halfway up the mountain and, truth be told, I was relieved to drop the kickstand at the top. What got me there was realizing it was a psychological game.

“You’ll ride where you look. So look where you want to go,” my off-road instructor had repeated. I had already hit two saplings that day in the woods. But when I applied my target fixation to the trail itself – Bingo! – I was trail riding! So this was no different. Don’t look at the steep mountainsides falling away into nothing on the borderless edges of the road. Look where you want to go!

Coming down didn’t seem as difficult, as it more often put me in the lane closest to the mountain. And I began to chide myself for being a chicken. Suffice it to say I have a new appreciation for vehicles sporting the sticker “This car [or bike] climbed Mt. Washington,” and I will display mine proudly. It is not (and this is just my opinion) a route for new riders. On the other hand, to put this in relative terms, in 150 years, there have only been three deaths on the Auto Road, while signs throughout the state urge caution regarding moose, as there are hundreds of collisions each year. And I was completely comfortable with that. As with any of life’s activities, I reflected, it’s all a matter of perspective.

I stayed at another wild camping site in the White Mountains near the town of Intervale, down a long gravel road beside a babbling stream. I awoke to rain at 6 a.m., which soon stopped. On the recommendation of a local hiker, I had decided to stay in the area for another day just to ride Hurricane Mountain Road. “It’s a narrow, winding road up over Hurricane Mountain,” he said. “It’s closed in the winter, but even in summer, RVs and campers are prohibited. In fact, some of the big Harleys have trouble on the switchbacks. You’ll love it!” An 80 per cent chance of thunder-storms caused me some concern. Nevertheless, I set out. The name of the road was just too enticing. And Hurricane Mountain Road lived up to its billing, twisting back on itself, rising and falling, frequently and rapidly.

In truth, it was not unlike the Mount Washington road, the only difference being the stakes were not as high in the event of a miscue. The psychological game was much easier here. After a few thrilling kilometres, I was deposited onto Highway 113 north toward Chatham, and to my surprise, over the state line into Maine. I had not realized I was so far east. But even without the welcome sign, I knew something had changed. The smoothly paved road came to a sudden end, followed by tar and chip that was potholed and littered with sand. The roads had suffered from Maine’s harsh winters, but apparently Maine’s road repair budget was not up to the task. I wondered if it was short-sightedness or grim resignation on the part of the state’s decision makers.

The road north improved as it drifted back over the state line and the winding, rolling 113 put a smile on my face. Such a smile, in fact, that after lunch in Gorham, I returned via the same route, this time a little faster with the confidence that comes with familiarity. Few cars and lots of curves – what a ride! Somewhere I missed a turn, however, and found myself on a road that was under construction. Signs read “Motorcycles Use Caution.” I thought, “Yes, they do. But we’re also done being chicken!” While some sections were hardpacked, much of the 20 km stretch was unusually large, loose gravel. I could feel the bike move side to side under me, so I got up on the pegs, reminding myself of other lessons learned, and some I may have even repeated out loud: “Momentum is your friend. Because of centrifugal force, the bike wants to stay up; don’t fight it. Hold the handlebars loosely, like eggs.

Steer with your feet. Look ahead.” Just then, an impatient cager pulled out to pass, and while doing so, kicked up a large rock that hit me square in the face shield. I thought of NHL goaltender Gerry Cheevers, who used to draw stitches on his mask wherever the puck struck his face. Here was a case for wearing a full-face helmet on your ride. Despite the challenges, I stayed vertical to the end and made another deposit in the confidence bank. When It’s Over I stopped for a trail mix snack at a rest stop where a family had finished their picnic and were now playing kickball. When the four-year-old spotted my motorcycle, he pointed in my direction while looking to his father for permission.

At the nod, he came running over. “That is so cool!” he gushed. I asked him his name and if he was in school. But getting right to the point, he looked at me hungrily. “Mister, when it’s over, do you think I could have that motorcycle?” To be honest, I was not sure what he meant: When my ride was over? When I’m ready to sell? Or did he mean the Big IT? I replied that when the time came, I was sure he’d find a way to get a bike. And then, perhaps because it was fresh in my mind, it rolled off my tongue: “Just keep looking where you want to go.” As I returned to my campsite for the night, I realized the forecasted thunderstorms had never materialized, and I was glad I had focused on the positive. Nestling in, I said aloud, “It would be a shame if today had never happened.” Maybe Pollyanna was on to something. I’m convinced my instructor was.