On September 30, 1967, the one and only Canadian road-racing Grand Prix ever staged took place on the 3.9 km Mosport circuit 100 km northeast of Toronto. Opened in 1961 and still in use today in essentially unchanged form, but with heaps of extra runoff and rebaptized as the Canadian Tire Motorsport Park, this high-speed roller-coaster racetrack is one of the most challenging permanent circuits in the world. It features significant changes in elevation, copious blind apexes and an undulating main straight where top-gear wheelies are a matter of course.

From August 10-12, 2017, Canada’s Vintage Road Racing Association (VRRA) staged a commemorative event as part of its annual Mosport Vintage Festival. Alongside a full race program, this included a series of parades featuring some of the actual bikes and riders who took part in the Canadian GP meeting 50 years ago, as well as more modern road-racing stars like former 250 cc World Champion Rod Gould, and his 750 cc counterpart and three-time Canadian champion, Steve Baker, whose career was sadly ended in 1988 after a serious crash at Mosport. 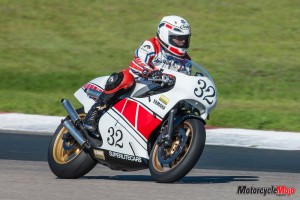 With Canada celebrating its 100th birthday as a nation in 1967, the Federal Centennial Commission underwrote the costs of bringing the world’s top riders and their machines to compete in the season-ending Canadian GP race: the final round in the 500 cc World Championship so closely contested by Honda four-mounted Mike Hailwood and his former teammate at MV Agusta, Giacomo Agostini on the Italian triple. The 125 cc and 250 cc races were also held, although in these classes, the Canadian GP was the penultimate round.  Yamaha’s Bill Ivy was cake-walking his way to the 125 cc world title under a factory-brokered prior agreement with teammate Phil Read, whose role instead was to focus on regaining the 250 cc world crown from reigning champion Hailwood and his six-cylinder Honda. All three races attracted many American entries from across the border, which actually outnumbered the local Canadian riders in the 125/250 cc grids.

Race day was cold but initially dry, though it attracted a poor crowd of just 5,000 spectators. The 125 cc race was first up, with the disappointingly small grid of just 19 riders, led by Ivy as the only GP regular to take part (teammate Read was saving himself for the 250 cc race immediately after). Ivy duly cruised to victory on his factory V4 Yamaha RA-31 by two laps after stopping to take on water – bike, not rider. Behind, Massachusetts club racer Bob Lusk – who immigrated soon after to the United Kingdom, where he’s still racing today in CRMC events – held second place for a long time on his Yamaha single, a converted YA125 streetbike complete with pressed steel frame, before slowing to be passed by Canadian Tim Coopey.